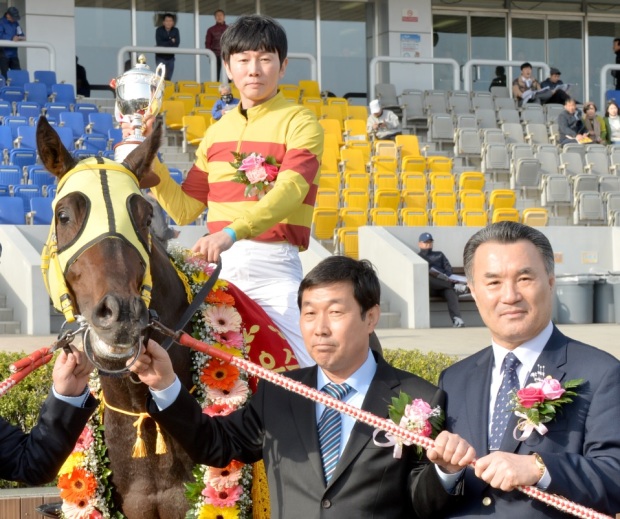 Trainer Kim Young Kwan (2nd from right – Pic: KRA) saddled Divide Wind to win the KRA Cup Mile last Sunday. It was the dominant trainer’s 38th Korean Group winner. Kim only sends out four runners at Busan on Friday but three of them will be expected to win: SPOT in race 1, SUN DAY in race 5 and HI SEXY in race 10. Here are the previews:

(12) SPOT has run 3rd on both starts so far and surely makes the breakthrough today. This looks a softer maiden than his previous two and despite having the widest gate, Kim Young Kwan’s colt should be on speed early and have far too much. (8) EVELYN was 2nd on debut all the way back last November. She returns today having trialled up well enough two weeks ago and is surely the main danger although (9) MYEONG GONGJU was promising enough on debut at the end of February and could improve. (1) KWAEHAN SINGANGJA overcame a poor start to run 5th behind Spot last time and should be looking to better that today while of the three debut-makers, (11) SUPER GOLD looks the most likely to attract interest first-up.

(2) USEUNG TEN hasn’t been too far away in any of his six races to date and while he has looked a little one-paced, could well have enough to prevail here. He most likely won’t lead early but can be handy and steadily improve. Hanse filly (8) BAEKDU QUEEN improved into 3rd place last start over 1200M and can continue her upward trajectory today. She’ll be expected to be on the early pace alongside (1) GEODAEHAN WONSEOK who recorded her best finish so far when 5th of 12 over this distance two weeks ago and can be in the hunt for even better today. Aside from those we’re really looking for ones who can show things they’ve not managed to do so far. Of them, Useung Ten’s stablemate (4) EONJENA SEUNGNI and (7) SECRET MEMORY, who races at further than the minimum distance for the first time, are perhaps the most likely.

Small but competitive three-year-old maiden here. (1) TEXAS SIDAE was sent off as favourite for a similar contest on March 23rd but didn’t perform well, coming home in 3rd place, a head behind (5) EL DRAGON. He started poorly that day and never looked wholly fluent but is probably worth another chance here. El Dragon outperformed expectations that day but she can build on it here and can go close again. (2) DAEHO MYEONGGA went well in 4th on what was his first try at this distance a month ago and will be expected to be on the early pace here with chances of going all the way. (3) GAMDONGUI SUNGAN stumbled out of the barriers last time out but still finished only about half a length behind the second place-getter. He steps up to a mile for the first time. So too does (4) GANGHAN JILJU, who is a slow starter, but has run on well in both his latest two efforts at 1300M and could appreciate the additional trip today.

Just beaten a head when favourite over 1000M last time, (1) HOTHAE steps up in trip for the first time today and will be hot favourite to score. He came out of the widest gate that day but from the inside today, should get on to the lead early and it would be a big surprise were he not to win. (3) NOPIGOM NAREUSYA finished behind Hothae two starts ago when the pair raced 7th and 4th over 1000M but went really well over 1300M on his latest start four weeks ago, just going down by a neck in a tight three-way finish. He can join Hothae on the early pace and can compete all the way.  (6) EVER GOOD TIME has shown glimpses of ability and can compete for the places in this company. (9) B.K. MARINE’s disappointing showing last time was explained by her returning slightly lame. Back fully fit, she too is in the placing frame. (10) ACE PARAGON did nothing at all on debut three weeks ago but hopefully learned a bot from it and can improve here.

(6) SUN DAY made all to win by five-lengths over 1000M on debut on March 23rd. She is up in both class and distance, but Kim Young Kwan’s filly will be strong favourite to repeat, and she is hard to oppose. (8) ARAM NARAE began her career with back to back 2nd place finishes at 1000M and 1300M. She stepped up to a mile for her third outing and did ok but comes here following ten weeks off and can be a danger. (3) JANGSEONGUI JILJU was a surprise all the way winner at 1200M on March 9th. Blinkers went on that day and seemed to do the trick and while it’s a tough ask to follow up, she can go close here. (4) REALLY QUEEN has been a little cold of late – and was lame last time – but she is a class and distance winner and can return to form. (11) SUPERNOVA IJI did exactly that – returned to some form – last start running a good 3rd in a similar race to this and should be in at least the placing frame again.

Wide open contest this but we have a couple of races of reference. Firstly, four of them raced each other at class and distance on March 18th with just a head splitting (9) SAENURI CHOEGANG in 3rd and (8) STAR LINE in 4th. They come in with similar records and both should go close again but we’ll go with Star Line to get the job done this time. The other race of reference took place two weeks earlier on March 2nd when (3) ISIDAE YEONGGWANG came 3rd, a nose ahead of (11) DANCING BLAZE. The air faced each other again two weeks ago when Dancing Blaze came out on top, equalling her career best finish of 2nd. Both should be close again although the other pair should perhaps be a touch more progressive. In that March 2nd race, (6) STORMY MAGIC finished well back but could improve today. (7) THUNDER ALLEY ran well in 5th in a tough contest two weeks ago and can build on that here.

(5) BANJIUI JANGMI returned from five months out to run a solid 4th of 9 over 1300M three weeks ago. Thomas Gillespie’s filly should be on speed early here as she drops back in trip and can find her way back into the winner’s circle for the first time in more than a year. Gillespie comes in with two and his Aussie-bred filly (1) GOOD BAND has claims of her own. She ran a good 3rd on debut at the end of December before having a harder time in her return at 1300M in January. She comes back fresh after eleven weeks and is another who may well like the minimum distance today. Last time (7) YEONGGWANGUI FORE ran at this distance, he won at it and he’ll be in the frame again while the very experienced (11) DAEHOYEOJANGGUN enters in consistent form and it would be a surprise were he to finish outside the money. The wildcard is the straightforwardly-named (2) GENERAL. The six-year-old has only ever raced nine times but has shown he has talent. He makes his latest comeback almost exactly one year after his most recent race and looked good in a March trial.

It took (7) GREAT ROCK a couple of goes to figure things out but he’s won his latest two and finds himself up in class once more today. Last time out he got the better of another promising one in a photo-finish with the pair of them eight-lengths clear of reasonably strong field and he should have enough to cope at this level too. (9) FREE RUNNING has come up short in his latest couple, but both those races had a bit more depth than this one and he is a winner already at this class already. (3) MASTER WIN was favourite last start over 1200M but got a bad trip the whole way around and finished well down the field. He needs a better start today, but he can be given another chance. (8) DINAH can improve on recent outings too while (6) OHO DAEJANGGUN scored a good 3rd place at class and distance a month ago and a repeat is not impossible.

After seemingly having lost his way a little, (5) QUE SERA SERA returned to form and beat (3) LOAD CELL and (1) BAEDARI HANI as the three of them filled out the top of the board at class and distance on March 11th. Bart Rice’s gelding carries an extra 4kg today but don’t rule out a repeat. Likewise, that was a third consecutive near-miss for Load Cell and she’ll be close again while Baedari Hani led for much of that race and should be on the early speed again. The trifecta could well involve all three again and it could be in any order. However, it is possible that none of them ends up as favourite. (6) SUN LAZER was 5th on his first try at this class, a strong contest over 1400M at the end of February. He comes in fresh after seven weeks and has every chance. The 7th place that (2) BUGYEONG DAEBAK managed at class and distance on March 11th was better than it looks on paper. It was a strong race, the margins weren’t huge and it was just her second defeat. She will be expected to get out in front here and has every chance.

(2) HI SEXY has come home in 2nd place in both her two tries at this level so far, the most recent of which was at this distance on March 2nd. She didn’t start especially well that day and although she quickly got back on pace, she was unable to respond when ground down by a decent one (Speed Mark) in the closing stages. Nevertheless, it was still a good effort and she has every chance of going one better today. Korean Derby runner-up (8) ROYAL RUBY has run well in two starts back following six months out and beat four of these on his way to 3rd place at 2000M last time. It’s interesting to see him dropped back to a mile today and the strong closer has a chance. Also dropped back in trip is (5) HELLO VENUS. She beat Royal Ruby on the latter’s return in February and should be up on the speed early. She carries more weight today but can’t be ruled out. This is a strong race and while those three look to be the picks, good performances from the likes of (3) IRON TRAIN, who was just half a length behind Royal Ruby last start, and (9) TRIPLE PARTY, 3rd in a good race at 1400M last time, are also possible.