If there is a Korean Triple Crown winner in 2018, then his name is Divide Wind. The Menifee colt beat out stablemate and favourite Ecton Blade to win the first jewel, the KRA Cup Mile at Busan on Sunday afternoon.

Divide Wind entered the race having won his latest three with ease, including the Gyeongnam Shinmun Cup, a trial for this race, a month ago. In the parade ring and on the way to the gate he was the clear standout of the field, ahead of the champion juvenile Ecton Blade, who started to sweat up on what was a chilly Spring afternoon. 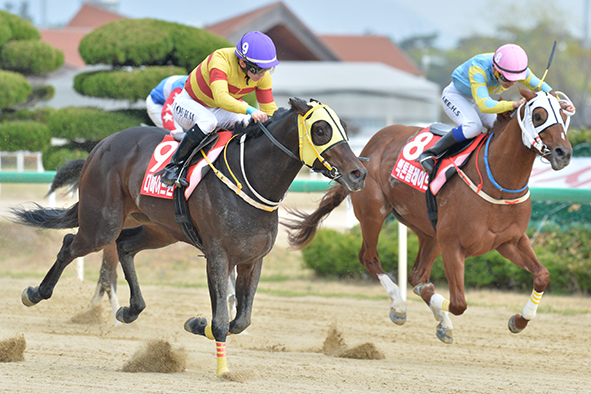 After the start was delayed to allow Gaon Champ to be backed out of the stalls and checked over, it was Gaon Champ himself who took command early along with previously unbeaten filly Yeongcheon Derby. Their challenges would fade though as Ecton Blade and Divide Wind came into contention at the top of the stretch.

With World Sun also c losing at speed, Divide Wind ended up too strong for Ecton Blade and took the win by three-quarters of a length on the line. Yeongcheon Derby was 3rd while Mask was Seoul’s best finisher in 4th.

It’s yet another big race 1st and 2nd for trainer Kim Young Kwan.

The 21st Korean Derby, the 2nd leg of the Triple Crown, will be run at Seoul Racecourse on Sunday May 13th as the curtain-raiser to the Asian Racing Conference, which kicks off in Seoul the following day.