Both Seoul & Busan hosted big, valuable races for two-year-olds on Sunday. Last year the winners of the corresponding events turned out to be Cheongdam Dokki at Seoul, who has gone on to become one of the highest rated horses in Korea; and I’m Your Father at Busan, winner of July’s Busan Mayor’s Cup. This time 8/1 chance Yeongcheon Derby took the honours on the south coast in the Gyeongnam Do Min Ilbo Cup, while in the capital, P.K. Party maintained her 100% record by winning the Nonghyup Chairman’s Trophy. 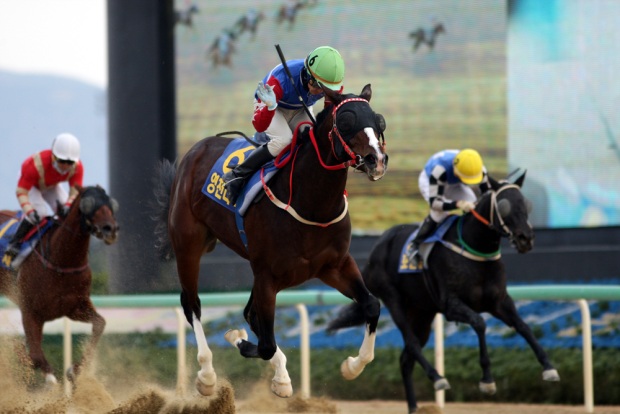 Yeongcheon Derby was a comfortable winner at Busan on Sunday (Pic: KRA)

Seoul’s race was especially competitive with almost half of the 13-strong field arriving hitherto unbeaten. Despite having won all her five prior races, P.K. Party, the only Korean-bred among them (imported in-utero) and one of only three fillies, was only sent off as fourth-favourite in the market. As it transpired, she made all, bounding out of gate 7 under Kim Yong Geun and holding off the late challenge of OP Seven to win by half a length on the line and secure another big race win for trainer Song Moon Gil, who was recording his eight Group or Listed victory of 2017.