There isn’t a jockey challenge bet in Korea but if there was, yesterday at Busan it would have been a two-man race with Jo Sung Gon and Ikuyasu Kurakane dominating the Friday afternoon card.

Of course, punters had seen this coming. With the likes of Kim Yong Geun, Choi Si Dae and Masa Tanaka among eight Busan riders in Seoul for the President’s Cup on Sunday (Union rules say a jockey who has the temerity to go and ride in a big race at the other track isn’t allowed to ride at his or her home track on the same weekend) and You Hyun Myung on the long-term injured list, Jo and Kurakane were really the only Big Beasts of the weighing room in action.

Jo Sung Gon managed to get himself beaten on two favourites but like Kurakane, still emerged with four winners from the eleven-race card.

Highlight of Jo’s winners was perhaps a dominant victory for the young US import Doraonpogyeongseon (Kantharos) the third of his four winners which all arrived consecutively in races 5 to 8. Doraonpogyeongseon, named after a Grand Prix winning horse of the 1990’s, was getting his maiden win on his second start.

Kurakane’s winners arrived in pairs. He rode two-year-old debut-maker My Alice (Limitless Bid) to an eye-catching, albeit hard to judge how good it really was, eleven-length  triumph in race 2 but the highlight was in the final race 11 when he guided two-year-old import Gakbyeolhan (Big Brown) to win by three lengths. 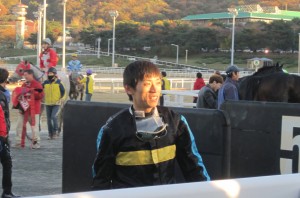 The juvenile Gakbyeolhan was beating seven older horses over a mile on what was just his third career start and looks quite a prospect.

Had there been a jockey challenge and had it been run under Hong Kong rules, Kurakane would have come out as the winner due to riding three 2nd place finishers as well – two of them behind Jo’s winners. Contrastingly Jo, aside from his winners, only got one other into the top three.

While the eight Busan riders in the capital will be riding in the big race on Sunday afternoon, both Jo Sung Gon and Ikuyasu Kurakane have a full book of rides on Busan’s short six-race card on Sunday. It would be very surprising if either failed to add to their weekend total.