Three Korean-trained horses are in Japan in preparation for the 3rd Interaction Cup, which will be held at Ohi Racecourse in Tokyo on Tuesday October 13. 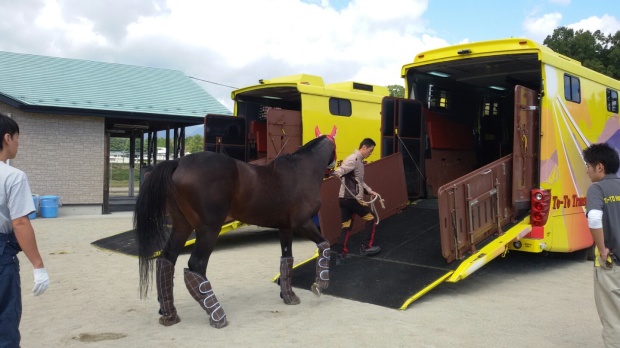 Two years ago, the late Watts Village delivered a glorious, not to mention totally unexpected, victory for Korea in the inaugural event. In 2014, a weak Korean entry flatly succumbed to a much stronger Japanese challenge. This year, there is a little more optimism in the air with the Korean visitors hopeful that the three challengers can this time at least give the home team a run for their money.

Cheon Gu, who seemed to enjoy his trip to Singapore in July and then finished 3rd in the Asia Challenge Cup on his return home heads the challenge of the visitors who spent six days at a quarantine facility in Nasu before moving to Ohi Racecourse on the Thursday prior to the race.

The race will be held under the lights next Tuesday evening and will be run over 1200M.

Cheon Gu (USA) [Old Fashioned – So Much Fun (Speightstown)] 3yo Colt (8/4/1/2)
Fast becoming the go-to horse for the international races with his sporting connections taking every opportunity to do something different this year. He led out of the gate in the KRA Trophy in Singapore only to tire in the home straight and then tried something similar in the Asia Challenge Cup at Seoul in August. That day only Choegang Schiller and El Padrino made it past him.

Cowboy Son (USA) [Cowboy Cal – Nosmallacheivement (Smart Strike)] 4yo colt (19/10/2/2)
As a 2-year-old in 2013 he won his first six races but the nature of Korean racing has meant that since becoming a class 1 horse, he has had very few opportunities to race at his preferred sprint distances. This race should therefore be ideal for him and he could be very interesting.

Dynamic Jilju (USA) [Forestry – Beat Your Feet (Dixieland Band)] 4yo colt(27/6/3/4)
He hasn’t run at 1200M since he was a 2-year-old (he won) but there is no reason why he won’t appreciate the opportunity for a sprint. He comes in following a class 1 victory over a mile in August and while he has never been a superstar, he is a solid campaigner.

We’ll have a full preview of the race once the final declarations are made over the weekend.