It didn’t take Pasquale Borelli long to make an impact at Busan. The Italian jockey had eight rides on his first day in the saddle in Korea and two of them came home as winners.

Things started well for Borelli as he guided 19/1 chance Garak Yeowang to a creditable 4th in race 2 before partnering Bart Rice’s King’s Rules to 3rd in race 3. The breakthrough would come in race 4 as Borelli produced Useung Choego, the longest shot on the board at exactly the right time to score victory in race 4

It wouldn’t be all plain sailing for Borelli. On a day when favourite after favourite got turned over in the Busan sand, Peter Wolsley’s well-fancied Daseot Me was a disappointment in race 7 although the pair did combine earlier for a useful 2nd place with Nuri Bulpae in race 5.

Borelli’s final mount of the day came in race 10 and it was another successful one with 2-year-old US import Soul Blade, also making his debut today, romping away to a 6-length victory.

Masa Tanaka was also on target with a double in what was a good day for the foreign jockey contingent at Busan. Borelli has three more rides at Busan this coming Sunday.

Juveniles take centre-stage this coming weekend with the Gwacheon Mayor’s Cup at Seoul on Saturday and the Gyeongnam Sinmun Cup at Busan on Sunday serving as the two-year-old Championship races for their respective tracks. Both are prep races for the Breeders’ Cup, which will be run at Seoul at the end of November, to decide the nation’s top juvenile. 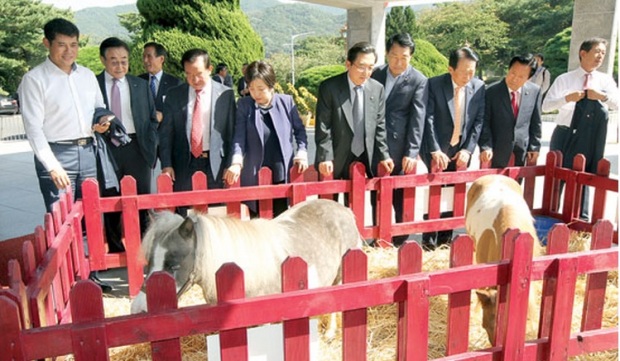 Look at the ponies! The big ammunition was rolled out for the National Assembly visit on Monday (Pic: Agrinet)

Off the track, some might say it has already been a week for juveniles with the annual National Assembly audit of the Korea Racing Authority taking place on Monday (as an offshoot of the Agriculture Ministry, the KRA receives a yearly inspection). As ever, it provided a mild dose of entertainment but little substance related to racing.

It’s a holiday weekend in Korea and with Busan Racecourse celebrating its 10th anniversary and Seoul Racecourse hosting a three day music festival after racing each day, there should be some big crowds in.

Italian jockey Pasquale Borelli makes his Busan debut on Friday. Across the weekend he has a total of 11 rides.