Cinderella Man will bid to extend his unbeaten streak to five while Gyeongbudaero will look to get back to winning ways when they face off alongside five others in what is set to be the race of the weekend in Korea at Busan on Sunday afternoon. 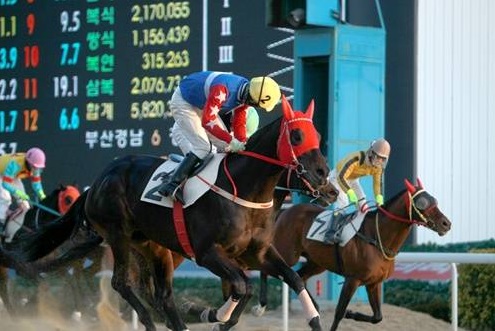 Gyeongbudaero looks to get back to winning ways on Sunday (Pic: KRA)

Only seven will run in the feature, which will be over 1800M but it is a star-studded line-up and it’s by no means certain either of those two will win.

Gumpo Sky, one of the top three-year-olds of last year will be there as will 2014 Busan Metropolitan Stakes winner Nobody Catch Me as well as prolific winners Spring Gnarly and Useung Radar.

The field is rounded out by Cinderella Man’s stablemate Ghost Whisper. The Pegasus Stables owned pair have been prepared for the first time by Bart Rice and it’s set to be a big weekend for the South African trainer.

In terms of quality, Seoul is once again overshadowed by Busan. The capital’s feature race of the weekend is also on Sunday afternoon with Heukgisa and Namhae Daewang among the better known names going.