Lots to catch up on…

Joe Fujii underwent surgery on his broken shoulder on Monday. Fujii fell heavily coming out of the gate in race 4 at Busan last Sunday, breaking his scapula. While he was originally hopeful of being back within 6 to 8 weeks, a visit to a Seoul specialist confirmed the need for an operation which is likely to keep him out for between 3 to 4 months. The Japanese rider hopes to be back in time for either the Busan Owners’ Cup or the President’s Cup at Seoul.

Speaking of falls, Park Tae Jong, is currently sidelined from a bad one suffered a month ago. “President” Park is currently on 1881 winners, by far the most of all time by a Korean jockey. However, he could be about to have company in the “Thousand Club” after Moon Se Young’s victory on Yeongsan II on Sunday took the 33-year-old to 987.

Three Korean horses arrived back from the United States last week and will go through a Seoul sales ring in a few days time. Gangnam Camp, Seoul Bullet and Better Than You have spent the past 17 months in Ocala training and, more recently racing. None of the three actually managed to win a race Stateside.

2013 Minister’s Cup winner Major King, who had been racing fruitlessly in the North-East US for the past few months, joined them on the flight home, however, last year’s Derby and Oaks winning filly Speedy First remains in the US.

Meanwhile, there is no end in sight to the long-running dispute over the relocation of the KRA’s off-site betting Plaza in Seoul’s Yongsan district. The new plaza finally opened amid tight security and vehement protest at the end of June and the dispute – originally started by the fact that the new Plaza is a block closer to a school than the old one – has now become something of a political football between governing and opposition parties.

Counter protests by Unions with interests in the racing industry have also taken place at the site with the most memorable banner being one imploring the other side to “Please Stop Insulting Racing Fans”, a reference to the ongoing campaign against the Plaza which has, among other things, sought to link the presence of Plazas with a rise in sex-crimes. 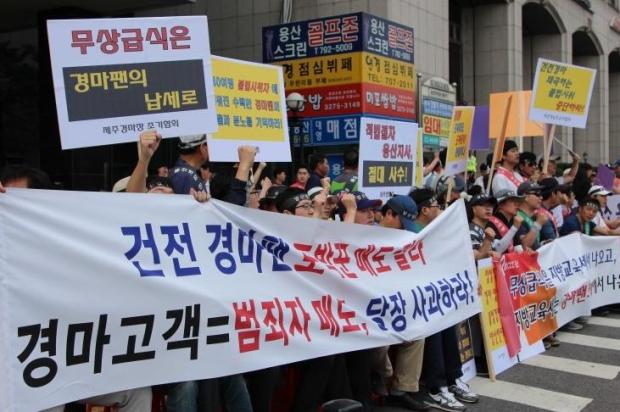 While the KRA has been busy producing glossy videos on the history of the Plazas and the community facilities they provide on non race-days, playing those videos at Seoul Racecourse seems somewhat like preaching to the converted. It’s certainly unlikely to change the minds of the anti-Plaza campaign which has raised a petition with 50,000 signatures calling for the Plaza’s closure.

Best to finish on news from the track and this coming Sunday sees the Busan Metropolitan City Mayor’s Stakes – colloquially known as the “Summer Grand Prix”. It’s been the lowest key build-up to the Metropolitan since Seoul horses became eligible to run a few years ago although the expected presence of the likes of Oreuse, Gamdonguibada, Cheonji Bulpae, Cowboy Son and Indian Blue among others, should make for an interesting race. We’ll start the full previews later this week.