Yeongsan made it five wins from five Korean starts, claiming the Munhwa Ilbo Cup in emphatic fashion at Seoul Racecourse on Sunday. 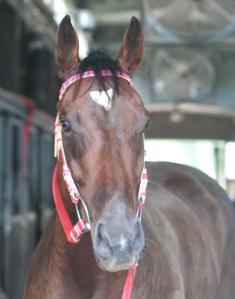 The gelding, who was sold to Malaysia as a 2-year-old, only to be re-imported at the end of last year, was sent off as the long odds-on favourite for the 7 furlong race.

Under champion jockey Moon Se Young for the first time, Yeongsan was taken to the lead early on and, with minimal promoting from his jockey, accelerated away from the field in the home straight to record one of the easiest Stakes race victories seen at Seoul for a long time. At least since Magic Dancer last month. Or Queen’s Blade the month before.

In the entirely separate race for second place, Sun Gear got the better of Clean Up Speed, a full 12-lengths behind the winner.

Yeongsan is yet to be tested in Korea. He didn’t especially impress on the turf in Malaysia where he scored one 2nd place from two total starts, but has taken to the Seoul sand exceptionally well and is, at least until this year’s 2-year-old crop start proving their worth, currently the most exciting horse on the peninsula.

Yeongsan II [Menifee – Foxxy Cleo (Peintre Celebre)] (he has to officially be named “II” due to a previous “Yeongsan”), has now won 5 races at distances between 1200 metres and 1700 metres all by wide margins and without facing any challenge. Still officially at class 2, at least for one more race, it may still be a while before we see what he is capable of.

It’s wise not to be carried away as we’ve been here before with the likes of Feel So Good and Fly Top Queen. While the latter has turn out to be a very good horse, she hasn’t been quite the international class race she looked early on.

Where Yeongsan goes next is the big question. In an ideal world, he would be taking on the visitors from Japan and Singapore in the SBS Asia Challenge Cup at the end of August over the same distance.