Tough Win may have lost his Grand Prix Stakes title to Gamdongubada last month but the six-year old showed he’s still the horse to beat at Seoul as he began 2013 with a routine win this afternoon. 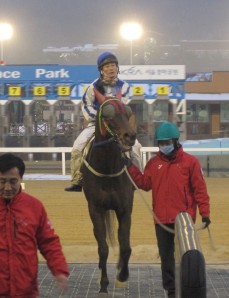 Sent off the overwhelming favourite and back at his favoured 1800 metres, Tough Win (Yonaguska) was never troubled as he coasted to a six-length victory.

60/1 outsider Imperial Girl (Imperialism) was the well-beaten second while Stakes winners Kkakjaengi (Put It Back) and Nolbu Manse (Simon Pure) trailed in fourth and fifth.

The victory was Tough Win’s 19th from his 26 starts and jockey Cho Kyoung Ho, who missed the mount in the Grand Prix due to suspension was clearly a very happy man as they crossed the line.

One race earlier, former champion filly & mare Top Point (Tom Cruiser) made her return to racing after a 6-month lay-off. And it was an encouraging performance as, while the race was won by 66/1 Brothers (Vicar) she finished a close third just a length back. Now 9-years old, Top Point still looks as though she has a season or more’s running in her.

Down at Busan, Geyongbudaero (Menifee) made his Open company debut. In the absence of the well-fancied Prince Kingdom, last year’s KRA Cup Mile winner was backed into favouritism, however, he ran slap-bang into an in-form Viva Ace (Macho Uno) who started quickly and made all to pull-off an 8-length romp.

Viva Ace has been one of the most consistent – and underbet – horses at Busan. Very rarely sent off as favourite, he has now amassed 11 wins from his 22 starts.

Also at Busan, there was success for the new combination of the track’s best Korean jockey Jo Sung Gon and only foreign trainer, Peter Wolsley. The pair combined to win the first of the co-feature races with Secret Whisper (Sea Of Secrets). The 5-year old mare has now won 8 of 19 starts.