A return to the winner’s circle for one of Korea’s most prolific horses meant another milestone in the career of the nation’s most prolific ever jockey as Park Tae Jong partnered Ace Galloper to victory at Seoul Race Park on Sunday afternoon. 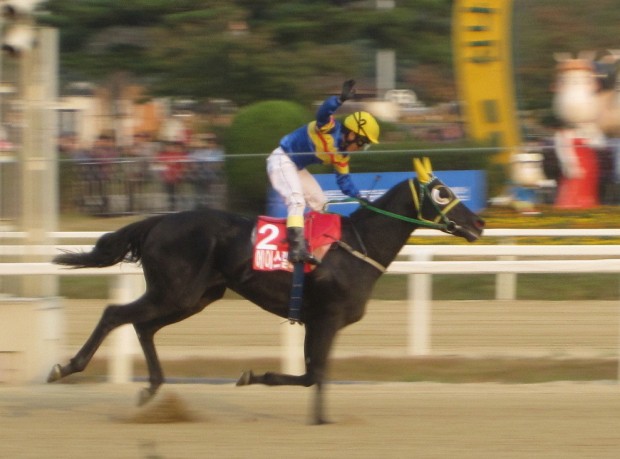 Ace Galloper (Chapel Royal) had been without a win since June of last year but had been coming back into form over the winter. The six-year old duly took advantage of a relatively weak class 1 field to cruise to a 7 length triumph and remind those present while he is still rated the top Korean-born competitor at the track. He now has 18 wins from 31 career starts.

The race marked the 4th win of the weekend for jockey Park Tae Jong and more significantly, the 1800th triumph of his long career. So dominant has Park been for so long that he has ridden over 1000 more winners than any other Korean jockey in history.

The 47-year-old debuted in 1987 at the old Ttukseom Racecourse. By any standard, 1800 is a considerable number of wins but his achievement becomes all the more remarkable given the fact that for the first 18 years of his career, he was – as per the rules at the time – restricted to just 5 rides each week.

Ace Galloper wasn’t the only horse getting back to winning ways after a long time drawing a blank. Lion Santa (Lion Heart) won his first 9 races at Busan in 2010 and 2011 but had only managed to add a single additional victory to that tally in an injury ravaged 14 months since. Yesterday, in the first of co-feature races, he was back to his old self.

Although only sent off as 4th favourite, Lion Santa stormed up the rail in the final furlong to comprehensively defeat a competitive class 1 field with Yeonseung Daero (Creek Cat) and up and coming star Wild Myeongun (D’Wildcat) a full 4 lengths behind. Lion Santa is now on 10 wins from 14 starts and goes straight back into consideration for big Stakes races later in the year.