There’s Stakes action at Seoul Race Park this Sunday in the shape of one of the longest running fixtures on the Korean racing calendar, the Sports Chosun Cup. 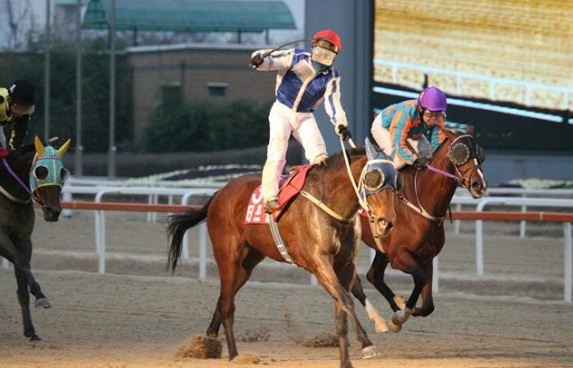 Tough Win takes the 2011 Grand Prix Stakes ahead of Mister Park (right). Both are in action this weekend (Pic: KRA)

However, while a competitive field will line up for the nine furlong race, plenty more attention will be focused on other races. Tough Win runs in the capital and Mister Park runs at Busan as the two top-rated horses on the peninsula continue their preparation to face each other and the young upstart, Smarty Moonhak once more.

Tough Win (Yonaguska) and Mister Park (Ecton Park), first and second in last year’s Grand Prix Stakes, are light-years better than the respectie fields they’ll be running against and for both of them, their biggest opponent is going to be the handicapper. Mister Park will carry 63kg at Busan (Sunday race 5, 15:45) – 8kg more than the next highest rated horse in his race while Tough Win will have to lug 64kg around Seoul – a whopping 10.5kg more than his nearest rival (Sunday race 9, 17:15).

As for the Sports Chosun, 13 class 2 horses will line up and it’s a tough one to call. Yacheonsaryeongbu (Vicar) has good claims as does Shoot In (Exploit), an also-ran on last year’s Classic trail. Seungniuihamseong (Vicar)was third in the HRI Trophy in March and if she runs to that form could also challenge as indeed could a number of others.