It has been announced that Chun Chang Ki, a multiple Classic winning jockey and a Stakes winning trainer, died on Wednesday May 2 at the age of 46. Chun had fought a long battle with cancer.

Chun Chang Ki turned professional in the Spring of 1987 at the old Seoul Racecourse at Ttukseom. Although a solid rider in the nineties, in was in the early 2000’s that Chun went on to establish himself as one of the top jockeys in Korea. In a five-year period between 2002 and 2007, he won every big race going.

Among 21 Stakes wins he won the Grand Prix once (Bohamian Butler in 2002), the Korean Derby once (Saebyeok Dongja in 2005) and the Ttukseom Cup three times (Bukcheon in 2003 and Star Wood in 2005 and 2006). However, it is his partnership with two of Korea’s most famous horses, that many racing fans will remember him for.

The grey half siblings Baekgwang and Baekpa are arguably the most popular Korean horses ever. In 2006, Chun guided the colt Baekgwang to victories in the Donga Ilbo Cup and the Minister’s Cup, the third leg of the Korean Triple Crown. A year later he rode half-sister Baekpa to the Sports Seoul Trophy and then, most famously, to the Korean Oaks. It was the jockey’s third triumph in the fillies’ classic.

In early 2008 Chun was first diagnosed with lung cancer. He fought the disease vigorously and while he had to give up his twenty-year jockey career, by 2009 he had recovered sufficiently to take up the trainer’s license that he had earlier qualified for. 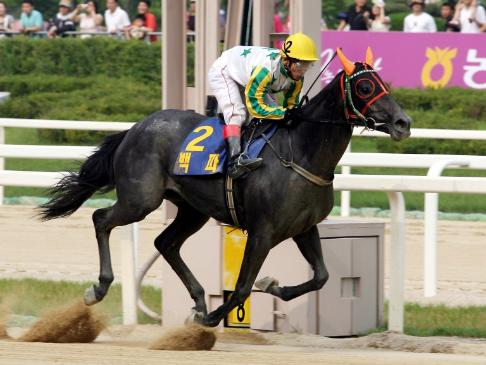 Chun’s second career showed every sign of being as successful as his first. Building up a barn of 22 horses, he had sent out 46 winners since saddling his first runner in 2009 with his greatest success coming in the 2011 Munhwa Ilbo Stakes with filly Legal Lady.

Another filly of his, Cheoneun, is a possible runner in the Korean Derby later this month and is likely a major contender for the Korean Oaks. Sadly, the cancer never let go and the widely respected Chun will not see if she can repeat Baekpa’s feat.

Chun Chang Ki is survived by his wife and two children.