Australian trainer Peter Wolsley earned his first Korean Stakes winner as his Khaosan [Sunday Well-Mogaung] won the Busan Owners’ Cup this afternoon. But it wasn’t straightforward as 2010 Derby winner Cheonnyeon Daero was first over the line before being demoted after a lengthy stewards’ inquiry.

Dangdae Bulpae was sent off as hot favourite to bounce back from his disappointment in the Metropolitan Stakes in July and it was he who set the early pace. Indeed, he was looking good to go on and record a comfortable win as the small field of seven entered the home straight. But then, all hell broke loose.

Dangdae Bulpae started to go backwards as Triple Sinwha took things up only to veer crazily wide towards the grandstand ruling himself out of contention for the win. That left Cheonnyeon Daero [Creek Cat-Doneitmyway], 2010 Derby winner in the lead. 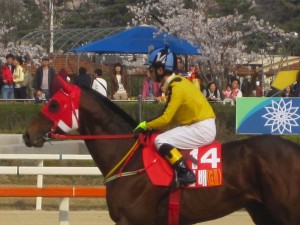 But he was not alone. Six year old gelding Khaosan was in pursuit and, under Australian jockey Nathan Stanley – on his first ever mount in Korea – he was in fighting mood. Back and forth they went and Cheonnyeon Daero, under Park Geum Man, seemed to get the advantage but Khaosan, a 16/1 outsider was right there with him.

They came together once and then twice, Cheonnyeon Daero seemed to be to blame but was in front as they crossed the line. A Stewards Inquiry ensued and, after a fifteen minute wait the result came back. The positions were reversed. Khaosan won the Owners’ Cup with Cheonnyeon Daero demoted to second. Triple Sinhwa, alone on the grandstand rail, claimed third.

The result meant a first ever Korean Stakes win for Peter Wolsley and a remarkable debut for Australian jockey Nathan Stanley who was standing in for Wolsley’s regular rider Kim Nam Sung. Khaosan, a six-year-old gelding, was winning for only the seventh time in thirty starts. For Cheonnyeon Daero, the reverse meant a twelfth second place finish in twenty-five races.

For Peter Wolsley, it is the crowning moment of his time in Busan so far. But it will be slightly bittersweet. Not only is it a win via disqualification but Cheonnyeon Daero’s jockey was Park Geum Man. Park is Wolsley’s protegé.

The young jockey ignored the xenophobia that is prevalent in Korean racing and sought out the Australian trainer as someone he could learn from and became his stable jockey for two years. Wolsley is on record as saying that Park’s win on Cheonnyeon Daero in last year’s Korean Derby – despite being for another trainer – is his proudest moment in Korea to date.

Wolsley will gain no pleasure in Cheonnyeon Daero’s disqualification. But Park is still surely destined for a glittering career and with Khaosan, Wolsley has deservedly joined him in being a Stakes and Group winner.

For Nathan Stanley it is a dream start. As Toshio Uchida’s replacement, the Australian had massive boots to fill and, unexpectedly filling in for Kim Nam Sung, he could not ahve done any better.

The overseas triumphs didn’t end there. Once the Owners’ Cup was over with, it was time for the Gold Circle Turf Club Trophy. And while the Peter Wolsley trained favourite Secret Whisper didn’t perform to expectations, Japanese jockey Akane Yamamoto guided 22/1 Cheonji Horyeong [Buster’s Daydream-Sorority Jazz] to a memorable victory. 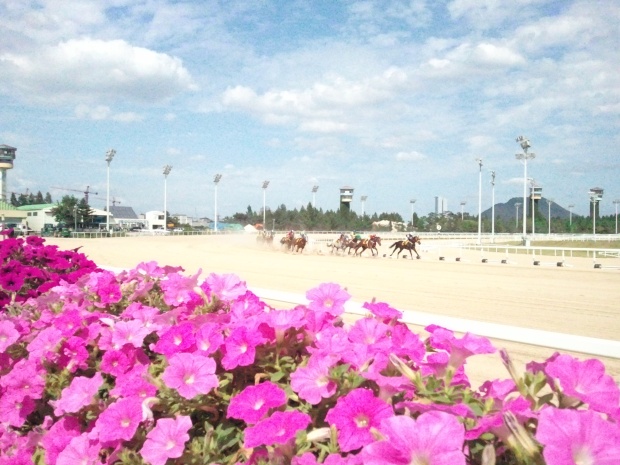