In the end we didn’t get our Zenyatta-esque Glory in victory and glory in defeat That was what we were expecting had Mister Park been able to put his fifteen race unbeaten record on the line back in July in the Busan Metropolitan against the very best on the peninsula. 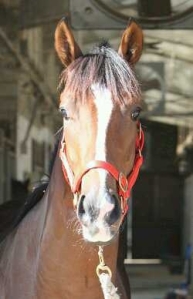 Instead, it was shortly after 6pm on this warm late summer Friday and in a regular handicap when, in his customary fashion, Mister Park steamrolled his way into the record books to win a record sixteenth consecutive victory.

Taking on foreign-bred horses for only the third time in his career allowed the four-year old gelding to carry less weight than he would have done against Korean born opposition and he led from gate to wire to score a five-length win.

With the win, he surpasses Po Gyeong Seon and Saegangja – iconic names in Korean racing – with whom he had been tied on fifteen since his last start in June. He is a special talent yet, due to circumstances and the way he has been campaigned, he does not get the kind of coverage others do. Having been born in Korea but sired outside (his sire, Ecton Park was later brought to Korea too) he was ineligible for the three-year old Classics and had to wait back in the barn while Dangdae Bulpae (Biwa Shinseiki) racked up five Stakes wins.

Mister Park only has the one Stakes victory, albeit the biggest of them all in the 2010 Grand Prix, and only faced foreign bred horses on one other occasion before today. His late withdrawal from the Busan Metropolitan led to claims from some – vehemently denied by connections – that they were happy to harvest relatively easy money by winning mismatches in contrast to the likes of Yeonseung Daero who has a much lower win rate than he should simply because he only ever runs against the very best.

None of this is Mister Park’s fault of course. He just beats whoever he’s asked to. And he’s beaten them all. Sixteen times in a row.

How many more can he win? There are potential threats. Lion Santa (Lion Heart) is a year younger and has won all eight of his starts so far. A US import, however, there is no guarantee that he will ever meet Mister Park. He will also quickly find himself carrying a lot of weight in handicaps – something Mister Park can escape by entering foreign-bred races. If they do, it would likely come in the Grand Prix at Seoul in December. IF he makes it there and goes onto win, Mister Park will undoubtedly belong among the great names of Korean racing.