May is traditionally a busy season for Korean buyers at overseas racehorse sales. This year, however, the nation’s equine shoppers have also returned home with additions to the peninsula’s breeding stock in the shape of established Australian sire Delago Brom and recently retired superstar Japanese racehorse Air Shady.

Delago Brom [Encosta De Lago – Brompton Cross (El Qahira)] only raced ten times but among his four wins was the 2003 Australian 2000 Guineas. An A$80,000 purchase at the Inglis Great Southern Bloodstock Sale in Melbourne, he’ll be standing on Jeju Island for the 2012 breeding season. Among the small number of Delago Brom’s progeny who are racing in Korea, the most successful is four-year old Dudeurim who has four wins from fourteen starts. Delago Brom is a very welcome Australian addition to the US dominated sire-ranks in Korea.

Aussie based owner and friend of the blog Ross Holburt, who owns Delago Brom three-year old Delago’s Lad who is being pointed towards the Australian Spring Classics later this year thinks Delago Brom is an ideal sire for Korea “they tend to be one paced but tough…I think the sand will suit them down to the ground.”

His early racing years were blighted by injury and it was not until he was seven years old that he won his first Group race but, with his six-year career, Air Shady became one of the most popular racehorses in Japan in recent times. It will be fascinating to see what kind of mares get sent to Air Shady and whether he can repeat the success of fellow Japanese sire Meisei Opera who, despite being totally unheralded, sired this year’s KRA Cup Mile winner Soseuldaemun.

While Delago Brom and Air Shady are, along with Officer, the highest profile recent additions to the stallion ranks, a number of racehorses have been retired to stud so far this year. New Korean bred sires are Nice Choice (Lost Mountain), Money Car (Newsprint) Secret Weapon (Native Regent) and Rainmaker (Revere). Secret Weapon is potentially the first second generation Korean stallion. Foreign bred horses retired from the track to stud are Angle Slam (Gold Case), Angus Empire (Lion Cavern) and Florida Native (Kissin Kris). Additionally, Colors Flying (A.P. Indy) and Limitless Bid (Sunday Silence) have been imported from the US and Japan respectively.

* Picture of Delago Brom is by Ross Holburt of the inimitable Slickpix while that of Air Shady is by Ishida Kazushi of the HimawariKazushi racing blog.

Just when it looked like it couldn’t get any more depressing, the K-League “Match-Fixing” saga did just that today as a second footballer linked to the fixing of professional football matches in Korea was found dead at a hotel in Seoul. Jung Jong Kwan of K3 side Seoul United, and formerly of K-Leauge outfit Jeonbuk Motors, wrote in an apparent suicide note that he was a broker involved in the fixing of matches. 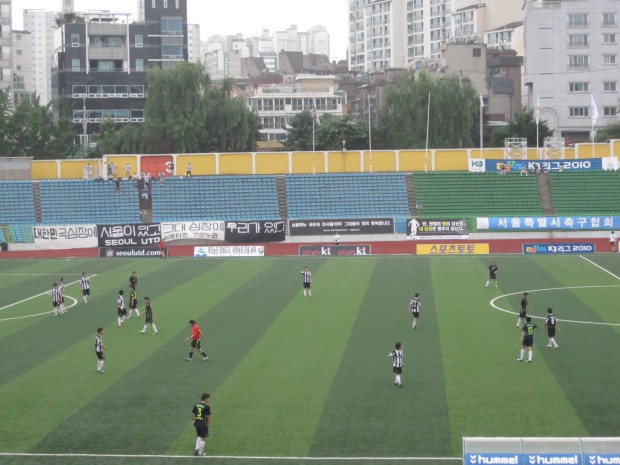 So far, five players have been arrested and the affair is also thought to have led to another player, Incheon United goalkeeper Yoon Gi Won, taking his own life earlier this month (although Yoon’s death is yet to be formally linked to match-fixing). No mater how it plays out, it is clear that for all aficionados of Korean professional Sport and especially those who enjoy the occasional (legal) punt, things are not going to be the same for a very long time.

Betting on football matches in Korea is legal through a quasi-governmental organisation called Sports Toto but it is far from clear as to whether the fixing – which has been confirmed to include a match between Daejeon Citizen and Pohang Steelers in the League Cup (equivalent to the English Carling Cup) earlier this season – involved was designed to benefit bets wagered on correct score betting on the Toto or on illegal markets. See this thread on the Rokfootball.com forum for an excellent summary of the situation and hypothesis on how the fix may have happened.

The K-League has two types of clubs. The first type are the corporate-owned ones; FC Seoul (LG/GS), Suwon Bluewings (Samsung), Jeonbuk Motors, Ulsan Tigers & Busan I’ Park (all various incarnations of Hyundai), Jeju United (SK) and Pohang Steelers (POSCO). Also included in this group is Seongnam Ilhwa, owned by the Unification Church of Reverend Moon Sun Myung (better known as “The Moonies”). The others are “Citizen” teams, without a large backer. Without the financial clout of their rivals they are unable to offer big salaries and usually make up the also-rans in the K-League championship. All players implicated so far have been members of Citizen clubs. Just as in racing in Korea, the gangs know who to target.

Worse still there are rumours that K-League clubs knew exactly what was going on but opted to quietly terminate the contracts of players they knew to be involved in accepting bribes. If true, this is potentially devastating both for the K-League and for legal betting in Korea. The National Gaming Control Commission do not miss a trick in their war on legal gambling. The K-League has asked Sports Toto to remove its matches from its products, at least for the forseeable future. This is dangerous. Once this happens, organised crime will once more hold the monopoly over football betting in Korea, just as they do over off-track horse racing betting in many parts of the country since the enforced closure of the KRA’s “K-Netz” internet and telephone betting service.

Two men are dead and others are languishing behind bars. It’s both a human and a sporting tragedy. But it is not the fault of Sports Toto. As long as competition occurs, there will be those who will find a way to bet on it. Making the legal means to do so as attractive as possible is to everyone’s benefit.