Yodongjewang led home a trifecta of outsiders to win the Sports Chosun Cup at Seoul Race Park this afternoon. In what is traditionally one of the biggest betting races of the year, the 12/1 shot held off Tamnaseontaek to take a half-length win and give rising star jockey Jo In Kwen his first ever Stakes win. 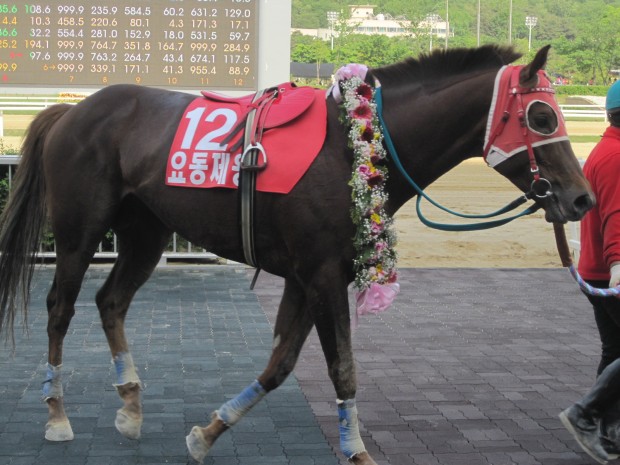 Punters eventually sent four-year old colt The Almighty off as slight favourite and he showed at the front early along with outsider Jangbi Sarang and the well-fancied Namchonuichukje. All of these fell away in the home stretch of the nine furlong race though as Jo Kwen took Yodongjewang, who was always handily placed into the lead and outsprinted Tamnaseontaek and the fast finishing Yeongtap to claim the victory.

A stewards’ inquiry didn’t change the placings of the first three and Yodongjewang scored just his fourth win of a twelve race career to date.

For jockey Jo In Kwen, it was a first ever Stakes victory. Just two weeks ago the 24-year-old reached the milestone of 100 career winners and today confirmed his place as the hottest young riding property at Seoul. If the rumours of Busan’s Jo Sung Gon heading north to the capital prove true, there is going to be a lot of young talent in the weighing room.

Some punters also went home happy; the trio (picking the first three horses in any order) in the Sports Chosun paid 2134/1.

The long shots weren’t done there. In the feature handicap an hour after the Sports Chosun, 74/1 Out And About (Outflanker) scored a very unlikely victory over Captain Cugat and odds-on favourite Baekjeonmupae. It was five-year old Out And About’s first attempt at class 1 and he was given a great ride by Park Byeong Yun who was a late replacement for Moon Se Young who was unfortunately injured during racing yesterday.

They're sweet but very annoying: "Wink" paid their first visit of the year to Gwacheon

Down at Busan, the feature race went the way of Mulbora, who scored an impressive win over KO Punch and last year’s Champion Juvenile Bulkkot Gisang. 2008 Derby winner Ebony Storm was fourth in the event which was run over a mile.

Ebony Storm, the longest shot on the board when he won his Derby in a monsoon downpour at Seoul three years ago never really followed up on that success. Indeed, so disappointing was he that he managed to get himself gelded. SInce then, he has re-emerged as a useful sprinter and consistently picks up money finishes. As for Mulbora, it was a second consecutive victory and his eighth in total.

So concludes another weekend of racing on the peninsula. It was a glorious day today but next week it’s forecast to get hot. Very hot.