Nicola Pinna may not be racking up huge numbers of rides or winners but he is certainly getting the job done on the right horses The Italian jockey ride his third Class 1 winner on Sunday as he guided 17/1 chance Gumanseok to a narrow victory in Seoul’s feature race.

In addition to a pair of class 1 victories on Bichui Jeongsang, Pinna had also won a major Juvenile race on OS Hwadap. Gumanseok (Vicar) had shot back into form with a surprise win under Djordje Perovic a month ago and carrying plenty more weight today, punters once again allowed him to go off reasonably unfancied.

Under a strong ride from Pinna, however, Gumanseok got the best of a tight finish, seeing off Double Shining by a neck on the line. It was Gumaseok’s 1th win of a 41-race career that included success in the Sports Chosun Cup back in 2013. It took Pinna on to 6 wins in career.

At Busan, 2015 Korean Derby winner Yeongcheon Ace was denied once more in Friday’s feature. Sent off the odds-on favourite, the four-year-old just couldn’t get up as outsider Useung Chance, took her chance fully under Makoto Okabe to record an unlikely victory. It’s now been five races since the Derby without a win for Yeongcheon Ace.

Sunday’s feature on the south coast saw a return to the track following five months out for Macheon Bolt (Old Fashioned). And the Peter Wolsley trainee returned in style, cruising through the rain to score a five-length win over a mile. It was the four-year-old’s seventh win from ten starts.

Racing returns to Korea on Friday but before that, attention turns to Meydan in Dubai where, should he get into the race, Success Story is set to make his Dubai World Cup Carnival on Thursday. He has been entered in the 1600M race 1 on the dirt.

Cheongu made his debut on January 8th over 1200M and did ok, finishing 5th  of 8, despite getting a bad start and losing a plate. Racing over a mile, it will be more difficult for Success Story, but if he is right, he can be competitive. As for Cheongu, he may go again next week.

Italian jockey Nicola Pinna landed his biggest Korean winner to date as he guided home the unbeaten OS Hwadap in a Juvenile Special race on Sunday afternoon at Seoul Racecourse.

The race was one of a pair of valuable races for juveniles who had already passed their training test before entering the racecourse for the first time. An equivalent race on Saturday restricted to Korean bred horses was won by Clean Up King (Strike Again) but the main interest was in Sunday’s event which was open to the imports.

Three came in undefeated, including OS Hwadap but it was Miso Wangja, under Djordje Perovic, already a winner at the race distance of 1400M who was sent off as the favourite. He jumped a little wide whereas under Pinna, OS Hwadap was quickly into a lead that he never looked like giving up, running on to win by almost three lengths on the line and take his 100% record to four races.

Perovic himself didn’t exactly have a bad end to the year, riding four winners on a rare Friday afternoon card in the capital.

Also of interest on Sunday was New White Socks, who had seemed almost unbeatable at distances up to 1700M but had been beaten in four previous tries at 1800M. On Sunday, he was stepped up to 2000M and while punters didn’t keep faith, sending him off at close to 7/1, connections evidently knew what they were doing and New White Socks this time stayed on to grind out a half-length victory.

New White Socks will be one to watch as a four-year-old and OS Hwadap one to watch as a three-year-old. However, that’s it for Seoul Racecourse in 2015 with Busan set to close out the year in Korean racing with cards this Friday, Saturday and Sunday.

It hadn’t been the easiest of starts to riding in Korea for Nicola Pinna but things came right for the Italian jockey at Seoul Racecourse on Saturday as he rode a double, including victory in the feature race on Bichui Jeongsang who downed Asia Challenge Cup winner Choegang Schiller in a tight finish. 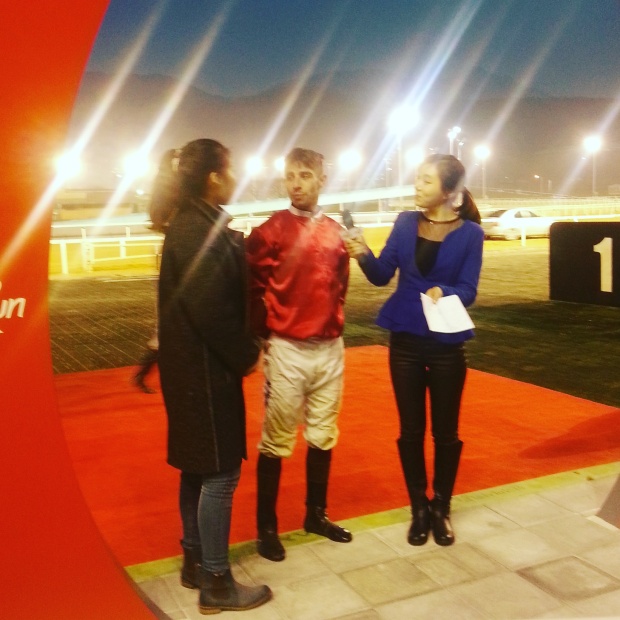 Pinna couldn’t make weight on the first of his scheduled mounts a few weeks ago and was handed an automatic two-day ban for his troubles. It meant that despite having been in the country a month, prior to today, he had only had three rides.

Today it came right though. Pinna made his breakthrough on 3/1 second favourite Hwangnyongbisang, who scored a two-length victory in race 8. However, by far the best was yet to come.

Choegang Schiller (Artie Schiller) beat Singapore’s El Padrino to win the Asia Challenge Cup in a track record time at the end of August. The three-year-old hadn’t run since then and was sent-off the hot favourite to repeat today with regular jockey Lee Chan Ho riding. Third-favourite was Bichui Jeongsang (Wildcat Heir), a four-year-old filly, who had won five of fifteen career starts and was 3rd to Esmeraldina in the Ttukseom Cup.

With Pinna in the saddle, Bichui Jeongsang wasn’t quickly away but improved around the home turn to come shoulder to shoulder with Choegang Schiller entering the home straight. That would be how they would remain for a keenly-fought tussle through the final two furlongs that went all the way to the line. It looked at one point as Choegang Schiller had it but Pinna coaxed out one last effort from his mount to get her home a neck in front.

Punters second-choice Bear Queen Trophy was a distant third but may as well have been running a different race, so dominant the first two were. The winning time was just one-tenth of a second outside the mark that Choegang Schiller set in the Asia Challenge Cup. The win could be a boost for Bichui Jeongsang’s connections ambition to race her overseas early next year.

A day can make a big difference and all of a sudden, 27-year-old Pinna now has two wins from just seven mounts and really showed his quality in that second win. He has five more rides tomorrow. Fellow Italian-licensed rider Djordje Perovic meanwhile guided home his 38th Korean winner earlier in the day and is now joint-leading jockey at Seoul for the month of November. While Perovic can do a kilo lighter, more rides like the one on Bichui Jeongsang and Nicola Pinna could well be challenging him in the near future.