Over the weekend, Sho Ueno became the latest Japanese jockey to debut at Seoul Race Park, replacing Mai Beppu who left the track at the end of February. He has a tough task ahead of him. 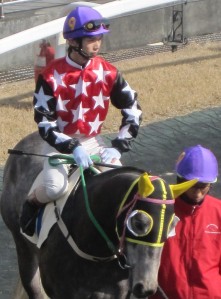 Nevertheless, the young JRA rider made an encouraging start. With just four rides across the weekend, all unfancied, he ended up with two third-place finishes and another fifth with only one being out of the prize-money.

The foreign jockeys are now the only ones who are considered “freelance”. All others are attached to trainers.

Under the jurisdiction of the Jockey Union, it used to be the case that jockeys who were retained by a trainer could only take five race rides per week but would get a salary for trackwork. Freelancers could ride as many as they wanted but would have no guaranteed salary.

The best jockeys went freelance and on average, earned three to four times that of retained jockeys. The very top ones even more.

Now all jockeys are retained by a trainer with a limit for everyone of 14 rides over a weekend. Of course, the best jockeys still get all the best rides – Moon Se Young is with Ha Jae Heung and Ch Kyoung Ho back with his old boss Shin Woo Chul.

The new system makes is, however, likely making it even harder for the foreign jockeys to get rides. When each trainer has two or three jockeys retained, they need a very good reason to employ someone else. Not a problem for Moon Se Young who gets plenty from many trainers, but not so easy for the foreigners.

And the figures don’t lie. Makoto Noda has won 8 times since arriving last June while Toshi Inoue has just 1 victory to show from his three months so far – and that was on his first day. They are poor returns but both, just like Beppu and Hiro Hamada before them, seem more than capable in the saddle but only get opportunitites to ride horses in contention for the minor placings at best.

On the surface, the success last year of Nathan Stanley and Akane Yamamoto at Busan would appear to undermine this theory. In reality, however, while both were officially the only freelancers at the track, in reality the pair acted as stable jockeys to Peter Wolsley and Kim Young Kwan in all but name. It’s unlikely a visitor to Seoul will get similar opportunities any time soon.

With Cho Kyoung Ho sidelined since January, Moon Se Young has dominated the early part of the Seoul season. The breakthrough of the year is Seo Seung Un, still a first year apprentice but fourth in the standings:

Mai Beppu’s time riding in Korea has come to an end. The Japanese jockey has held a license at Seoul Race Park for a full year but will return to Japan at the end of February. She will be replaced by young JRA jockey Sho Ueno. 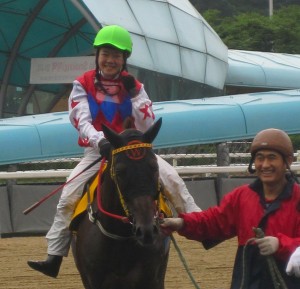 Beppu first rode in Korea in the “International Lady Jockey Invitational” – an event that mercifully for all sorts of reasons hasn’t been repeated – in Busan in 2009, finishing third in the race behind fellow Japanese Hitomi Miyashita who herself went on to spend a successful year riding full-time at Busan.

Beppu arrived in Seoul last March and, after getting injured on her first weekend went on to have a reasonably successful time at the track – at least by the usual standards of the thankless task that is being a foreign jockey riding at Seoul. She ended with 13 wins over the year, with a quinella strike rate of 9%. Like all other foreign jockeys at Seoul, while she did get plenty of rides (around 300 in total), their quality was lacking.

Always smiling, the 24 year-old Mai was popular with punters, trainers and other jockeys (some more than others) and will, with any luck, continue to have a successful career in future.

Mai’s replacement at Seoul is 26 year-old Sho Ueno. Based at tthe JRA’s Ritto Training Centre, Ueno debuted in 2004 but has only managed 38 winners from 1,236 rides in Japan. He joins Makoto Noda, who is coming to the end of his license and Toshihiko Inoue as the only foreign riders at Seoul.

Akane Yamamoto is currently the only foreign jockey at Busan although the suspended Nathan Stanley is still licensed. Sho Ueno is on an initial 4 month license starting March 1.

December is a month when punters expect to see Dongbanui Gangja [Broken Vow-Maremaid (Storm Bird)] in the winner’s circle. In 2009, he became the third horse – after 1980’s and 1990’s greats Po Gyeong Seon and Ka Shock Do – to win consecutive Grand Prix Stakes, Korea’s most prestigious race. This year, he wasn’t nominated and instead came to Seoul Race Park this weekend and comfortably dismissed a class 1 field by three lengths despite giving the whole lot of them a minimum of six kilos. 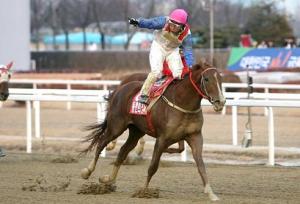 Just one week before his first Grand Prix triumph on the weekend before Christmas in 2008, Dongbanui Gangja’s dam, a then fourteen-year-old mare named Maremaid [Storm Bird-Isayso (Valid Appeal)] arrived in Korea having been bought by the Korea Horse Land breeding operation.

Dongbanui Gangja himself was a $20,000 purchase from the OBS Spring Two-year olds in Training sale at Ocala in 2007. He quickly established himself as a high-class performer and went unbeaten for twelve consecutive races between October 2008 and July 2010, during which time he won hs two Grand Prix’s and an Owners’ Trophy.

The rest of 2010 was a disappointment though. As a five-year old he had become increasingly difficult to control and he started to drift very wide in his races. There was talk of retirement. However, with a lot of training and a pair of pacifiers fitted, this year he has begun to show a little of his old form. It is great to have him back.

Apart from Dongbanui Gangja, Maremaid had produced six other foals who raced in the US. The best of them was a filly, Glitter Maid, by Glitterman, who won six of twenty-eight starts in the early 2000’s. When she arrived in Korea, she was heavily in foal to Montbrook. Sadly, she suffered complications while giving birth to a filly on February 12, 2009.

The filly survived, however, and this afternoon at Busan Race Park, Dongteuja [Montbrook-Maremaid (Storm Bird)] maintained her 100% record as she strolled to her fourth consecutive win since her debut in August. She has a long way to go before emulating her big brother but so far, she’s doing just fine.

Dongteuja was today ridden by Japanese jockey Akane Yamamoto. Akane went on to finish second by a head in the feature race on Goni (Wando) to hot favourite Champion Belt (Exploit). Champion Belt should have been ridden by Nathan Stanley, however, calamity struck for the prolific Australian rider on Friday as he picked up a three-month ban – an unusually strong punishment for in-race incidents in Korea that don’t involve non-trying – for his ride on Cheonjae Bogo in race 6 on Friday.

The suspension, which potentially ends Stanley’s time in Korea given his license expires at the end of December, means he will miss next week’s Grand Prix Stakes at Seoul. Akane will be there though riding Mister Park, last year’s winner as he attempts to emulate none other than Dongbanui Gangja and retain the biggest prize in Korean racing.

We’re just a week away from the Grand Prix, the climax of the Korean racing season, but there’s still 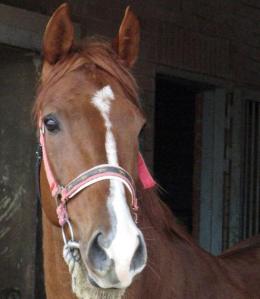 plenty going on across the peninsula this weekend.

Seoul has class 1 handicap headlining on both Saturday and Sunday. Double Grand Prix winner Dongbanui Gangja (Broken Vow) misses this year’s event but he’ll be in action in Saturday’s feature. While there are a number of decent, if less than intimidating, horses up against him, the thing that is most likely to stop the former Champion adding to his eighteen career victories is the weight – he’ll be carrying six kilos more than any other horse in the race. Sunday sees three-year old filly Grand First (Salt Lake) making her first appearance at the highest level as she takes on a beatable looking field in the feature race.

Down at Busan, US five-year old Purely Spontaneus (Pure Precision) makes just his third atrt of 2011 in the feature – he’s one of twelve rides for Akane Yamamoto over the weekend as she looks to build on her five wins a week ago. The now nine-year old Golding (Gold Alert) is one of just seven rivals.

However, Busan’s most intriguing contest of the weekend is on Sunday afternoon. Aussie jockey Nathan Stanley gets the nod to ride Champion Belt (Exploit) who many predict will go on to be the stand-out horse of his year-group (which so far has been pretty shoddy) in the feature race. To get on the favourite, however, Stanley has had to get off Khaosan (Sunday Well) on who he won the Busan Owners’ Stakes and finished fourth in the President’s Cup. In his absence, trainer Peter Wolsley has managed to secure the services of champion jockey Jo Sung Gon to ride the tough as nails Khaosan. Neither rider will be in a good mood if they lose this one. 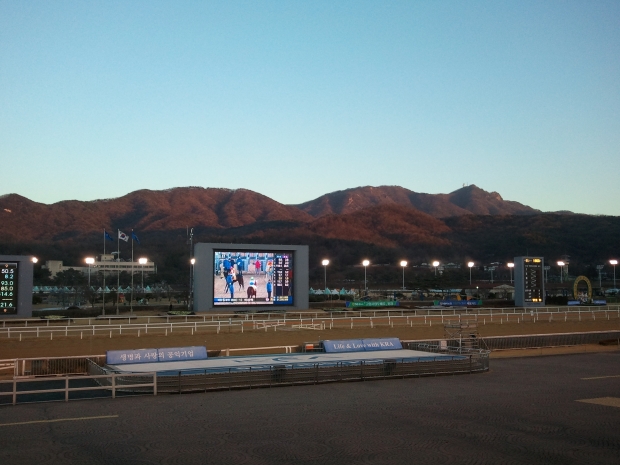 December can be cold but beautiful at Seoul Race Park