Luigi Riccardi landed his biggest winner to date as a trainer in Korea as Choegang Black denied hot favourite Raon Pink to win the Korea Oaks at Busan Racecourse on Sunday afternoon.

Choegang Black was sent off as a 70/1 outsider for the filly Classic having skipped the Luna Stakes prep race and having only won up to class 5 level in Seoul. The Oaks has a habit of producing an unexpected winner though and when Raon Pink was a little awkwardly away after a start that had been delayed following the reluctance of Queens Tour to load, it was clear that the race was anyone’s.

Pureun Jangmi showed the way early with Luna runner-up Jedi for company along with Miss Indie and 2nd-favourite Doctor Fappiano. Antonio Da Silva meanwhile, kept Choegang Black just behind the leading group throughout the early and middle stages of the 1800M race.

At the top of the stretch Raon Pink, under Park Tae Jong, loomed large and one-by-one the challengers fell away. All except Choegang Black that is, who to the inside of the favourite struck the front with a furlong and a half remaining and ran on superbly to win by just over a length on the line.

Raon Pink was 2nd while Serve Ace and Alan Munro came from last to 3rd in the space of the home straight. Queens Tour was 4th and Eodigana 5th as Seoul fillies swept the top-five placings

For Luigi Riccardi, who has been licensed in Korea since the end of 2017, it was by far his biggest local win. For jockey Antonio Da Silva, it was a third Group winner in Korea following success on Dolkong in the 2019 KRA Cup Classic, and Munhak Chief in the Grand Prix the same year.

Choegang Black is by Purge and is out of Allwise (by Mr. Greeley). She was bred by Nokwon Farm and is owned by Lee Kang-woon.

It hasn’t taken Luigi Riccardi very long to get among the winners in Korean racing. On Sunday afternoon, Rocket Queen won the 1700M race 7 giving the Italian trainer his first Seoul success with just his second runner. 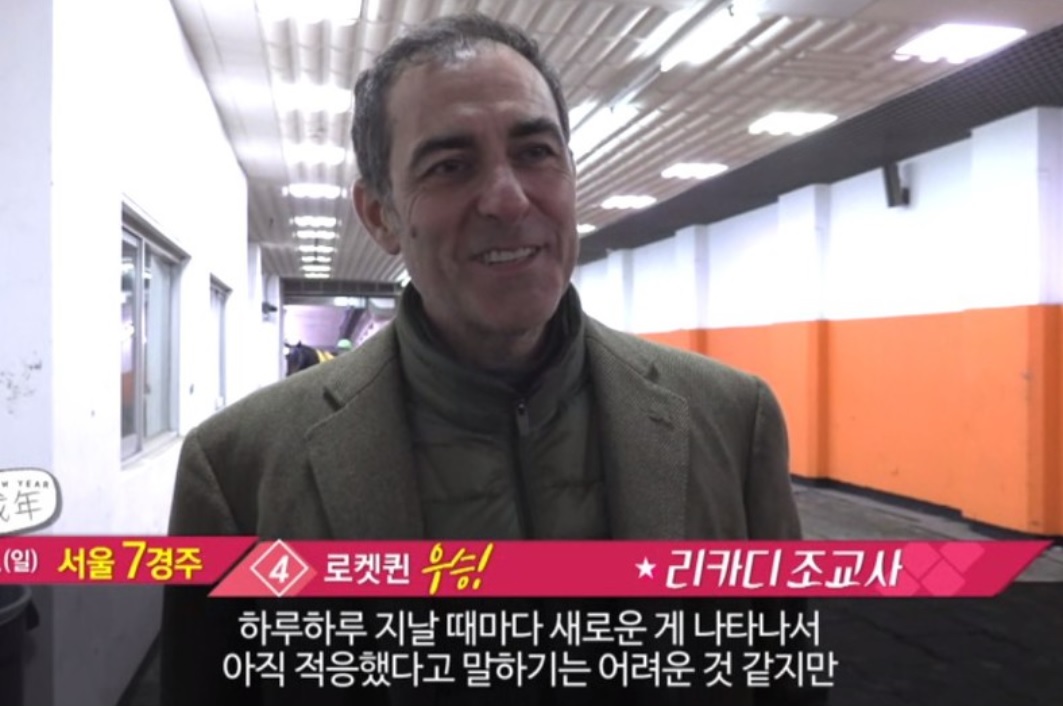 Rocket Queen actually has a history with foreign trainers having previously being with Brian Dean and giving the Australian trainer his final Korean winner last June. She’s one of 17-horses in Riccardi’s fledgling Seoul barn and on Sunday was sent off as 2nd favourite for the Class 3 handicap. And under jockey Jeong Jeong Hee, Rocket Queen made all for very comfortable four-length score.

Riccardi came close to adding another later one race later with his only other runner of the weekend, Choego Money having to settle for 2nd in race 8.

The 49-year-old Riccardi arrived in Seoul last autumn having previously trained extensively in Europe and held assistant trainer positions in the United States. He and Australian Simon Foster became the 2nd and 3rd foreign trainers to be based at Seoul following Brian Dean who spent a year here between 2016 and 2017.  Foster too has sent out a total of three runners so far and is in the process of building up his stable.

There are a couple of new foreign trainers in town and one of them, Luigo Riccardi, saddles his first runner at Seoul on Saturday afternoon. There are 11 Saturday races in the Korean capital from 10:45 to 18:00.

The 49-year-old Italian trainer Riccardi sends out Choego Money in race 10 and the gelding looks to have an excellent chance under Djordje Perovic. Here are the previews:

(8) PRIMO already has a 2nd place to her name and comes in off the back of a reasonable enough 5th place in what looks to have been a tougher contest than this last time and she has as good a chance as any here, likely from the front. (1) NONGBON DAERO has improved across three starts so far and has cope for more today while (6) IRYEO HAYEO, beaten by Primo on debut doesn’t look completely devoid of talent either. There are three debut-makers, two of whom will be backed. Moon Se Young riding means inevitable support for (2) SPEED HWANGNYONG but (9) NEUL SACHAN looks more convincing having comfortably won a trial last month.

Small field of maiden juveniles here but most have already shown a bit of potential. (3) EAST KINGDOM and (6) THE FINAL both came home in 3rd place on their respective debuts. Neither was well-backed but both showed enough to suggest they can push on here. It’s also fair to say that neither were particular quick so we’re going with (2) FLYING HERA, 5th on debut at this distance on November 4th to score here. She showed a strong finish that day and can come from just behind the early leaders. (7) SOU WARRIOR and (8) CHAPEL ACE not to be discounted either.

Fillies only here and (9) EAST GULCH will be a strong favourite. She’s been 2nd in both her outings to date, beating three of these last time and really should be leading this one gate to wire. (3) CHEON YANG is a capable type who could give the favourite some problems although as a closer, the distance may not be the best. (1) BEST YEJI steps back in trip and can go better today while (10) PERFECT BIC C landed back to back wins over END_OF_DOCUMENT_TOKEN_TO_BE_REPLACED