Saturday saw day 1 of the Korea Cup meeting and there were several Trophy Exchange races throughout the day: 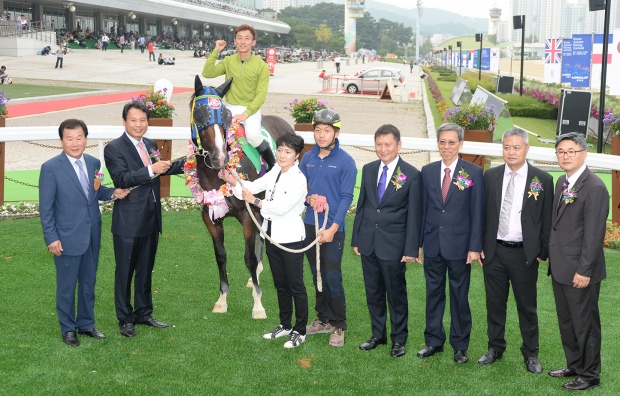 Trainer Lee Shin Young sent out the winners of both the Singapore Turf Club Trophy and the Hong Kong Jockey Club Trophy. Raon Amos took the STC while Gray Socks was the winner of a messy event for 2-year-olds in the HKJC. 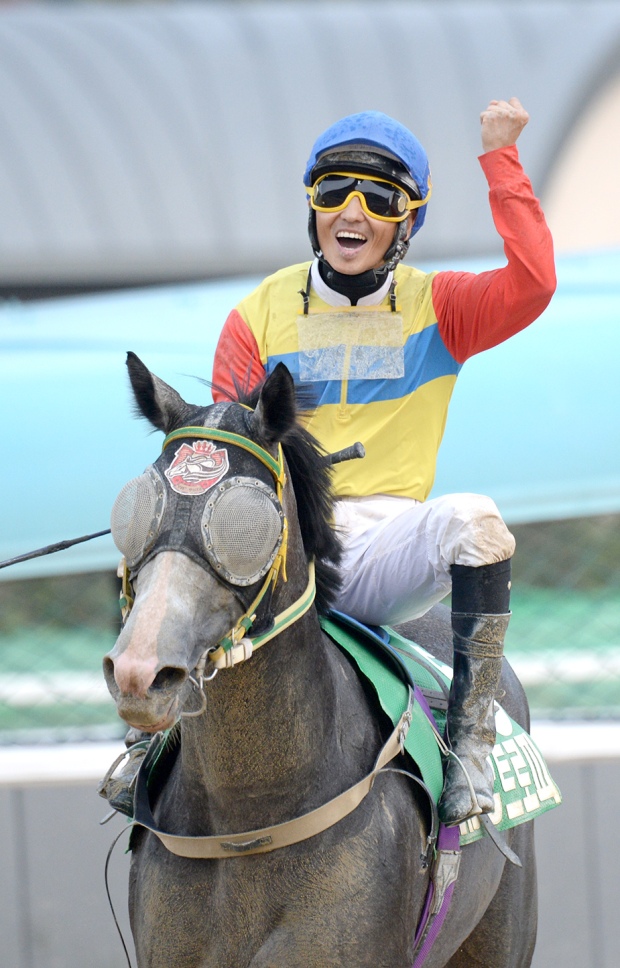 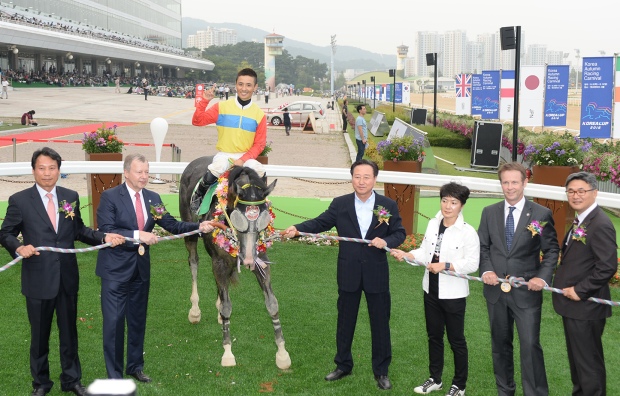 Moon Se Young also won a race in a mini-jockey challenge that was held involving some of the  jockeys who will ride in Sunday’s Korea Cup & Sprint. Abderahim Faddoul, representing France was the best visitors although he has to wear the British silk after the French one went missing: 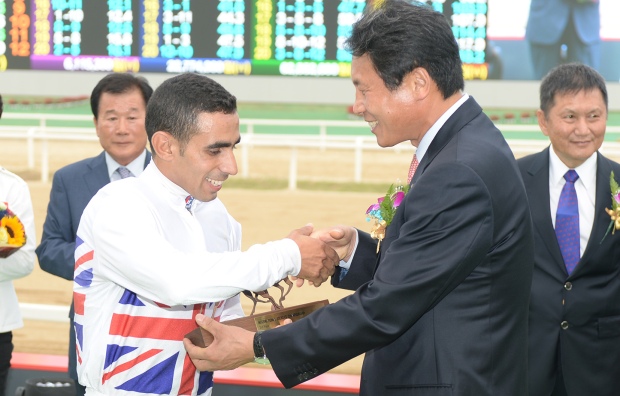 Earlier the Macau Jockey Club Trophy had been won by Ham Wan Sik on Dixie Ploit while later on, the Horse Racing Ireland Trophy ended with an easy win for Kim Hye Sun on Cheonji Storm:

No International jockey Challenge this year – we’ll have 6 visiting jockeys in town for the Asia Challenge Cup later this month – but the annual international exchange races went ahead at Seoul Racecourse this past weekend. 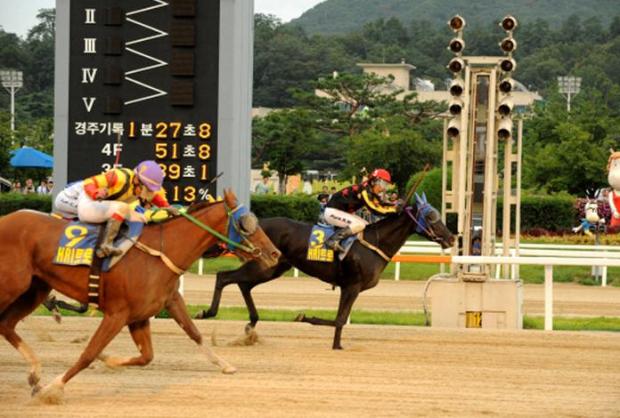 Four exchange races were held on Saturday(the Singapore Turf Club Trophy will this year be run on August 30, the day before the Challenge Cup) while the YTN Cup, traditionally the finale of the Jockey Challenge took place on Sunday.

Next came the Horse Racing Ireland Trophy which saw odds-on favourite Sun Gear beaten into fourth place in a tight finish where 7/1 shot Pinot Noir (Capital Spending) just got the better of Revereduction (Revere) right on the line.

On a blustery day where national flags were hoisted and lowered over the racecourse at a speed greater than that of some of the runners, the VIP balcony groaned under the strain of a procession of visiting dignitaries that included the Ambassadors of Turkey and Ireland.

With the winner of Horse Racing Ireland trophy @korearacing Great day out! pic.twitter.com/ixrTfZHDYk

One race later, Choi Bum Hyun made his 2nd visit of the day to the Presentation stage after guiding Ganghae (Didyme) to victory in the Selangor Turf Club Trophy. Ganghae’s victory came at the expense of the much vaunted Raon Morris who despite being sent off at long odds-on following a very easy win last time out, faded in the home straight as Ganghae came past to record his 4th win from 13 starts.

The feature race of the day, however, was the Turkey Jockey Club Trophy, the only class 1 event on the program. And in what was a very open betting race, 50/1 outsider Seoul Jeongsang (Capital Spending) swooped late to claim a narrow victory, giving jockey Lim Gi Won his biggest race win to date. It was also the biggest win in 6-year-old Seoul Jeongsang’s career, and only his 5th from 36 starts.

Stakes action returned to Seoul on Sunday in the shape of the YTN Cup, one of very few televised live races in Korea (by virtue of it being sponsored by the YTN Cable News Channel).

Run under the floodlights and in a torrential downpour, 5-year-old American-bred mare Big Power (A.P.Warrior) beat out Dragon Hill and Strong Wind to win by a length under Ham Wan Sik.

Riding the third horse home was Moon Se Young. The champion jockey rode six winners across the weekend and moves onto 999 for his career. Next weekend, he’ll bid to become only the 2nd Korean jockey in history to ride 1000 career winners.

On a wild weather day in Seoul, Mustang Queen held off all challengers to win the Horse Racing Ireland Trophy. 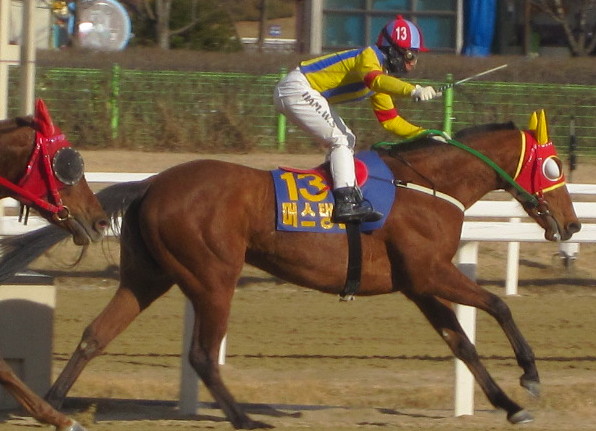 Sent off as the 8/1 fourth favourite in the field of fourteen for the seven furlong Stakes race, Mustang Queen (Concept Win) was quickly towards the front. Taking the lead rounding the home turn, she never looked like giving it up as she ran on for victory by just over a length from favourites Imperial Star and Seungniuihamseong.

A four-year old filly, Mustang Queen was sixth in last year’s Korean Oaks at Busan, the only race in her career so far in which she finished out of the money. A class 2 win last month sent her into today’s race in good form and she duly recorded her fifth win from fourteen starts. 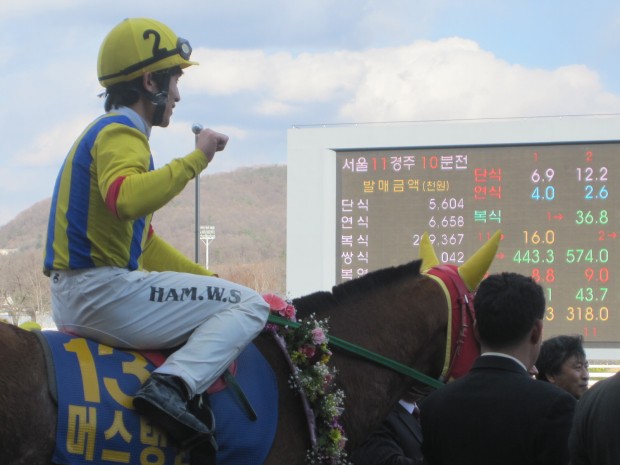 For jockey Ham Wan Sik, it’s a fourth career Stakes victory and comes just a week after he rode his 400th career winner.

The Horse Racing Ireland (HRI) Trophy has been a fixture on the Korean racing calendar for sixteen years now and is one of the longest running exchange races. The Irish authority also sends a jockey each year to participate in the International Jockey Challenge which this year will be held in August.

As ever – and unlike some other authorities who have exchange races here – officials from Horse Racing Ireland were on hand for the prize-giving ceremony. Indeed, HRI’s Mark O’Hanlon took to twitter later on to comment on the day. 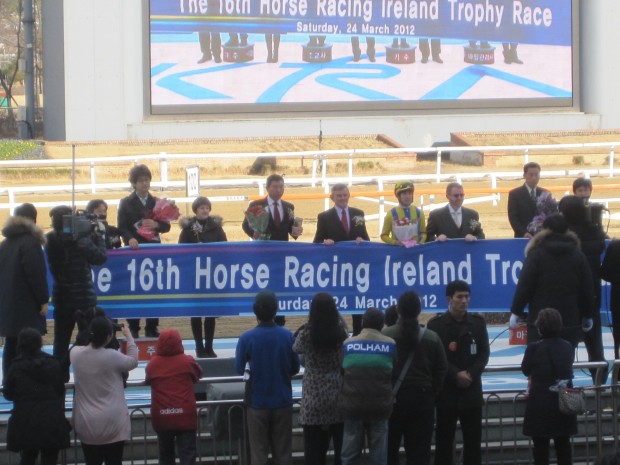 The KRA reciprocates by sponsoring a race in Ireland each year and it was in the Korea Racing Authority EBF Maiden at Leopardstown in August 2008 where a certain colt by the name of Sea The Stars recorded his first ever race win. It wouldn’t be his last.

In Korea there is a saying: “Kkot-Saem Chu-ui”, which roughly translates as the “The cold is jealous of the flowers”. It’s used when the dying winter season returns for one last hurrah, taking out the spring flowers in the process. Dawn broke in the capital this morning with brilliant sunshine. However, the wind quickly picked up and was up to gale-force at times.

Then a sudden blizzard arrived, with race 6 being run under floodlights in driving snow. Thirty minutes later, it was as if it had never happened with the sun out once again, the floodlights off and the snow melted.

The wind kept up though and all in all, it was one of the most unpleasant days at the track this winter. The cold certainly had its revenge on the spring flowers that the KRA has already planted around the track. 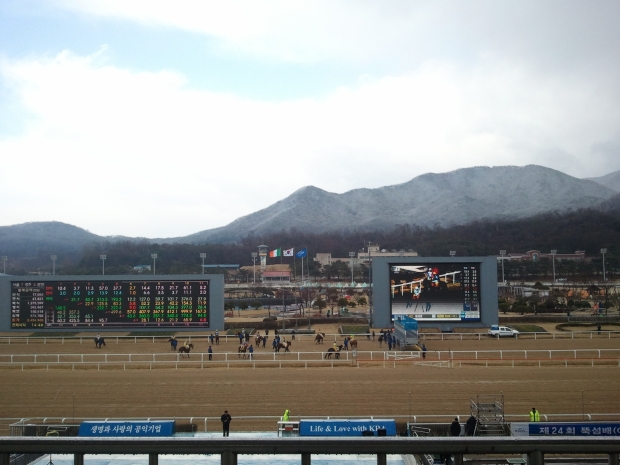 A quick blizzard covered the neighbouring mountains in snow

Sunday is another very big day, with the first Group race of the year in the shape of the Ttukseom Cup at Seoul. Here’s what’s happening when and where: