Plenty went on over the weekend including business being as usual for the Korean runners in the annual KRA Trophy at Kranji in Singapore, Silver Wolf essentially wrapping up the Queens’ Tour after just two legs and French jockey Johan Victoire making quite the impression on his first weekend in the saddle at Seoul

It was a good weekend for a foreign jockey to arrive in Seoul what with a number of the track’s leading riders such as Kim Yong Geun and Choi Bum Hyun being at Busan to ride in the KNN Cup, Djordje Perovic still being indisposed and an ongoing inter-union dispute leading some jockeys not to ride for certain stables.

It took Johan Victoire precisely one race to show what he was capable of, guiding debut-maker Icheon Ssal (Capital Spending) to victory in Saturday’s opening maiden. While the 30-year-old couldn’t add another winner from his seven further rides across the weekend, he did get a 2nd and a 3rd as well as plenty of admiration from onlookers. It looks like Victoire will be busy over the forthcoming weeks. Check out the report and pictures on the official site.

While Silver Wolf (Orotorio) put in quite a run at Busan to cruise to the KNN Cup in a time just 0.3 seconds outside the track record for a mile, the Korean pair in Singapore for the annual KRA Trophy at Kranji on Sunday fared less well. In fairness, to Zentenary, that he beat any horses at all is to his credit but Choegangja was undoubtedly disappointing, breaking adequately enough but quickly weakening and finishing a tailed-off last in the race which was won by Distinctive Darci.

Choegangja had gone into the race looking in peak condition, according to trainer Brian Dean, but came back reportedly fine but having suffered a heat-stroke. Perhaps there is something in that given that in his only two races in warm weather last year he came 3rd of 10 and last of 9, both at class 3 before re-appearing in the cool of November and going on to win five in a row, then missing the break and coming last when things warmed up this June. Anyway, the search goes on for a Korean horse to go to Kranji in June and make an impression. Maybe next year.

This weekend Busan takes its one-week summer vacation so only Jeju runs n Friday. Seoul and Jeju will run on Saturday and just Seoul on Sunday.

Two Korea-trained horses, Choegangja and Zentenary, are in Singapore for the annual running of the Korea Racing Authority Trophy which will be held over 1200M at Kranji this coming Sunday. As in previous years, the race will be broadcast live – without betting – at Seoul & Busan Racecourses during the local Sunday afternoon cards. 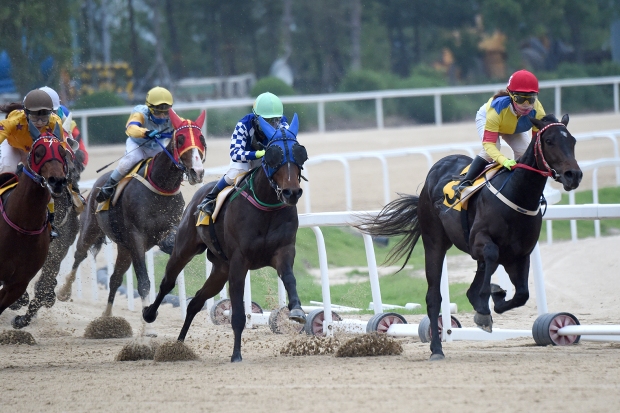 Choegangja, on his way to victory last year, is in Kranji (Pic: Ross Holburt)

The Korean contingent has generally not found this race to be easy and this year looks set to be no exception as they face a strong local challenge attracted by the S$250,000 purse. Zentenary has drawn gate 1 while Choegangja will break from gate 8. Here’s the field (full card at the Singapore Turf Club website here):

This year there’s no excuse for lack of local knowledge as both horses are in the care of Brian Dean, the former Singapore based trainer who has just finished up training in Seoul. Additionally, unlike previous runnings of this race, it was decided this time to put local Kranji-based jockeys on board the two horses and accordingly Oscar Chavez, who partnered El Padrino in his second Asia Challenge Cup at Seoul Racecourse in 2015, will ride Choegangja while Malaysian Kasim A’Isisuhairi gets the leg-up on Zentenary.

The pick of the two, he blossomed after moving to Brian Dean at the tail-end of his three-year-old season, winning five races in a row and moving from class 3 to class 1 in the process. He finally came unstuck when missing the break in the SBS Sports Trophy at the start of June, resenting the kick-back and ultimately finishing last but can be forgiven for that. A US bred, Choegangja was a $40,000 purchase from Fasig Tipton 2-year-olds in training sale in May 2015.

Brian Dean looks to have a lively one on his hands. Choegangja stepped up to class 1 at Seoul for the first time on Saturday afternoon and and absolutely blitzed by no means hopeless set of rivals over 1200M. Swedish jockey Shane Karlsson was in the saddle.

Choegangja (Silver Train) is a four-year-old gelding who had shown promise but not a whole lot else, winning one out of six starts before he was transferred to Brian Dean last autumn. Since then he’s been unstoppable, winning four out of four and transitioning from class 3 to class 1 in the process. Yesterday, he got the jump on the field and never looked back, leading home Canada-bred filly Gaenari by four lengths in a quick time. If he continues his progress, he’ll be a Korea-sprint contender come September.

Aussie trainer Dean continues to get results under the no doubt challenging circumstances of being the first foreign trainer at Seoul. Only 3 of the 51 trainers at Seoul have sent out fewer horses than Dean in 2017 so far and yet he finds himself up in 9th place in the the Trainer Premiership with a vastly superior Win, Place and Show strike-rate than any other handler at the track. Owners may start to take note.

As for Karlsson, he too is showing useful figures. Choegangja was his 4th Korean winner (he won on him last start too) – all of them for Dean. Other trainers may wish to take note of that too.