It’s finally here. The generation that risked being forgotten or worse, finally gets its Derby at Seoul Racecourse on Sunday afternoon. There are 12 races at Seoul from 10:35 to 18:00 while there is also a card at Busan. Racing remains behind closed doors. 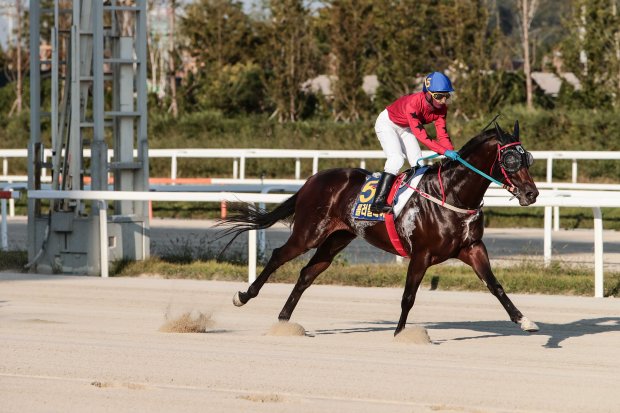 Roller Blade is back. But have the others left him behind? (Pic: KRA)

KRA Cup Mile winner Touch Star Man heads the field but it’s a race with at least nine live chances. Champion juvenile Roller Blade finally returns while the likes of Determination look to have been screaming out for this kind of distance.

This Sunday will see the 23rd running of the Korean Derby! The cream of the three-year-old crop will line up in the 1800m Korean Group 1 where we see eight runners back up from the KRA Cup Mile. What's your on-top selection? @korearacing @SkyRacingWorld @TVG @CandiceHare_ pic.twitter.com/IYw7llcdfo

Here are previews of all of Seoul’s Sunday races with horse-by-horse for the Korean Derby, which has a post time of 5pm in Seoul:

The Korean-bred two-year-old gallopers will kick the twelve-event card off at Seoul on Sunday. The trial of (6) WHITE CHARM last month was very good suggesting the Cowboy Cal colt can put his best foot forward on debut. With a central draw it is expected that Kim Dong-soo will work forward on the grey and find a position in the leading division. The time he clocked in the trial was good enough to ensure he is there come the business end of the race. (11) CHEONGDAM WICKED is another debutant that trialed well back in June. The Menifee filly is another likely to be fired up early and sit prominent in the run. (8) JILJU DAERO is one of a few runners engaged that has had a previous start. The colt finished fourth on debut behind the impressive Heungbaragi. (7) ELITE RULES looks a place chance at best after a trial that was fair.

Three-year-old maidens here with all but one of them having raced at least once before. Only one of them has troubled the judges so far. That’s (8) YONGMARU GU, who ran an improved 2nd on his second outing on July 4th at this distance beaten by well thought-of Soseono Legend. In doing so, he recorded the best time of any of these who have attempted this distance and while that is an extremely modest achievement, it should be enough to put him firmly in the frame here. (6) EUNHYE PADO has shown herself capable of running a useful time as well and tries her luck in softer company today. She gets well back in her races but seems to have a good finish on her and should improve today. (11) PIEONADA got a dreadful trip but still managed to finish 5th on debut at this distance and can build on it today. As for the solitary debut-maker, (2) MYEONGMA TIME went through a couple of trials in good order, running through the line well in both of them and couldn’t really have picked a more accommodating race to debut in.

The third on the card has a mixture of two and three-year-old gallopers to line up over the 1300m. (7) NINE EYE comes out of much stronger events where he clocked some good times over the short course. The Menifee colt has been hitting the line in good style which suggests the 1300m should suit. Moon Se-young will be legged aboard the two-year-old for the first time, which is always a good sign. (2) GOLDEN SWITCH is second up after a midfield performance behind Hansen Choice last start. The filly’s times have been fair and with some improvement second-up, she can run into the money. (1) GOVERNANCE looks next best and with a good draw is capable of sitting closer to the speed today. She passed a couple in the straight last time out over the six furlongs. (4) ACE HAMSEONG looks an each-way chance after finishing second last time out over the 1300m. His time was only fair but with some improvement he is a chance of figuring.

(9) GAJA PLAN was an impressive all the way maiden winner over 1000M on July 5th on what was her third career start. She is up in both class and distance today but while the draw may not be as favourable for her getting an easy lead, she has claims again. (8) GOLD FIELD also got her maiden win at her latest start, albeit for her it was the fifteenth time of asking. So long at class 6 would suggest the transition to the higher grade isn’t going to be easy, however, the time she ran was faster than all but one of her rivals here have achieved at this distance and she must be given another chance. Another up in class is (1) GLORY FIGHTER. She remains a maiden but has finished 3rd on three occasions. Moon Se Young rode her on the most recent of those and sticks with her today. She should be competitive. As for those with experience of this level already, (2) YEOLRIN MUN ran out a solid 2nd over 1400M on July 5th. He has won at this distance already and is nicely drawn to get to the lead once more.

Ten Korean-bred gallopers line up in the fifth where the majority of the runners appear to be out of form. (9) RIDE LUCKY is the one engagement that brings a last start win into the race, which he brought up at start two. He will carry the same weight with the claim of Moon Sung-hyeok being applied. He showed plenty of speed first up when clocking a good time for this grade. (1) NONGBUI SUCHEAHWA looks to map in the first four in running. Kim Yong-geun will be legged aboard for the first time, with the filly drawn the inside for her ninth assignment. She has placed on four occasions from eight starts and this looks weaker than previous assignments. (8) MENI STAND is second up after a reasonable performance when finishing fourth behind Songnam Tiz first up. The Menifee filly should improve off the run, 1200m is not an ideal distance with her best performances over 1000m. She will need to start running out a strong six furlongs END_OF_DOCUMENT_TOKEN_TO_BE_REPLACED