It’s Stayers’ Sunday! Horses who like a bit of distance to get stuck into don’t get many opportunities in Korea but they do – kind of – this Sunday in that the feature Class 1 handicaps at both Seoul & Busan are at the maximum distance in use at the respective tracks; 2300M at Seoul (the Grand Prix distance) and 2200 at Busan. There are in total 11 races at Seoul (10:45 to 18:00) and 6 at Busan (12:40 to 17:05). Previews for Seoul followed by Selections for Busan are below: 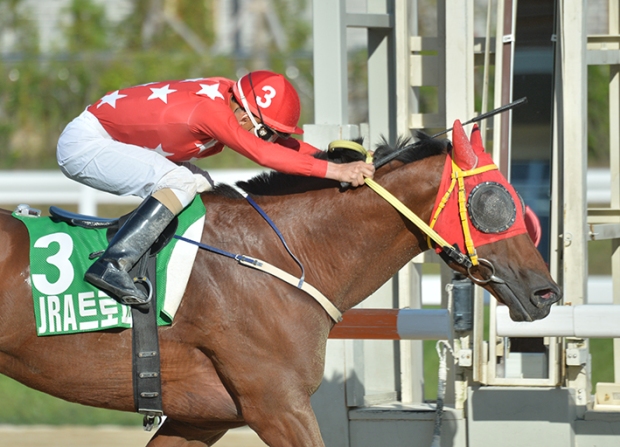 Road Winner will be action at Seoul on Sunday (Pic: Ross Holburt/KRA)

Two standout contenders here will be expected to dispute the honours between them. (2) YAHO THUNDER CAT and (4) WONDERFUL DIXIE were both impressive maiden winners at the end of last year and both ran well on their respective first attempts at this level in January. Yaho Thunder Cat perhaps has the slight edge at the moment and he’s the narrow top pick. (5) SKY STORM was 3rd behind Wonderful Dixie last time out and while he has three-lengths to make up, looks to have the best chance of challenging the favoured pair. (1) FINAL STORM and the up in class (10) DRAGON BOAT are others who may step up.

(12) PUNGMUNEURO has been knocking at the door for a while now, culminating in a good run for 2nd place at this distance last month. In all her previous outings there’s always been at least one obvious one to beat her but that’s not the case here and for the first time she is set to start as favourite. She’ll need to overcome the wide draw and if she comes up short again, (5) WIND RIVER looks best placed to capitalise. She had a bit of bad luck when a close 6th last time and should benefit from the increase in trip today and will be expected to overturn the form on (11) CHEONHA YEOJE, who finished ahead of her. (2) GWANGPOK JUHAENG and (8) FOR J.K both look to be getting closer and can be considered while (3) WONDERFUL HEELS may have been poor on her latest two outings but carries a very light weight here and has shown ability in the past.

(2) HANEULEUL DALRIDA stepped up to this trip last time and ran 3rd having led almost the entire way around. He will hopefully have come on for that and while today’s opposition is marginally stiffer, he can win. So too can (7) HANEUL NARAE. He overcame a poor start to go close over 1300M last time and should suit today’s extended distance. (3) RAON MIRACLE remains a maiden but looked competent when tackling this distance for the first time three weeks ago and can improve. (8) CLEAR GEOM is definitely competent at the trip. He was stepped up to it for just his second career start a month ago and it resulted in his maiden win. He’s up in class but has potential. (5) VICTORY STAR and (6) BAEKDUUI JEONGSANG are others with at least placing claims.

Three-year-old maidens here. (2) FEATHER LIGHT has placed 3rd in both tries at this distance to date. He was a long shot last time out but ran well and shouldn’t need t improve much if he is to win this. The main danger is (4) BARAMEUL GEURIDA. All of his starts so far have been at 1000M (finishing well in front of Feather Light on one occasion) but the extra distance isn’t too much of a concern and he will try to lead all the way. (11) GEUMSUNI STAR and (12) CHEONJI POKPUNG both look to be improving and both come in having finished 3rd on their latest outings. Both are in contention. Best of the rest is (5) INDEPENDENCE.

Very competitive handicap. (9) NIMUI HYANGGI and (10) FULL MOON SKY are both last start winners who are up in class today. Both should be competitive with Nimui Hyanggi, having won well at this distance, the slightly more favoured of the pair. Neither are top pick though. That’s (8) FIGHTING HERO, a winner on debut last October, who just came up short when favourite at class and distance last time out, beaten a length into 3rd. He looks to have talent and can get it right this time. (3) GLOBAL CHEONHA steps up in trip for the first time and has solid claims too while (11) NEUL SACHAN does the opposite and drops down in distance after enduring a tough time around 1700M last month. She should be better today.

Twelve imported horses going over the minimum distance here and the only previous winner among them is (11) PRO HAMSEONG, who saluted over this distance in fine fashion in December. He only managed 4th on reappearance last month but Johan END_OF_DOCUMENT_TOKEN_TO_BE_REPLACED