There are 12 Saturday races at Seoul from 10:4 to 18:00 and one of the stars of this year’s Triple Crown trail, Mask, 2nd in the Korean Derby, returns to action in the afternoon’s feature. Here are the previews: 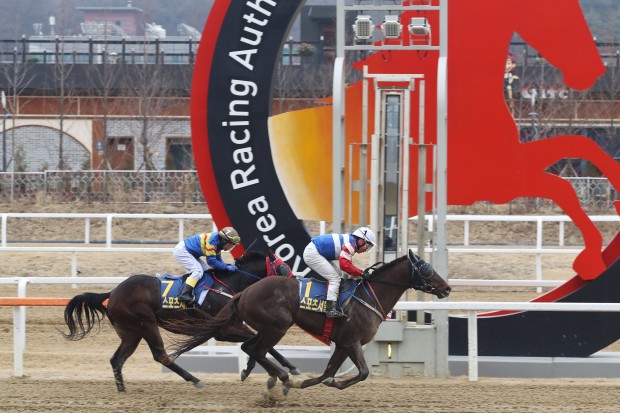 Mask beat Gaon Champ in the Sports Seoul Cup back in April before running 2nd in the Derby (Pic: KRA)

Juvenile maiden to begin with and precisely half of the twelve-strong field have raced before. (1) GEUMA KINGDOM is just a place-finish away from being promoted to class 5 with a 2nd and a 3rd from two outings so far, most recently at this distance. The Animal Kingdom colt is can settle just off the early lead here and should be too strong. Among the others who have raced before, (12) WONDERFUL DIXIE was a useful 3rd on debut in September while (5) RULES ICHEON and (9) WONDERFUL HENNESSY can both improve. Of the first-timers (2) GEOM HONG looks the clear pick having run away with a September trial. She’s half-sister to a couple of reasonable animals (Young Storm and Red Young Myeongun) and could have a few wins in her.

(3) I.B.S QUEEN ran out a four-length winner over 1000M in a fast time on September 2nd on what was her second career start. She’s up in both class and distance here but is well-drawn to get to the front early again and potentially lead all the way. The main danger is (5) SPEED HWANGNYONG, a class and distance winner on September 15th when he came from off the pace to record his second consecutive victory. He carries more weight today but will be a big threat. (4) GRAND DOLPUNG is up in class after a good win at this distance a month ago and must be taken seriously. (9) GLORY VERN ran a creditable 5th in a stiff race on his first try at this class last time out and can build on it today, while (6) DUSON WANGJA is another who could improve here

(8) FANTASTIC QUEEN enters with the most convincing recent form with a win and a 4th place, both at this distance and this class in her latest two. She wasn’t far away last time in a similar strength race and from a similar draw and she could win here. (9) JI SEONI drops back in trip today to the distance at which she landed her solitary win. It coincides with her having shown some signs of getting back into some kind of form last start and while she’s not always the best of starters, she has claims here. (4) THE PRIMA was last seen winning at this distance back in January. She’s had setbacks since and while she wasn’t hugely convincing in trials, she certainly has ability and could go well first-up. (2) BERNARDI SHOW and (6) DOUBLE A are others in the hunt.

(7) ALL THAT CHASE got his maiden win last time out at the tenth time of asking. It had been coming as well and he beat a couple of the others who return here. He’s not the quickest of starters but he can sit behind the early lead here and he could well repeat. (10) MANHATTAN MUSIC remains a maiden after eleven attempts but the Gio Ponti filly drops back in rip after a good effort at 1700M a month ago and looks firmly in contention here. (4) NASCAUI BYEOL came home 3rd at class and distance last time out and while this is a slightly better race, he can aim for a repeat. (8) MEGALIOS and (9) EOUL DEOUL are others who look nicely in to compete for at least a place.

This race is for juveniles only (and two southern-hemisphere three-year-olds). Five of the ten have raced before and one of them, (1) GAON QUEEN was an impressive winner. She scored by three-lengths having made all at this distance on September 9th and it’s very hard to find a reason to oppose here. (9) GOLD HAMMER was 3rd in that race and did enough to suggest he warrants second-choice status here. Of the others who have raced before, (8) DEO DEO BI did nothing too wrong on debut and having previously won a trial, will be fancied by some for improvement. It’s hard to be too confident about the first-timers just yet and a watching brief with most of them is probably advisable although both (3) GLOBAL CAPTAIN and (6) WUJEONGUI HYANGGI looked useful enough in trials and could go well.

(4) KING MESSENGER ground out a narrow win at class and distance on September 8th. It wasn’t pretty and if anything today’s competition is a little stiffer but he has the ability to run better and is narrowly favoured to score again. (3) GWACHEON JANGSA is a winner of two from five so far and is up in class today. It’s also his first time going further than the minimum distance but both those things can be overcome and he should get close. (2) WELLBEING JOY enters off the back of a decent 2nd over 1200M. He’s won at this distance in the past and should be in the hunt. (5) MIGHTY WIN was an encouraging 5th in debut last month while (6) STAR PLATINUM equaled his career-best finish of 3rd on his most recent start. Both can aim for places today.

(3) DOKDO JIGI and (4) L CAR came home 1st and 2nd over 1200M on September 8th at class 4 and accordingly both step up a level here. They both have plenty of potential with three wins apiece to date and of the pair, Dokdo Jigi, who scored by three-lengths in that race, is favoured to come out on top again. However, they both need to beat (6) CALLIOPE. We can draw a line through his latest start in the HRI Trophy on international weekend and focus on the fact that he is already a class and distance winner. He’ll be on pace from the start and could well win. Likewise (1) HAE HU also gets another chance. He’s inconsistent but very talented on his day. (8) TEUKBYEOL STAR the best of the rest.

This is a very competitive contest. (4) ARGO ROCKET returns following a nine-week layoff prior to which he secured back to back 2nd places. He was very quick in a late-August trial and if on top form, can win this. (1) MAGIC ROAD drops back in trip after a couple of good showings in decent races at 1200M. Last time he ran at 1000M, he was beaten by Argo Rocket but he’s one of a number who should get a fast start here and be competitive. (9) GULCHARMNAMUSUP is up in class after two wins from three starts and can be competitive while (10) LUXURY HAPPY was a slightly unexpected winner at class and distance on September 2nd and must be respected today. There are three debut-makers and among them (12) PHOENIX WOLF, is set to be well-supported following a very good trial win last month.

(1) JUMEOK DOKKI came up slightly short when favourite over 1400M on September 9th, coming home in 3rd place. He won last time he ran at this distance though and from the inside gate, should be on speed from the start and can win here. (9) SARYEONI WIN enters off a good 3rd at this distance last time and should be a danger. (8) KING EXPLOIT was further back in the same race, his second consecutive disappointing effort. He certainly has talent though and is perhaps worth another chance here. Similarly (7) THE JIJON has a hard time over 1400M last start but won at this distance as recently as July and can get involved here. (4) M.J. ROAD is another with at least placing claims.

(6) DANCING BLADE drops back in trip after two creditable efforts at 1700M. She’s won two of her six starts to date, including at this distance and she has as much chance as any of returning to the winner’s circle today. (7) LUCKY ROOKIE was a winner at this distance in August before running 5th on his first try at this class two weeks ago. The margins weren’t huge and he can get closer today. (10) WINNING WIN comes in off the back of consecutive 3rd place finishes at this level and should be a threat again. (2) MIGHTY MAMBO and (8) WINNER SPIRIT are others who can come under consideration.

(7) MASK was 4th in the KRA Cup Mile and Minister’s Cup and 2nd in the Korean Derby. On his only start since the Tirple Crown races, he ran 3rd in the HKJC Trophy when favourite at this distance in September. He won a trial at the end of last month and surely returns to the winner’s circle today. He’s one of a surprisingly large number, given the distance, who will want to be on or close to the early pace. They include (3) CONSERVATIVE, who returns to racing for the first time since January and (4) DANGDAE GEOLJAK, back for the first time since May. Both trialled well and could get close first up. Bigger threats, however, may come from the likes of (5) SAMJUNG TAPIT and the up in class (6) HWANGGEUM BISANG.

(6) GLOBAL NEWS has won his latest three to get rapidly promoted to this level. He made all to win by three-lengths over this distance last start on September 1st and he could make it four in a row. This is a very stiff ask though. (2) PHILLANIKE has only raced three times this year but has finished no worse than 2nd in any of them and just missed out by a nose last time . She’s back in after another three months off and should be very dangerous. (7) BIG EAR has put in some solid performances in tough company of late and has solid claims here while (1) KWAEHAN YEBONGSAN is up in class after a good win in a strong class 4 race at this distance a month ago. (11) ROYAL PARK too comes in after a good showing in the MJC Trophy race on international weekend and is another who has strong placing claims.