The Jeju Governor’s Cup highlights an 11-race Sunday card at Seoul and Indian Star will be bidding to win the 1400 Group 3 test for fillies and mares for the third consecutive year. She’ll be up against it though as a tough field of sixteen, including two Oaks winners and a whole host of others line up.  The 1st is at 10:45 and the last at 18:00. There is also racing at Busan with 6 races from 12:40 to 17:10. 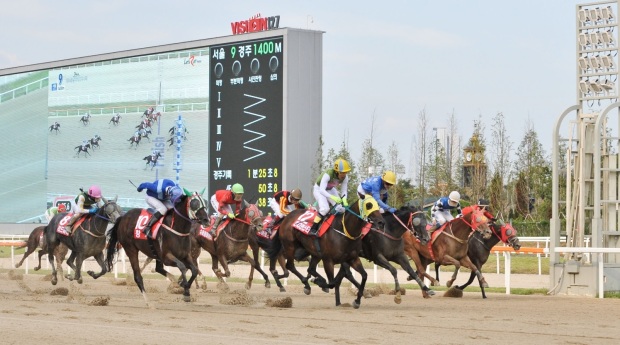 Indian Star won the Jeju Governor’s Cup last year and the year before. She seeks an unlikely hat-trick on Sunday

(7) BANGTAN SONYEO has run 3rd on both his starts to date, both of them in valuable races (he actually was 4th across the line in the Munhwa Ilbo but the “winner” was disqualified). Neither of those races were especially quick but he showed prominently last time and here he will be expected to be on speed early and can win. Of the four others who have raced before, (3) JANGSAN FLY will be expected to improve – he actually ran slower on debut than he did in his trial – while (4) CHEONNYEONUI BARAM went back to trial after his own August debut and showed some potential. There are seven first-timer starters and among them, (12) GEUMBIT JANGIN was perhaps most impressive in trials. He’s a half-brother to plenty who have raced well, at least at lower levels. (9) HOMECOMING posted a fast time and should also go well first-up in what is a better than average looking maiden.

After an inauspicious debut, (4) RULE BREAKER has come back and posted a 2nd and a 3rd in two subsequent starts. The latest being at this distance. He’s well drawn to hit the front early and the only thing that should be broken by the end is his maiden. (7) MEGA CITY and (1) K ZONE came home 3rd and 4th respectively when they raced each other over 1300M on September 15th. Both have been there or thereabouts for some time now and look to be the biggest dangers to the favourite. (9) JEONGMUN K ran on well for 5th last time at 1200M and the additional half furlong today may benefit while (10) ROAD MAN ran a useful 3rd of 7 at the distance at the start of September and returns form a seven-week layoff with the potential to repeat.

Small field but competitive with plenty in the hunt. (6) ISCRA is up in class following an eye-catching seven-length score over this distance on September 15th. It had been coming well as he had been getting progressively closer, never finishing worse than 4th over four starts to date. He made all that day and has every chance of doing so again. (9) DAE UNHA was the one who got closest to Iscra and he is accordingly up in class too – while he won’t be out of his depth, he obviously has plenty to find. A stiffer challenge is likely to come from (5) BARAMUI SORI, a winner on debut in August and who ran 2nd on her first try at this level five weeks ago. It’s her first try at further than the minimum distance, but she should be able to cope. Another leading contender is (7) BACK TO BACK, who looks to be coming back into form after a few wobbles in the early summer. (2) CITY CHAMP drops back in trip after good recent work at 1700M. He’s yet to get his maiden win but can challenge for a place in this company.

After taking a few goes to find her feet at this level, (6) SKY MARINE has run well over her last two starts, most recently being beaten just over a length into 2nd at this distance on September 15th. That was a good race and she beat some decent horses making it hard to oppose her here. (7) NEUNGRYEOK SIDAE also enters following a class and distance 2nd place. Like Sky Marine she’s been a little inconsistent but looks a potential danger today. (1) LUCAS ran a close 5th on his first try at this level just over a month ago. She’s up in trip for the first time and her running style suggests it may suit. There are a couple up in class following maiden wins last start but both (5) I AM WINNER and (10) BLESSING ROAD look as though they have plenty to find leaving (8) CHEONGSU DOLPUNG, who returns after more than a year off but trialled up well last week, and (9) LIVINGSTONE, as potential place-getters.

A maiden for imported juveniles here with just three of the eleven having raced before. (4) HAVANA CHARLIE was favourite on debut on September 9th having blitzed a late-August trial. He was beaten by a super performance by Gaon Queen and it would take something very special to beat him today. The other two with experience offered little on their respective debuts so we’ll turn to the first-timers to try to find some competition. (2) INCHEON SPEED showed plenty of speed when winning a trial two weeks ago and is the clear second pick. (5) FIGHTING LANGFUHR also came out on top in a trial and is the likely third-favourite. (3) SPEED WINNER and (7) MAPLE MOON others to catch the eye and both could go well first-up.

(6) EAST KINGDOM enters in good form and was 3rd last time out (beaten a neck by Sky Marine, who we saw earlier) over 1300M. He steps up to two turns for the first time with little to suggest that it won’t suit and he could be hard to beat. (7) ADELEUI KKUM END_OF_DOCUMENT_TOKEN_TO_BE_REPLACED