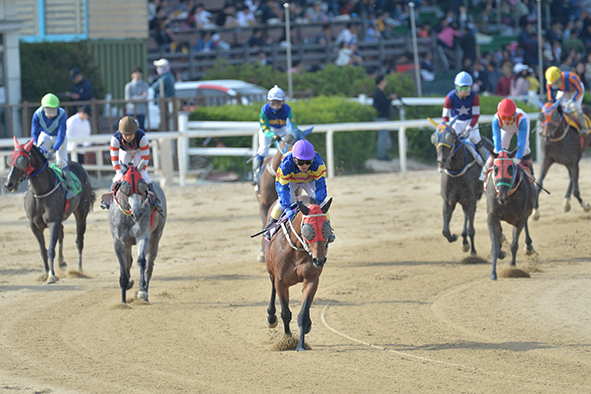 Very ordinary looking maiden for fillies only and (7) SURFING POINT should have enough about her to get things right at what will be the fourth time of asking. She’s outperformed her odds in her latest three and can win for Manoel Nunes and Simon Foster. (3) RAON OPTIMUS has hinted at some ability with a pair of 2nd place finishes at 1700M and 1000M and she looks the main danger. (2) DAEMYEONG SOLAR and (5) NALSSAEN GIRL can improve while in such a race, it’s probably worth keeping an eye on the solitary debut-maker. That’s (6) ADEUKAN SEONGJA, and she trialled up in competent fashion in May.

(2) ROMAN BLADE has been getting closer across three starts to date, culminating in 2nd place on May 27th in a similar filly-only maiden to this. She should be on pace here and should make-all. Joining her on the early speed is likely to be (1) HALLA DAERO, an improved 3rd last time out a month ago and she can be a threat here. (3) JIGONG JILJU has never finished in the top two but is rarely too far away and can go close again for an in-form stable. (6) CLEAN FLOWER drops back in trip after a promising 4th over 100M last month while (4) IRYEO HAYEO has been a touch inconsistent over seven outings so far but has proven capable on her day.

Three debut-makers join five with prior experience and it’s among the ones who have raced before where we find the most likely contenders. (6) SIMON FRUIT was 2nd on debut in April and while he has been a touch below expectations in two starts since, he’s not been far away on either occasion and can get it right today. He’ll be on pace early, most probably alongside (4) ROYAL PRINCE, who has been consistent across five starts so far and steps back to the minimum distance today. He hasn’t shown an awful lot in the way of speed but if he can lead, he may be difficult to overhaul. (7) SEUNGNI LIKE improved last time and couple be a factor as well. None of the first-timers caught the eye in trials but if we had to pick one to consider first-up, it would be (8) RAON BULPAE.

(2) DAESEUNG AGAIN was a solid 4th on debut in a reasonable race at this distance on May 12th. It was a very wet track that day, but he ran on nicely and is the pick to score here, likely seeking to lead from the start. Also making his first start in that race was (7) DAMON ANGEL. She had previously finished ahead of Daeseung Again in a trial and while in the actual race, she was a length and three-quarters back in 5th, she too showed that she has a bit about her and can also improve here. (3) ULTRA MISSILE didn’t perform especially well in that same race but does have a 3rd to his name at the distance and may go better. (1) ADELEUI KKUM tries the minimum distance for the first time but has already managed two 3rd place finishes at further and may be considered. (6) GWACHEON JANGSA improved on what was his second start three weeks ago and is another in the hunt.

(5) PERFECT SOCKS may not have impressed in his latest two efforts, but he is a winner at this class and it is softer company today. He’s not always the quickest out of the gate but so long as he doesn’t give himself too much to do, he can win this. (3) HI EUREKA enters with recent form reading positively and can be a danger. He’s another one who isn’t especially quick to stride but has run on well in his latest two. (6) YEONGWONHAN SUNGAN has been racing against better recently and has held his own. (1) CHOEGOUI CHANSA and (2) CHODONG RACE are others who could go close.

We finally go further than the minimum distance for the first time today – although not much further – for what should be a competitive handicap. (11) RISING SOCKS is up in class and distance having flashed home to snatch her maiden win over 1000M on May 12th. The additional furlong should suit, and she has every chance. (6) GEUMA THUNDER was 2nd in a quick race at 1000M at this level, also on May 12th when the track was very wet.  Unlike Rising Socks, she has proven herself a fast starter and should be leading early with every chance of going all the way. Those two are the standouts but (8) PICOTIN was pleasing enough last time out and could go well again while (1) JEONSEOLUI MANYEO and (9) BULHUUI SEUNGJA look best of the rest.

Since finishing 3rd on debut, (1) LUCKY CHUNYANG has won four in a row, making all each time and has in general, been untroubled. He’s up in class today and this assignment is a good deal stiffer than those he has come through. However, as he’s done everything he’s been asked to, we’re going to stick with him and he can make it five in a row. (11) LEONNING STROM has won his latest two by a combined twenty-lengths and he too is up in class today. The wide draw can be overcome and while he is carrying more weight than he has previously, he too is very capable of getting another win. It would be a surprise if these two up and comers didn’t fill out the quinella, but there are other capable ones too. (2) NEW PARTNER won four of his first six races and while he seemingly lost his way a little around the turn of the year, he ran a good 2nd over 1300M in March and enters following eleven weeks off as an interesting prospect. (7) GLOBAL BANK weakened over 1700M last start but should be much better today while (9) RAON ALICE was a class and distance 2nd on May 5th and can’t be ruled out.

(7) NIKE STREET returned from six months out to register a five-length win over 1300M on May 12th. She is accordingly up in class today but also in distance and it is the latter of those two that is of more concern. Nevertheless, she looks a serious contender. (3) CLEAN UP SECRET is up in class too but in his case, he won at this distance on May 5th and has to be taken seriously here. He’ll join Nike Street on pace early and has proven himself capable of going all the way around two turns. (2) GEUM NOA enters after two useful class and distance efforts and shouldn’t be too far away, while (8) ECHO GOLD remains a maiden buy has run well in each of his latest two, both at 1300M and tries some distance for the first time here. (6) LONG HITTER ran on for 2nd at 1800M on his latest in March and while that wasn’t an especially strong race, he could go well once more.

(5) SINUI MYEONGRYEONG was one of Seoul’s stand-out juveniles of last year but after finishing well-back in the track’s Classic trial in March, didn’t get to take a shot at any of the Triple Crown races. The Hansen colt was narrowly beaten when favourite at this class over 1200M at the end of April and today moves up to two-turns for the first time. He is nicely weighted, and he could win this. (12) GUTONGSA has proven himself competitive at this level with a 2nd and a 3rd from his latest two, both at this distance and he will be a big threat while (3) ARGO FLYING has been putting together some consistent results and steps back up to a distance at which he has gone well in the past. (6) HWAGANG is up in class following victory at this distance on May 6th and should be competitive. (7) BUNGMA DREAM and (10) SPECIAL RUNNER look the best of a competitive rest.

(1) EAST GULCH beat three of these on his way to victory at class and distance on May 12th. It was a wet track that day, but the win had been coming, his stable is in form and he is the one to beat once more. (7) WONDER LIGHT come sin off two 3rd place finishes and a 4th in her last three outings, all at this class. She’s not a fast starter but runs on well and should pass plenty late on. (9) JEONGSANG CHAMP and (3) PRINCE MEMORY are both up in class having finished 1st and 3rd respectively over 1000M on May 6th. The latter has been favourite for three of his four races so far and could finally come good. (2) MENI BADA and (11) EUNHA CHELMA are both accomplished at this level and should be close while the wildcard is (5) PANORAMA SHOW. He raced twice at the turn of the year, registering a win and a 3rd. He trialled up very nicely last week and goes straight into the frame.