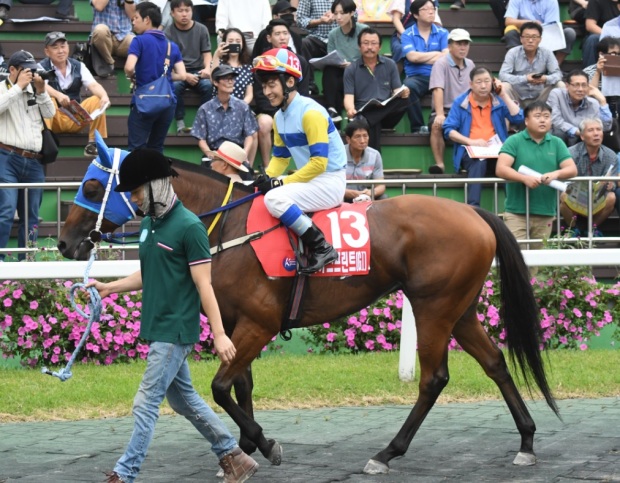 (6) MASK is ready to win. He almost slipped over turning into the home straight on debut in July but still managed to finish 3rd before running 2nd on his return in August. He’ll be on the early speed here and really should be winning. (3) LUCKY BONGHWA was 3rd, two and a half lengths behind Mask in that August race, continuing the progression that he’s shown in each of his three outings so far and he looks to be the main danger although (5) ROYAL ACE has come close once or twice and could be in the hunt too. (2) M.J. CAPTAIN comes in off a 2nd place finish last start and will likely join Mask on the early speed while (10) DAECHEON ACE was a creditable enough 5th of 9 on debut a month ago and the jockey booking will attract some.

Enhanced prize money for this juvenile contest and it sees six first-timers taking on six others who have each started once before. And a number of those experienced ones did well on debut and are likely to be favoured over the newcomers here. (3) KING POSE is the pick, running on fluently for 3rd on debut over 1000M on September 10th and the extra furlong should suit just fine today. (5) EMERALD KING and (12) BAEKSAN GUNJU ran 3rd and 4th as they debuted together at this distance on September 3rd and both should be in the frame once more while (2) JUMEOK DOKKI was also 4th on debut at 1000M, coming late from well off the pace after a slow start and can improve today. Among the debut makers, (4) WITH FRIENDSHIP looked the sharpest in trials.

(3) PERFECT BIC C beat (2) YEONGWONHAN SUNGAN but a nose as the pair raced 1st and 2nd over class and distance on September 9th. Both had been in solid form going into that race and both can continue that here. There are threats though. (1) BOLD NINER enters after three consecutive 5th place finishes at the distance and looks nicely in with a good draw today and should get much closer. (6) SO ARA CHEONWANG has won just once in twenty one prior attempts but his latest effort gives cause for optimism and he may be considered although at this distance, his start is a potential issue. (5) GIJEOGUI JEWANG raced in August for the first time this year, finishing 2nd and getting promoted to this level as a result. He could be the wildcard.

Another competitive contest although (1) DREAM YEONGCHEON looks to have the edge. A winner on debut in March 2016 he didn’t return to the track until July of this year but has a 2nd and a 4th in two solid contests since returning and on what is his first race at further than the minimum distance, he can get out of gate 1 into a lead he can keep all the way. (6) HANSEONG KING is still seeking his maiden win. He started his career well and after going a little cold across the summer, seems to be back on track now with an encouraging 2nd place at this distance on September 9th and he looks to be the main danger. (4) BAEKSAN ISLAND was a mildly surprising winner at class and distance last month and while he carries more weight today, mist be respected accordingly while (3) BOSEOG SANGJA and (7) HYEONMU are also in at least the hunt for places. (10) SHARK PARTY is up in class without a win but may still be competitive.

The form of this lot is not very impressive so (1) MONTEVIDEO’s 5th place on debut a month ago takes him into the top line of favourites for this contest which brings together three debut-makers and nine experienced ones, all of them imports. The only previous winner in the field is (11) TRICKER, who prevailed over 1300M in July but couldn’t follow up on his return last month. He should be there or thereabouts today. The favourite, however, is (2) ACE KING. He could only manage 9th on debut in August but absolutely romped through a trial three weeks ago, “winning” it by eight-lengths and if he brings anything like that kind of form to the track, he’ll win this too. He’ll likely be the fastest starter. (7) MIGHTY SSING should also improve on his debut run while (10) HAEORABI looks the pick of the first-time starters.

(11) HANEULUI STAR followed up a good 3rd place on debut with his maiden victory over 1300M at the end of July. He returns after eleven weeks off here, up in class and also up in distance to two turns. Neither should be a problem and he’ll be expected to take this race on early and go all the way. (5) SOCCER GLORY has looked the type who may appreciate an extended trip and she gets the chance to prove it here while (3) CHUKBOGUI YEOLMAE registered a 3rd place at this distance back in April and oddly gets another go at it for the very first time since then; her latest six outings have been middling efforts over short trips. (4) SAMDO TONGIL is a one-paced type who should see plenty come back to him late on in the race while the wildcard is (2) JAELONGI. He’s never raced at further than 1000M but returned from six months out with a solid 3rd place in September.

Competitive contest here but (10) LEAD MONEY gets the nod. She comes in having finished 8th of 15 in a stiff Jeju Governor’s Cup at the beginning of last month and should be far more comfortable back in this more amenable company today. It’s been a while since her last win but expect her to look to lead from the gate here. (11) FIRE DREAM enters following a win and a 2nd place both at class and distance and has every chance of being close again while (1) GEUMGANG CHEONHA returns to this distance for the first time since February and looks better equipped for it this time. (3) JISANGGEOTAP and (5) SUPER BROAD are others who can get close.

Tricky one this. (7) KRYPTO KID looked good when beating a couple of these last time out on his way to 2nd place over 1800M but you’d fancy he’ll need to find more today. That’s because both (4) URIGA BON and (6) YESANGBAEK SEUNG look very nicely in here. Both enter with solid recent form and will carry light weights and should be involved at the business end of the race. (5) SOJUNGHAN MANNAM has also been decent of late and can go well again while (11) CHEONGDAM DAERO tries two turns for the first time and is also to be considered.

Verdict: (3) SILVER WOLF is cruising to Champion Filly & Mare honours having won both Ttukseom and KNN Cups this summer before proving her class and versatility by overcoming a bad draw to run a very good 5th in the Korea Sprint behind Japan’s Graceful Leap. She can keep her tremendous season going with victory here. Seven-year-old pair (8) PARANG JUUIBO and (10) WONDER BOLT look to be the primary dangers while (1) CLEAN UP BINGO and (7) CHEONJIGA are the up and coming wildcards.

(11) NEW PARTNER has won her latest two and three from five in total and she looks best placed to get another here. She’ll want to be on the early speed so the draw isn’t ideal but she can win. There are dangers. (4) KWAEHAN YEOJANGBU was 4th behind New Partner last time and has plenty to make up but is drawn better with a weight advantage today while (8) GOLD FASHION comes in after a useful 2nd at class and distance last time and must be considered. (1) BEYOND LIMIT and (6) NEON GAMDONGIYA are others in at least the placing frame.

(12) GUTONGSA broke the track record at 1300M back in July but saw his winning streak come to an end at three last time out at this distance. He was beaten by (11) JEONSANGOREUM but we’ll be expecting Gutongsa to put things right today. (9) ULTRA ROCKET was 4th in that race on September 9th and he’ll be a danger again while (7) SCARLET WITCH comes in following a really strong 2nd place in the MJC Trophy last month over 1200M and must be taken seriously too.