Banjiui Jewang took the honours in a dramatic finish to the feature race at Busan on Friday. Peter Wolsley’s 4-year-old got the best of a tight four-way finish to the 1200M Sprint.

Having won four of his first five starts – the only loss being a 2nd place to Power Blade in the 2015 Breeders’ Cup, Banjiui Jewang (Ecton Park) was seen as one of the leading contenders on the 2016 Classic trail. It wasn’t to be though. 7th in the KRA Cup Mile and 5th in the Derby was followed by a series of setbacks that saw him miss the final six months of the season.

He finally returned this January and while it seemed he’d lost his old form completely, he perked up with a 2nd place in early April. That was followed up two weeks later by a win – his first for 14 months – which led him to be favourite for Friday’s race. Under Jo Sung Gon, Banjiui Jewang hugged the rail throughout and just got up to defeat the fast finishing Triple Party by a nose. 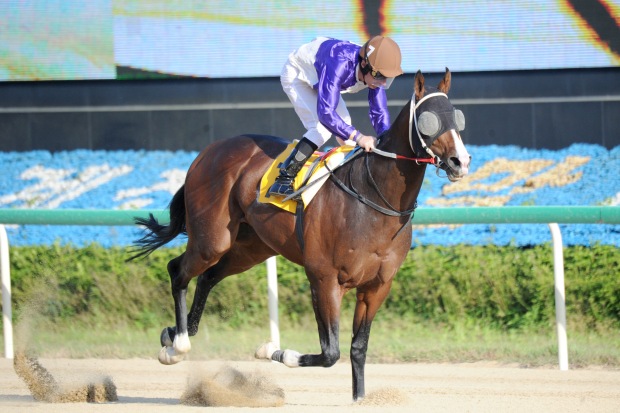 One race earlier in race 9, Thomas Gillespie’s Mujeok Wonderful (Tiz Wonderful) sauntered to a 7-length win under Cypriot jockey Marios Mina. It was a second win in four starts for the US import. Also in the winner’s circle was Francisco Da Silva; he partnered Pink Blade to victory in race 7.

*Later in the evening over in Singapore, Moon Se Young had his first rides at Kranji. As expected his three mounts (two scheduled and one additional spare), didn’t trouble the placings.