4. CHODONG RACE – 5th on debut a month and can have come on for it. END_OF_DOCUMENT_TOKEN_TO_BE_REPLACED

A confident Darryl Holland couldn’t have been more emphatic: “I wouldn’t swap my mount” the jockey declared as he prepared to partner Indian King in Sunday’s Korean Derby (KOR G1) at Seoul Racecourse on Sunday afternoon. The KRA Cup Mile winner heads into the race looking to add the 2nd leg of the 2017 Korean Triple Crown to the first jewel he won at Busan a month ago. 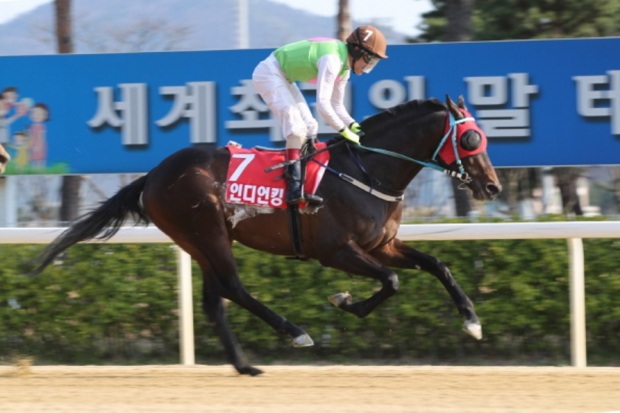 Meeting the media, Holland bristled at any suggestion that the 75/1 Indian King’s Cup Mile victory was down to chance. “I don’t think there was any fluke about the win because he did it the hard way”, he said of Indian King taking up the running a long way out and staying on to win by half a length from the fast closing Royal Ruby. Nor will the distance or the outside gate be an issue: “We’ve got one furlong more to go and I don’t think that will present a problem…I don’t think the gate is a big problem. I’ve rode in enough big races all around the world to overcome it.”

Nevertheless, as much as Holland praised his horse, many observers felt at the time that the decisive factor in the race was the jockey himself and Indian King isn’t expected to start as favourite for Sunday’s showpiece. Royal Ruby, runner-up in the mile, returns again and the Peter Wolsley trained colt is set to be a big danger again as is 3rd placed American Power whose jockey Francisco Da Silva senses an opportunity to turn things around: “There was only half a length between Indian King and my horse. Royal Ruby was there as well and I expect those three to fight again. 1800M is no problem”.

In the Cup Mile those three were five lengths clear of pre-race favourites Daeho Sidae and Final Boss. Cypriot jockey Marios Mina will get the leg up on Daeho Sidae for the first time and was in good spirits. “My horse is in great condition and training very well” said Mina, “the last race wasn’t the best of him”. It wasn’t the best of Final Boss either who didn’t enjoy travelling to Busan and arrived in the parade ring looking a shadow of the horse who had won his two tune-up races in explosive fashion but may be better back on home sand. Here’s that Cup Mile:

There are ten runners in total in the Derby:

1. Lion Rock – He was undefeated heading into the Cup Mile but stumbled coming out of the gate and was never involved. There is still a feeling that we may not see the best of him until later this year. He’s a full-brother to Triple Nine, who ran at the Dubai World Cup Carnival. If he gets away ok this time, he is expected to sit handy.

2. Daeho Sidae – Commanding wins over 1800M and a mile saw him sent off as slight favourite in the Cup Mile but he wasn’t able to reproduce the kick in the home straight that he has shown before and ended up 4th. Better is possible. Likely to settle in the rear of midfield.

3. Taeyangui Sinhwa – A stablemate of American Power, he didn’t run in the Cup Mile. A good winner over 1400M a month ago, this is his first try at further so there are some unknowns and he is the second string. Was beaten by Indian King in March. In his races so far, he has settled in midfield.

4. Adele Ace – A stablemate of Daeho SIdae he gets to take his chance having scored a seven-length win over a mile on April 7th. It was all the way down at class 5 though and it was his maiden triumph. Looks to have plenty to find. He has tended to settle handy or in midfield.

5. American Power – Just a head behind Royal Ruby in the Cup Mile on what was just his second start of the year having been surprisingly beaten in the first of them. He won all three as a juvenile. From Busan’s top stable, he will be very well supported and may start as favourite. Not usually the quickest of starters, it’s his first try at the distance but he should get back.

6. Final Boss – Last year’s champion juvenile didn’t look himself at Busan for the Cup Mile but despite that, he still finished off the race very well, quicker than all but Royal Ruby and American Power in the final furlong having travelled poorly for the first half of the race. He won at this distance with dismissive ease in February. It will be important to see him in the parade ring. Expected to be on the early pace today.

7. Muhan Yeoljeong – A touch unlucky in the Cup Mile, never really finding a run and ending up in 7th place, he had been very impressive in beating some useful horses over a mile in his preparation. 3rd behind Final Boss and Daeho Sidae in the Championship Juvenile race last December. Runs best when on or close to the early speed.

8. Jangsan Power – He didn’t go to the Cup Mile but won three consecutive races between January and March. 3rd on his first try at 1800M last time, running on well. Most likely be ridden in a forward position today.

9. Royal Ruby – There weren’t high hope of him as a 2-year-old but he won three races in a row to begin 2017 including twice at this distance beating some good horses along the way. Almost got up in the Cup Mile. Barrier is irrelevant as he’ll get back and Aussie trainer Peter Wolsley has a big chance of winning his first Derby. He will likely settle towards the rear of the field.

10. Indian King – The Cup Mile winner may not start as favourite but don’t rule him out. He ran on strongly at the end having led for a decent portion of the race. As before he’ll most likely settle in midfield and if the opportunity comes, there’s no reason why he can’t take it.