Had we been told before the 2017 Godolphin Mile that Triple Nine would ultimately finish just one place behind pre-race favourite North America, we may have been very excited. Well that’s what ultimately happened. That North America weakened to finish at the back of the main group with Triple Nine, for whom it proved a race too far, many lengths further adrift, might have been disappointing but does nothing to detract from what was a wonderful Carnival from a Korean perspective. 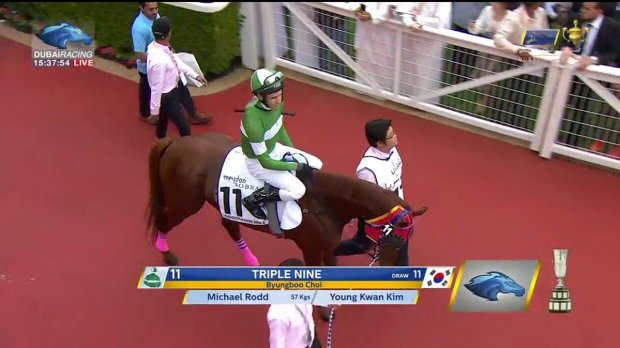 Naturally, there are a bucket load of excuses that could be put forward for why Triple Nine didn’t do himself anything like justice (wrong trip, bad draw, muddy track of the type he lost to Beolmaui Kkum on last year, tired after a long campaign and so on and so forth) but it doesn’t really matter. It’s racing. It happens.

As it was, the closest Triple Nine came to a win ay Meydan was his first appearance on January 19th, when he closed strongly but just a little late to run 2nd to Hunting Ground over 2000M. The gutsy Triple Crown winner Power Blade landed consecutive 3rd places over a mile and 1900M before the pair of them both ran 5th in their respective Group races on Super Saturday.

Then, of course, there was Main Stay. He and Seoul Bullet both lined up for the 1200M Dirt Handicap on January 19th and for the first time there was real pressure not only to perform well but to actually win the race. As Dubai Racing TV pointed out as the horses came out onto the track “this race really is the Koreans’ to lose”. Seoul Bullet was slow out of the gate but ran on for 4th but Main Stay made no mistake. The race was won with a furlong to go and Terry Spargo’s “Chalk one up for Korea” call has been played at Seoul & Busan Racecourses every week since.

Seoul Bullet would pull up lame and play no further part in the Carnival as indeed would Main Stay after his second run three weeks later.

While Main Stay gets to go down in the history books, arguably the most significant result was that achieved by Diferent Dimension when he defied odds of 33/1 to come 3rd over a mile on turf on February 11th.

It was the first time for a Korean horse to run on turf at the Carnival and the race was well received back home not only because of the result but also for the way the horses ran tightly together as opposed to the wide margins on dirt. Plans are at an advanced stage for a turf track to be installed alongside the sand one at Seoul Racecourse and if the project is to be successful,  a substantial shift in mindset among horsemen in Korea in going ot be required. Actual proof that a Korea-trained (albeit by an Australian) horse can run well on turf is surely the best way to start that process.

Korea’s runners at this year’s Carnival were made possible by the performance of Success Story last year, his pair of 3rd places giving courage to owners and trainers. The unique nature of the Carnival also makes it ideal for a nation wishing to develop its racing, such as Korea. The horses get to spend a number of months in Dubai as do the grooms and workriders. They get to work alongside local grooms and riders and train alongside horses from all over the world providing an opportunity both to observe and to learn. Top international jockeys ride the horses – this year Ireland’s Pat Cosgrave handled the bulk of riding duties of the Korean string and a fine job he did too, both in work and in the races; his exhausting ride in Power Blade’s second outing standing out.

That regular Carnival races are competitive but not overwhelming also gives encouragement. The most exciting thing now is to see who emerges as a contender to make the trip in 2018.