There’s news on the overseas jockey front with three new additions to the licensed ranks from the start of this month.

Darryll Holland was most recently in Korea to ride in the Keeneland Korea Cup in September (Pic: Ross Holburt)

Darryll Holland, who enjoyed a successful spell at Busan a couple of years ago, returns to the south coast on a four-month initial license. He’ll be joined by Italian Mirko Sanna. Meanwhile at Seoul, Jan Havlik is set to join. The Slovakian is set to renew his rivalry with Djordje Perovic with whom he has reportedly regularly competed with across Europe. Meanwhile, Marcello Belli has come to the end of his initial four months and has been renewed for a further six:

Jan Havlik (42) turned professional in 1994 and in addition to his native Slovakia, has ridden in many countries across Europe for in excess of 300 career winners. He will be based at Seoul Racecourse.

Mirko Sanna (32) is from Italy. He began race riding in 2000 and has been primarily based in Italy but has also ridden in Malaysia, Australia, Germany, France and most recently in Canada. He will ride at Busan Racecourse.

Darryll Holland (44) is a former Champion Apprentice in the United Kingdom. He returns to Busan Racecourse where he rode 66 winners from 350 mounts between February 2013 and June 2014.

Marcello Belli (44) has been licensed at Seoul Racecourse since August 2016. The Italian jockey has ridden 4 winners from 88 mounts and his license has been extended for a further 6 months.

In other jockey news, 2010 Korean Derby winning jockey Park Geum Man has opted to turn in his license. The 37-year-old debuted when Busan Racecourse opened in 2005 and rode 270 winners from just under 3000 career rides. His license expired at the end of November and he didn’t request a renewal. 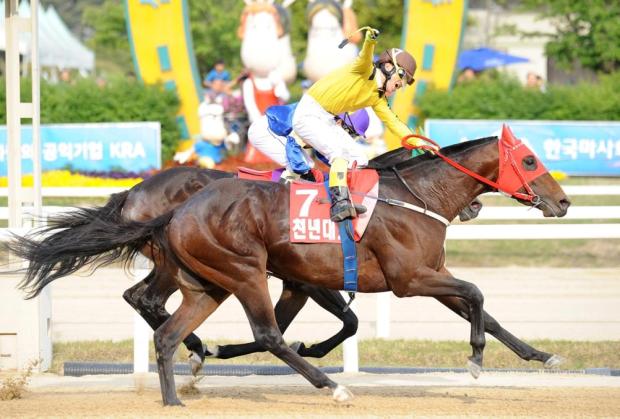 Park had a relatively slow start to his career but under the guidance of trainer Peter Wolsley developed into, for a time, one of the top riders at Busan. His biggest win came on Cheonnyeon Daero in the 2010 Derby and he would go on to win the Busan Owners’ Cup on the same horse later that year. His other two group race wins both came in 2012 on Gyeongbudaero in the 2012 KRA Cup Mile and on Yapung in the Breeders’ Cup.