See here for a runner-by-runner preview of the President’s Cup. Full English race cards can be found here and see below for a race-by-race preview of the whole day (click continue reading):

Five first-timers and five with prior experience here and we’ll go with the experience. (7) K KING has shown improvement over his two outings to date and can keep that going here. He should lead from the gate and can win. (8) CHARMING GOOD was an encouraging 4th in a tight race on debut last month and also improve today while (4) RAON ROCKY also showed promise when racing 5th on debut on October 2nd. Among the debut makers, (2) BEST CAMP looked the pick in trials.

click “more” to continue…it’s too long to keep on the front!

END_OF_DOCUMENT_TOKEN_TO_BE_REPLACED

Along with the Korean Derby, the President’s Cup is the richest race in Korea restricted to locally bred horses. That means it usually attrcts the best from Seoul and Busan and this year is no exception as Triple Crown winner Power Blade takes on his stablemate and winner of this race last year, Triple Nine over 2000M at Seoul Racecourse. 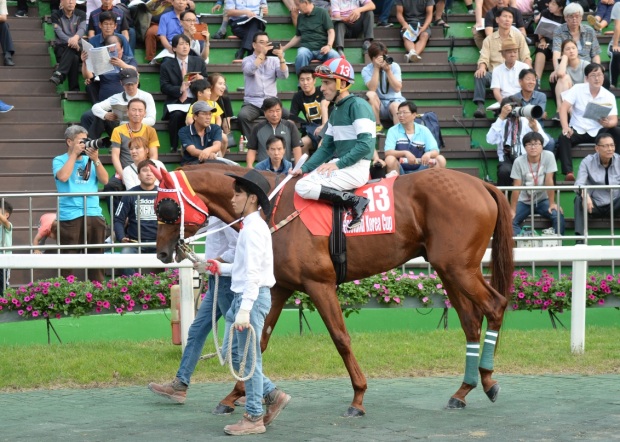 Triple Nine was 3rd in the Korea Cup – he returns to Seoul as potential favourite for the President’s Cup (Pic: Ross Holburt)

Here’s a full run-down of the field:

1. Success Story [Peace Rules – Power Pack (Lil’s Lad)] 5 G (23/10/3/6) – You Hyun Myung
He was gelded last month and won’t be returning to the Dubai World Cup Carnival int he New Year. Two 3rds and most recently a strong 2nd behind Triple Nine in a Stakes race in August. He’ll be on pace early. Needs to be sensibly ridden to give him a chance of holding off Triple Nine late on.

2. Sotong Sidae [Gold Money – Myeonggauihuye (Black Minnaloushe)] 5 G (34/9/5/8) – Park Byeong Yun
Probably Seoul’s best he comes in having won back to back class 1’s over 1800M both in his familiar fast closing fashion. He will go back as usual and he can beat plenty in the closing stages.

3. Zettabyte [Menifee – Fight Back (Sakura Seeking)] 3 C (11/4/4/1)
4th in the Cup Mile and then 2nd to Power Blade in both the Derby and the Minister’s Cup, he makes a strong case for being the 2nd best of his his crop. Returned to winning ways with a facile five-length win at Busan in September, if he can be reasonably handy, we know he can finish strongly at this distance and a place is possible.

4. Pinot Noir [Capital Spending – Neungnyeokchungman (Pacificbounty)] 6 M (29/7/8/2) – Park Hyun Woo
One of the best racemares in Korea, she began the year with a Listed and a Stakes win but has struggled a little of late. Beaten by Brig in September she could only manage 5th in the Jeju Governor’s Cup last month. Today’s distance is ideal but the competition may be a little stiff.

5. Royal Impact [Cielo Gold – Skeemo (Meadowlake) 5 H (34/5/6/8) – Song Keong Yun
Ten lengths behind Power Blade in the Gukje Sinmun last month and that was only because the race was only over 1400M. Creditable 5th behind Triple Nine and Success Story in the Owners’ Cup but he has too much to find here. Most likely to settle at the rear of the field and hope to pick some off late on.

6. Triple Nine [Ecton Park – A Little Poke (Pleasant Tap)] 4 C (18/10/6/1) – Seo Seung Un
Bested Power Blade by four lengths in what was admittedly a rather crazy running of the Korea Cup. He is very good but has suffered surprising defeats to Diferent Dimension and Beolmaui Kkum this year. He finished very strongly in the Cup and the distance should be ideal. He has a big chance of successfully defending his title.

7. Brig [Menifee – Delicias (Deputy Minister)] 6 H (36/9/8/1) – Djordje Perovic
Returned to form recently with a pair of 2nd places in class 1 company, including at this distance. Narrowly beaten a neck last time, a further nose ahead of Impetus, who also goes here. HIs improvement in form has coincided with Djordje Perovic starting to ride him but even so, this will be challenging.

8. Power Blade [Menifee – Cheonmacheong (Lost Mountain)] 3 C (11/8/2/0) – Kim Yong Geun
Many thought that the Korea Cup would be a race too far for the Triple Crown winning colt but he raced well and came home 4th. That’s his only defeat this year and he returned to Busan to win the Gukje Sinmun last month beating Seoul Bullet who burnished his own credentials with an easy win last week. Versatile but expected to be close to the early pace here, he can win.

9. Cheonji Storm [Admire Don – Great Thought (Empire Maker)] 3 C (10/5/2/1) – Ham Wan Sik
An exciting colt still on the way up. He was 6th in the Korean Derby but has two wins from three outings since including the HRI Trophy at this distance on international weekend. He’ll be on the speed early and shouldn’t be over-matched. He’s the wildcard choice for a place.

10. Baedari Bobae [Colors Flying – Geumgang Gongwon (Pacificbounty)] 3 C (15/3/6/3) – Lee Sung Jae
3rd in the Minister’s Cup, four lengths behind Zettabyte and eleven behind Power Blade, he has some catching up to do. A pair of indifferent performances since don’t inspire confidence in him doing it here. Usually settles in midfield.

11. Impetus [Exploit – Miss Stravinsky (Stravinsky)] 6 H (36/7/3/9) – Jo Jae Ro
Beaten a nose into 3rd place by Brig last start, less than half a length behind the winner. However, the last time he won was July of 2015 and that doesn’t look set to change here. Given his draw, he’s likely to be ridden patiently.