Late last Wednesday afternoon I arrived into London’s Liverpool Street Station and noticing that the Evening Standard is now free, picked up a copy as I headed off into the bustle for an exciting evening in the Greatest City on Earth (ok, to eat Marks & Spencer sandwiches and drink cheap wine in an overpriced hotel room in the Greatest City on Earth). 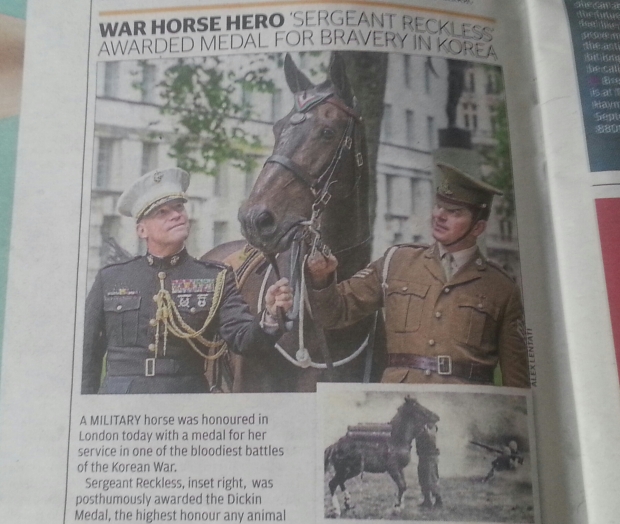 On the second  glass of Prosecco and having established there is still nothing on British TV, I opened the Standard and was mildly surprised to see on page 8 the familiar black and white picture of the Korean warhorse Sgt. Reckless coming under fire in battle. It turned out that that very morning at the Korean War Memorial in London’s Victoria Embankment Gardens, Sgt. Reckless had been posthumously (she died more than 50 years ago) awarded the Dickin Medal, which is Britain’s highest honour for an animal who has served in conflict – the animal equivalent of the Victoria Cross.

Her story has been told many times before, including on this site but over the past few years, it’s been told most prominently by American writer Robin Hutton, who set up the website Sgt.Reckless.com and in 2014 published a book about the horse, which reached the New York Times Bestsellers list for its category. The Dickin Medal sounded like it would have the hand of Hutton behind it so I messaged to inquire: “Yes! I was there” came the answer “HRH Princess Alexandra presented the Dickin to the Marine Corps. attache and then a smaller one for me. It was awesome!”

Awesome is one way to describe Hutton’s dedication to this horse. A few years ago I corresponded with her during the preparation of her book and met her briefly in Seoul earlier this year. Hutton was in Korea with sculptor Jocelyn Russell, with whom she had worked to create a monument to Sgt. Reckless at the National Museum of the Marine Corps. in Quantico, Virginia. A similar monument is to be installed in the Korean county of Yeoncheon – site of the Battle for Outpost Vegas and close to the present day DMZ – and the pair had traveled to view the site and participate in a number of other Marine Corps. veterans’ functions across the peninsula and on Jeju Island. They also visited the current Seoul Racecourse – complete with its own Sgt. Reckless tribute – and also the site of the former Sinseol-dong track in downtown Seoul.

The story of Sgt. Reckless is a very American one and as such was barely known in Korea until recently. Hutton’s passion and energy for her cause has begun to change that and “Achimhai” as she was supposedly called in Korean, is gradually seeping into the public consciousness here. While that’s especially true in the small towns near the battlefields where her exploits took place – and where savvy entrepreneurs have naturally been quick to try to cash in – she’s also making more general headway. A children’s book was published (albeit one that bears little relation to the actual story) and the Korea Racing Authority runs an annual “Achimhai Memorial” race on the weekend closest to the anniversary of the outbreak of the Korean War. A number of mainstream Korean language news outlets also covered the Quantico memorial unveiling.

The Korean media has picked up on the Dickin Medal award too (Korean) and the Sgt. Reckless story will be sure to get more coverage here when the Yeoncheon memorial is dedicated. The story would, of course, make for a good film and given the current success of domestic Korean War movie “Operation Chromite”, perhaps that is not too far away either.

At the ceremony in London for Sgt. Reckless, the medal itself was worn by Somme, a horse from the King’s Troop mounted artillery. In addition to the London Evening Standard, numerous media covered the award, including the BBC, ABC News and Horse & Hound.