Korea’s rating system, introduced last year, has received its first annual check-up. And after a review which began last September, a major overhaul has been administered with completely new rating bands to take effect from February. 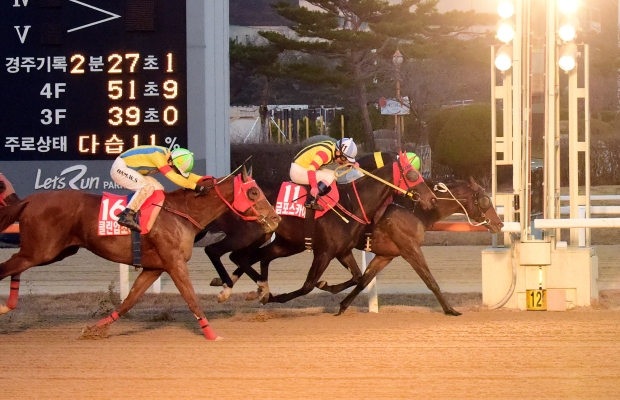 More finishes like this, please! Actually, this was the Weight for Age Grand Prix last year (Pic: KRA)

The new bands are narrower – and lower. All horses currently racing have had their ratings adjusted accordingly. Every horse currently at class 1 has been dropped 20 points, while those in class 2 to 5 have been adjusted on a proportional scale. As before, class 6 will be for new and unrated domestic bred horses. The before and after looks like this:

Another development is that allocated weights in handicap races at Class 5 and above will include a reduction in weight for 2 year-olds and 3 year-olds as follows:

Additionally, fillies and mares in handicap races will receive a reduction in weight of 2kg.

All Korean-bred horses will start at class 6 and first time winners will generally be allocated a rating of 27 and placed in class 5. Horses who register more than one placed finish at class 6 and show form may also be eligible to be rated and move up to class 5.

As before, imported horses will start at class 4. They will receive an initial rating of 42.

This looks a promising development, especially if it enables horses to go down as well as up – the rarity of this being the main issue with the original system – and the figures seem more in line with most international systems but the proof, as ever, will be out on the track.

There are over 100 horses at class 1 at Seoul, with around 60 at the same level at Busan. Beolmaui Kkum is the top rated horse in Korea following his win last Sunday but his rating now is 115, compared to his previous 135. Here is the full list of class 1 horses at Seoul and at Busan.

One interesting angle to watch over the next couple of months could be any in-form fillies or mares; they’ll now get an allowance in handicaps and keeping a keen eye on them may be a prudent course of action for punters.