We’re a couple of weeks into the 2016 racing season and there has been plenty going on already both at Seoul and Busan, as well as further afield. 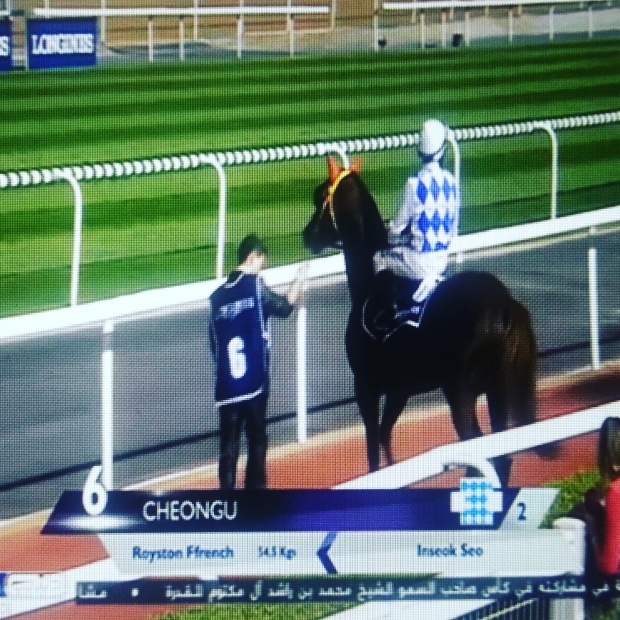 The main story for Korean racing so far this year has to be the Korean horses at the Dubai Carnival. While Success Story is expected to make his debut on January 21, Cheongu ran on the opening night last Thursday and did ok.

Despite missing the break slightly and also losing a shoe in running, the four-year-old Old Fashioned colt finished well in touch with the pack, ending up 5th of 8 runners under British jockey Royston Ffrench.  Cheongu will get another chance either at 1400M or most likely, again at 1200M, later on in the carnival.

Cheongu’s trainer is Seo In Seok and he was back at Seoul on Sunday in time to see his mare Bichui Jeongsang comfortably win the weekend’s feature race. Bichui Jeongsang (Wildcat Heir) had downed Asia Challenge Cup winner Choegang Schiller over 1200M in November and was stepped up to 1800M for Sunday’s class 1 feature. And under Nicola Pinna, she made light of her 59kg impost racing away from the field in the final furlong to win by almost three lengths on the line.

At Busan, there was a new name in the Class 1 winner’s circle. Yuseong Dream (Giacomo) was making his first start at the level following back to back wins at the end of 2015 and the four-year-old completed his hat-trick, making almost all under Kim Dong Young.

Pasquale Borelli is showing the way in the very early stages of the Busan Jockey Championship. The Italian jockey rode a double for trainer Peter Wolsley on Sunday afternoon to take him to four winner for 2016. Tied for first place is Seo Seung Un, who rode a treble on Friday and another one on Sunday and who seems to be very much enjoying his new surroundings at Busan after transferring from Seoul on January 1.