Gamdonguibada, New York Blue and Star Bolt were the quickest out of the gate – Joy Lucky was the slowest. And over the course of a mile nothing changed as Gamdonguibada proved a class apart from the rest, cruising to the 2nd leg of the Queens’ Tour at Busan this afternoon. 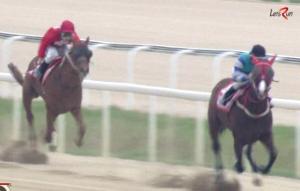 Sent off the odds-on favourite after her dominant display in the Ttukseom Cup and with Joe Fujii back in the saddle, 2012 Grand Prix Stakes winner Gamdonguibada didn’t for a single stride look like getting beaten.

She traded 1st place a couple of times with the young up-and-comer New York Blue but once they were in the home straight, 15 fillies and mares appeared to go backwards while Gamdonguibada strode away from them. The margin on the line was 11 lengths. It could have been 111.

Behind her New York Blue stayed on well for second under Masa Tanaka to make it a Japanese jockey 1-2. Star Bolt also stayed on for 3rd, a place ahead of 170/1 outsider Silver Classic.

Indian Blue was the best of the visitors from Seoul, picking up the last money spot of 5th on another dismal day for the capital contingent. Joy Lucky, so impressive two weeks ago at Seoul, could manage ni better than 15th in running and eventually finished last.

Gamdonguibada moves onto 11 wins from 19 starts, 5 of those wins coming in Stakes races. The Queens’ Tour reconvenes at Busan in October. She is likely to be heavy favourite to add the final leg to her collection too.

It’s yet another Stakes win for the remarkable Kim Young Kwan, fresh from training another filly, Queen’s Blade to win the Derby last month. For Joe Fujii meanwhile, it’s a 5th Korean Stakes win and his 128th overall in the country.