Seoul Race Park’s novelty race on Owners’ Cup day between an athlete, a racehorse and an off-road Sports buggy, ended in an unexpected win for the human. 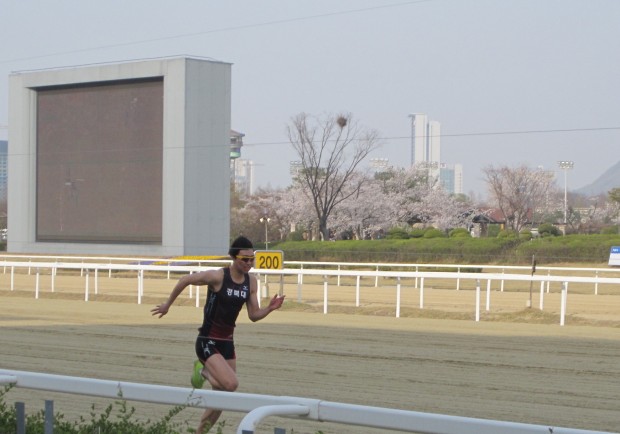 Gyeongbuk University student Lee Jae Ha on his way to beating a horse and a car at Seoul Race Park on Sunday.

Gyongbuk University student Lee Jae Ha, who started the handicap race at the furlong pole, could have had his feet up with a big cigar by the time the slow starting buggy crossed the line in second, trailing a sandstorm in its wake, with the horse back in third. Lee, running on a length of matting that was stretched for 200 metres over the deep sand of the home straight, finished the race in 25.43 seconds.

The buggy completed its 450 metres in 26.32 seconds while the racehorse, an 8-year-old mare called Blessed (The Groom Is Red) took 28.43 seconds to complete 400 metres having been very slow out of the gate. Jockey Lee Gi Hweoi rode the mare who was actually retired from racing in 2010 and has been retrained as a recreational horse so perhaps wasn’t in peak race condition.

Throughout the day, punters had been able to “vote” on which they thought would win with all those correctly picking the human (significantly fewer than those who went for the other two options) being entered into a prize draw.

The event was part of the KRA’s push to get more people into the track and coincided with a special “Beginners and Couples Zone” opening on the first floor of the grandstand. More on that shortly.