Punters will need to stump up an extra 200 won to get into the track from this weekend as the Korea Racing Authority raises the admission fee to the three racecourses for the first time in ten years. The new fee of 1000 won will also apply to all off-track betting facilities. 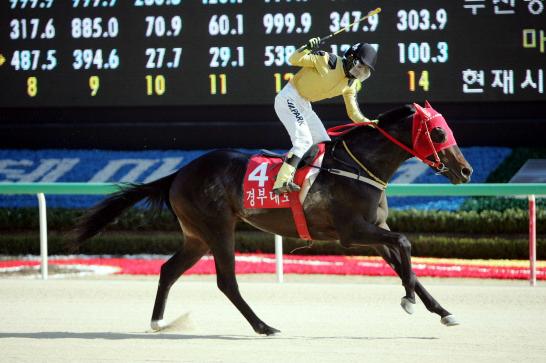 More on that less than Earth-shattering news in a little while but given that it’s still cheaper than a basic subway fare, it is perhaps safe to assume that most punters won’t notice – especially as most use their subway card to get in.

KRA Cup Mile winner Gyeongbudaero (Menifee) makes his first appearance at Busan since running third in the Korean Derby just over a month ago. The colt goes in the second of co-feature races at the southern track on Sunday afternoon against a field of eminently beatable older horses over 2000 metres.

Among them is Peter Wolsley’s old warhorse Khaosan (Sunday Well) and Wolsley saddles another fancy in the earlier co-feature as Secret Whisper (Sea Of Secrets) takes on a very competitive field over 1400 metres.

Up at Seoul there aren’t any stars on show altough both Saturday and Sunday’s feature races are competitive class 1 handicaps.

There’s a chance the monsoon season will begin at some point this weekend so it may be best to pack a raincoat just in case. Here’s what’s happening when and where: