Two of Seoul’s up-and-coming stars were in action this afternoon and both Big Easy and Jilpunggangho further enhanced their ever-growing reputations.

Easy Does It: Going to use that as a headline if Big Easy keeps performing the way he has so far

First up on a beautiful early autumn afternoon in the capital was Big Easy. The three-year old colt was making his second appearance in a class 2 race and, after being sent to the front early by Jung Ki Yong, never looked in any great danger as he led the field home by a length. Big Easy [Agnes Gold – Belmont Grace (Adjudicating)] was winning his seventh race in eight total starts and will be running at class 1 level next time.

Already at class 1 today was Jilpunggangho [Max’s Pal – Spicy Soup (Alphabet Soup)]. It was a close-run thing after early pace-setter Hallyu Star faded away in the home straight. It looked for a while as though former champion mare Lucky Mountain was going to return to the Winner’s Circle for the first time since March, however, Jilpungganho and Choi Bum Hyun just did enough to get up by a nose and score a seventh win from eleven starts for the colt.

Despite both officially being Korean bred and three-years old, neither are eligible for the Classics with both their dams being imported to Korea while in-foal. Except for the Classics, however, that doesn’t matter and we could be in for some exciting performances as both progress to the elite tier of Korean racing.

Today was significant in that there were thirteen races run in a single card for the first time for several years. The additional race being run to make up for the race that was lost due to a tote board failure three weeks ago. Also significant for punters was that for the first time in goodness knows how many weeks, umbrellas weren’t required as the track basked in perfect punting conditions. 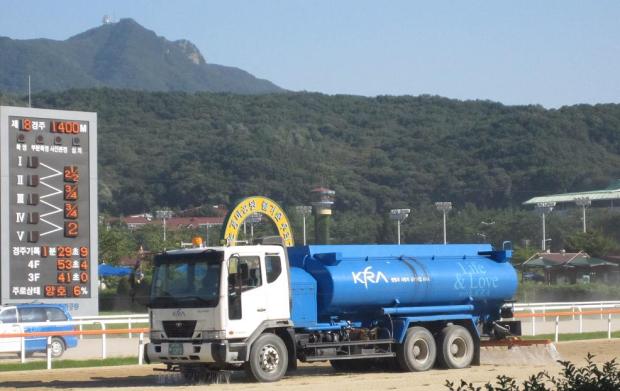 Underemployed for so long, the waterers were back at Seoul today

Tomorrow, racing returns to Seoul with the Dong-a Ilbo Cup while at Busan it is “International Day” with both the Gold Circle and Macao Jockey Club Trophies up for grabs: