Watching the same group of horses week in, week out, it is easy to get distorted views of how good some of those horses really are. This blog has undoubtedly been guilty on more than one occasion of describing a particular performance as “great” when what has actually occurred is that an average horse has beaten sub-standard opposition by an unnecessarily wide margin as its jockey has had a restless whip-hand.

Today, however, it can confidently be written that – in Korean racing terms at least – we witnessed greatness. Forced by the handicapper to drag 62 kilos around ten furlongs of Seoul Race Park, Dongbanui Gangja barely seemed to notice the burden as he glided away from thirteen rivals to secure his eleventh consecutive win. 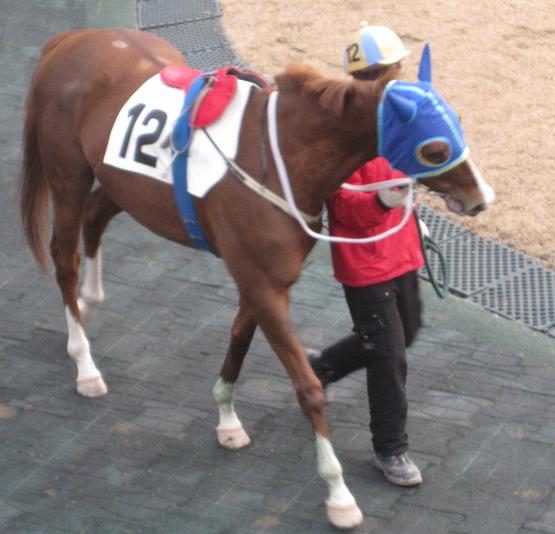 Usually impressive, Dongbanui Gangja looked ungainly in the paddock. Not on the track though.

The horse he wrested the Grand Prix crown from was there and it was Bally Brae who set the early pace under Moon Se Young before Dongbanui Gangja, who had dawdled out of the stalls, cruised to the front as they turned for home. Entering the home-straight, the five-year old, with Choi Beom Hyun at the controls, as usual ran excessively wide. It seemed though that this was just so he could beat his rivals again as, with minimal prompting from Choi, he loped away for a three length victory from Obaek Yechan. Bally Brae ran on bravely for third.

Dongbanui Gangja [Broken Vow – Maremaid (Storm Bird)] is now unbeaten since September 2008 and it is no exaggeration to say that there is not a horse on the peninsula that can at present come close to him. If he stays fit, then a second Owner’s Cup in June looks a formality and at this stage, few would bet against a historic third triumph in the season-ending Grand Prix. There is one three-year old, Tough Win, who is talked of as a potential challenger. It will take a very special horse to beat Dongbanui Gangja.

Earlier in the day, Money Car did his Classic claims no harm as he led from start to finish over the Derby distance of nine furlongs in race 8. Since suffering his only defeat on his racecourse debut, Money Car hasn’t been troubled into a gallop.

Money Car would cruise to the cash

Whether connections point him towards the KRA Cup Mile at Busan or wait for the Derby at Seoul, Money Car [Newsprint – Pinocchio (Big Sur)] is likely to be making a serious drive for Triple Crown honours this year.

Down at Busan, last year’s underachiever as a three-year old started his four-year old career in a similar way. Yeonseung Daero flopped in the 2009 Classics but showed his evident class by scoring big wins late in the season and, with a big year expected of him, was sent off favourite in his first outing of 2010. Indeed, such were the expectations of the colt – and much to his connections’ credit – he was pitched in against foreign-bred runners instead of taking the safer option against fellow Korean-breds. It was not to be, however, as Seonnyang Yongsa scooped the day’s big race by a length from Hardride with Yeonseung Daero only managing fourth.

Doing better than that was Busan new-boy Kunihisa Hirase. The Japanese jockey made his debut on Friday and scored his first win at the track this afternoon taking Classc possible Baekjeom Manjeom to a narrow victory in race 2.