Major King led from gate-to-wire to land the Minister’s Cup as the 2013 Korean Triple Crown wrapped up at Seoul Race Park this afternoon.

He might have fluffy ears, but Major King is now a Classic winner

Korean Derby and Oaks winning filly Speedy First was sent off as the short-priced favourite but she was never in the race and faded in the home straight to finish a tailed-off last.

Third in the Derby on this track in May, the grey Major King was a 9/1 chance at the start and was immediately sent into the lead by jockey Jo Sung Gon. When the expected challenges from Speedy First and Derby-second Unhae failed to materialise, it was left to outsider High Five and Gyeongnam DoMin Ilbo winner Indie Band to apply the pressure.

They didn’t come close. Instead, Major King kicked on for victory, leading his fellow Busan visitors home by 2-lengths on the line.

Major King is by the late Brazilian sire Pico Central, who died earlier this year. The victory is his 6th from 10 career starts to date. For trainer Kim Sang Seok, it was a 3rd Classic winner, having won both the Korean Derby and Oaks in 2008 with Ebony Storm and Jeolho Chance respectively. For jockey Jo Sung Gon, Busan’s current champion, it was a 4th Classic and his 2nd in this race, having previously won it in on Sangseung Ilro in 2009.

As for the favourite, Speedy First returned with no obvious sign of injury, although fellow disappointment Unhae was found to be lame.

So, after Jigeum I Sungan upset the order of things by winning two Classics for Seoul last year, normal service has been resumed this with Busan horses winning all 4 Classics. When the two tracks collide again in the Gyeongnam Governor’s and President’s Cups over the next few weeks, it seems unlikely that this will change.

* There was no fairy-tale return to the track today for Smarty Moonhak (Smarty Jones). The 4-year-old, returning to racing for the first time since successful treatment for tendinitis which had kept him sidelined for 15 months, could only manage 6th in the class 1 race 13.

The event was won by the improving Watts Village (Forestry), who was 2nd in the Korea vs Japan race last month and who will travel to Tokyo for the return leg next month. The old Smarty Moonhak would have made short work of the likes of Watts Village but, while he was 5-lengths behind the winner, he was just 2 lengths adrift of 2nd and the run showed some promise.

* Down at Busan, Darryll Holland was the star of the show for the 2nd time this week. The British jockey notched up 4 winners on Thursday and added another 2 during the short 4-race card this afternoon. His haul included the feature race, where he partnered Peter Wolsley’s Perfect Jilju (Paradise Creek) to a very comfortable victory.

Speedy First romped away with the Korean Derby this afternoon, ending the Triple Crown hopes of pre-race favourite and KRA Cup Mile winner Sting Ray and became the first filly since Sangseung Ilro in 2009 to win the biggest race of all. Her jockey, Joe Fujii became the first foreign rider to win the Derby 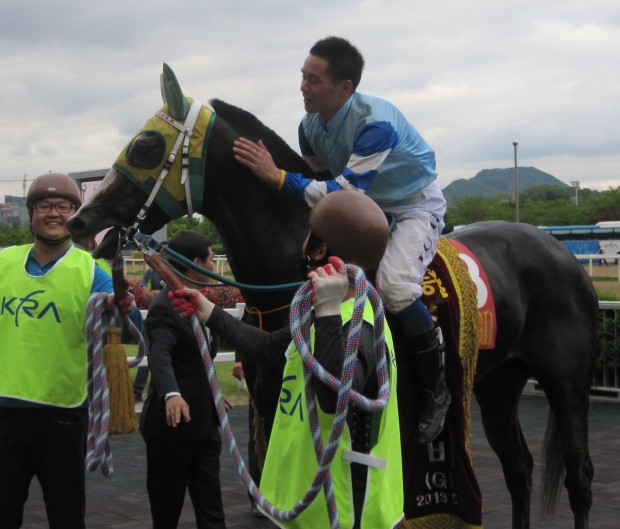 Speedy First (Menifee) came in to the race off 4 consecutive wins and was sent off the 4/1 second favourite behind Sting Ray (Forest Camp), who punters had backed into odds-on.

Outsiders Heungnyong Bisang (Ft.Stockton) and Titan (Creek Cat) made the early pace but the pack was bunched tightly together as they entered the final corner. Turning into the home straight they fanned out across the track but it still looked anyone’s race until Joe Fujii got to work on Speedy First a furlong and a half out. The pair sped away from the rest and never looked back.

The margin of victory on the line was 2 lengths with 47/1 chance Unhae (Ingrandire) finishing 2nd and Major King (Pico Central) 3rd. Sting Ray never looked likely to add the second jewel in the Triple Crown to the first and trailed home 6th.

Aussie trainer Peter Wolsley’s Amell’s Atom (Menifee) picked up some prize money by finishing 5th, however, there was disappointment for British jockey Darryll Holland who ended in 12th place on Fantastic Jazz (Menifee). Lee Shin Young, the first female trainer to have a runner in the Derby, saw both her entrants struggle with Titan in 13th and Awesome Tiger (Exploit) disqualified.

For jockey Joe Fujii, it was the 60th winner of what has been a quite remarkable 11 months in Korea. The 29-year old won the Grand Prix Stakes on another filly, Gamdonguibada, last December becoming the first foreign jockey to do so and today he completed a unique double by achieving the distinction of being the first foreigner to win the Derby. He has now won 2 out Korea’s 3 richest races.

Fujii’s license was recently extended until September and his reputation among punters is such that he is well on the way to taking on Toshio Uchida’s title of the most popular Japanese man in Korea.

Speedy First’s win also firmly cemented Busan trainer Kim Young Kwan as the nation’s best. This was his 2nd Derby, following Sangseung Ilro’s 2009 triumph. In more general terms, Busan horses once again got the better of their Seoul counterparts in a big race.

Before the Derby, punters were treated to the charms of Sistar. currently K-Pop’s top girl group (Pic: @zstokes)

So just a few hours after a Triple Crown hope went down in the US in the shape of Orb, so Sting Ray’s hopes of emulating J.S.Hold in Korea have gone. Never mind, today we saw a new star emerge on to the scene.

Speedy First will automatically become favourite for the Korean Oaks, which will be held at Busan in August and then if all goes well, we should see her back at Seoul in October when the cream of this year’s generation reconvene for the Minister’s Cup, the final leg of the Triple Crown. There is a lot to look forward to.