The 2nd Korea Autumn Racing Carnival took place at Seoul Racecourse over the weekend. There’s no need to re-tell what happened here as pleasingly, the race has received plenty of international coverage, save to say that Yutaka Take guided Graceful Leap to victory in the Sprint while in the Cup, London Town downed last year’s winner Chrysolite to make it a Japanese one-two. 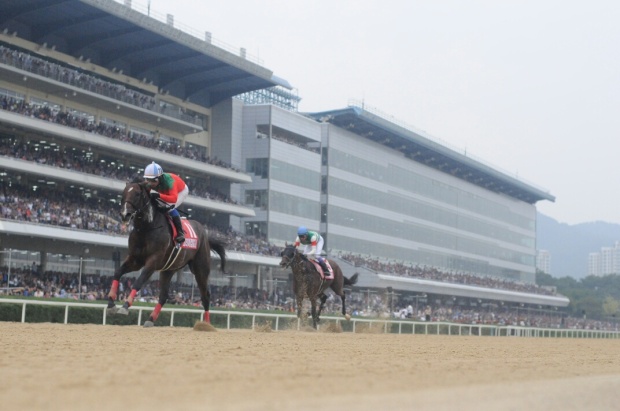 On the track, London Town was simply sensational. He came in having broken the 1700M track record at Sapporo less than a month ago and absolutely dominated the Cup, taking well over a second off the Seoul 1800M track record in the process. Last year’s winner Chrysolite had absolutely no answer. That said, the Japanese pair finished a full 17-lengths clear of Papa Shot in 3rd and demonstrated just how good JRA horses, even those not quite at the very top, really are. 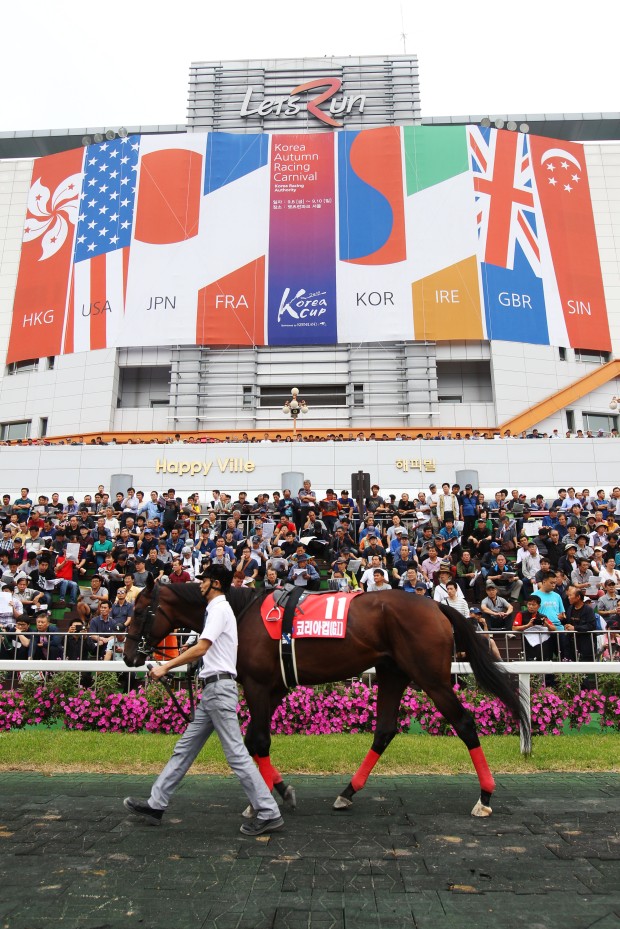 Graceful Leap’s Sprint win was naturally less emphatic but it was still convincing. Korean Triple Crown winner Power Blade ran a huge race in 2nd place and while he was never likely to be as inconvenienced as some others by the wide draw, one can’t help but wonder whether he would have got much closer had he been able to begin from a more favourable gate. Doraonpogyeongseon ran on very nicely too proving himself a real racehorse. In the Cup for Korea, while Champ Line put in a good run, ultimately it was all about Triple Nine as it so often is. He and Power Blade have turned into such good ambassadors for Korean racing that how to replace them when their powers begin to wane is starting to be an issue. But of course, that’s part of what makes racing so fascinating. 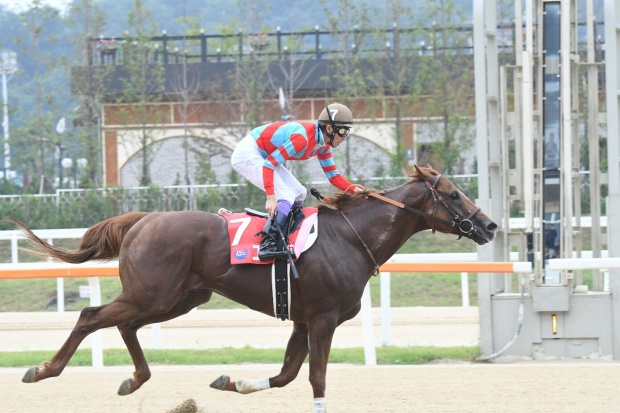 Graceful Leap and Yutaka Take cross the line in the Sprint (Pic: KRA)

The performances of the two American-trained horses was one of the Carnical’s highlights. In the Sprint, The Truth Or Else was drawn in gate 1 but jockey Dylan Davis was forced off the rail and went wide to find a run. He closed very strongly for 4th place and a tidy prize that fully vindicated the decision of his enterprising connections to bring him. Trainer Kenny McPeek was a boisterous presence throughout the week and led his charge in the parade ring himself prior to the race. Picking up an even tidier prize was Papa Shot, 3rd in the Cup despite having to recover from some interference four furlongs out. 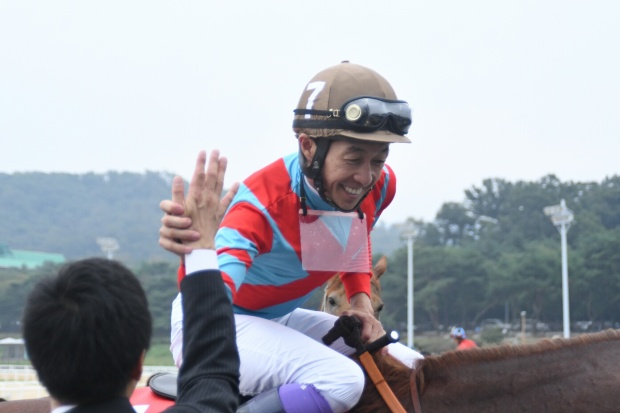 McPeek estimated that The Truth Or Else would be ranked around 20th in terms of sprinters in the United States and one wonders what one ranked even higher could achieve especially as the nature of the Sprint makes it by no means a race that JRA horses will automatically dominate. As for Papa Shot, he’s a very solid horse but no superstar but looks the kind of horse you’d love to own. Bill Nader, representing the man who does own him, Barry K. Schwartz, made the point before the race that Papa Shot had run at all sorts of tracks in the US and almost always gave a good account of himself. Those tough and grinding types can find their reward on the Seoul sand and while at 1800M, it would take something special to beat a JRA horse or a Hong Kong galloper that gets on with the track, a really top American horse might just be able to do it.

One disappointing note was the performances of the Hong Kong horses. With the races being beamed live to a busy Sha Tin, it was a pity that neither Lucky Year nor Circuit Land made any impact in the Sprint and Cup respectively. Circuit Land perhaps had some excuses having been prominent early but was then forced to check with four furlongs to go as a result of a poorly judged manouevre by Lee Chan Ho on Dynamic Jilju. However, Papa Shot was also disadvantaged by that incident and overcame it and jockey Nash Rawiller admitted his mount never really looked to be in the hunt. Meanwhile, Lucky Year didn’t get the start he needed and once the sand started flying, his race was over.

However, Super Jockey won the Sprint last year and both Circuit Land and Lucky Year appeared to pull up fine so hopefully the races will still prove attractive to Hong Kong connections in 2018. 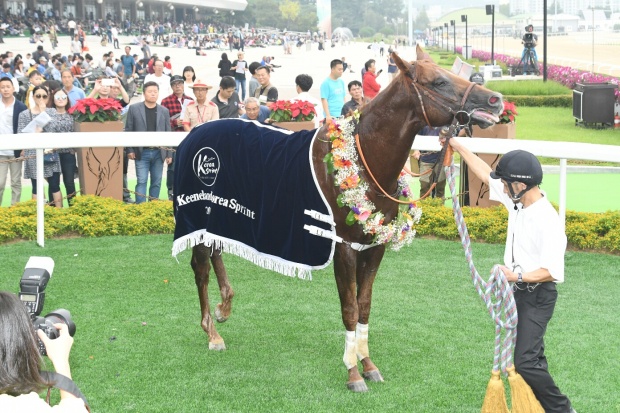 Promising young Singapore-based trainer James Peters brought across Wimbledon for the China Horse Club. After showing prominently early on under Daniel Moor, he faded in the closing stages but reportedly pulled up fine. 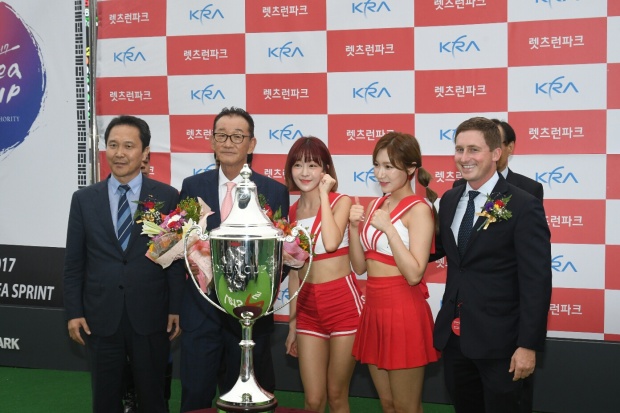 One thing that is evident is that despite being in just its second year, the Carnival is already establishing itself as an event in its own right to the extent that what happens in the actual races becomes almost secondary. Everyone knows about the track surface by now – it is what it is – and the atmosphere surrounding the whole week was extremely positive.  The travelling international press corps was larger than last year and within Korea, cable network KBS N Sports broadcast highlights of the races in a 75 minute show at 10pm on the day of the race and then repeated it in primetime at 8:20pm on Monday night. There is a feelgood environment about the event that is perhaps only possible with a relatively young race, enthusiastic connections and still a sense of the huge potential that could be realised in future years. That Keeneland go out on a limb to sponsor the race right on the very eve of one of their biggest and most important sales of the year, perhaps demonstrates this.

On to attendance and turnover.  Attendance was actually down on last year but there is a good reason for that. In 2016, the Korean “Chuseok” Thanksgiving holiday – one of only two weekends of the year with no racing – immediately followed the Carnival. Attendance always shows a spike prior to dark weeks as there is no opportunity for a legal punt for the next 12 days. As it was 39,910 paid ($2 each) to come through the gates at Seoul Racecourse on Sunday compared with in excess of 44,000 last year.

Wagering turnover on the day was also down but interestingly, both Cup and Sprint showed slight increases. The Sprint handled 4.37 Billion Won in 2016 to 4.39 Billion Won this time while the Cup went from 4.8 Billion Won last year to 5.12 Billion Won in 2017 and followed the regular pattern of turnover getting bigger as the day progresses (for obvious reasons, turnover on the final race of the day is always the biggest). Local punters find it very hard to handicap international races due to the form being hard to assess but with more familiarity, it appears Korean racegoers are now prepared to have a go.

Internationally, both races were simulcasted by the Hong Kong Jockey Club and by Sky Racing in Australia. The Singapore Turf Club took the Sprint as did Malaysia while the entire day was available for betting at the Macau Jockey Club. In the USA, Sky Racing World distributed every race to  ADW’s. TVG Network broadcast both Sprint and Cup. Overall international turnover slightly exceeded domestic turnover (Hong Kong obviously accounting for the vast majority). Dubai Racing TV also screened both big races live. 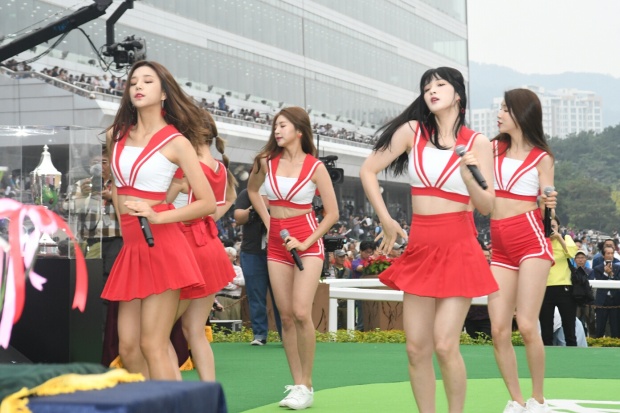 This is Korea. There needs to be progress year on year. Local assessments will probably focus on the dominance of the Japanese runners and that one fewer country was represented than in its inaugural year (the USA joined but the UK and Dubai didn’t send any runners this time). However, that should be countered by the sheer quality of London Town’s performance and also by the positive showing by the US runners. There’s a year to go until the next Carnival. The Korea Cup & Sprint have not yet come of age, but they are very much on the right course.