Last Saturday afternoon at Seoul, something happened that would have been unthinkable just a few years ago. Race 7, an otherwise unremarkable domestic class 4 allowance race, was won by jockey Yoo Mi Ra. The second place horse was ridden by Kim Hae Sun and Ahn Hyo Ri was on the third. Female jockeys had swept the placings for the first time ever in Korea.

It is questionable what would be the more unlikely: that by 2013, South Korea would have a female President or that women would be performing so strongly in the traditionally ultra male dominated world of Korean horse racing.

Korea’s first female jockey, Lee Ok Rae in 1975. At the time, the horses were not thoroughbreds

Park Geun Hye was elected the nation’s first female President last month, however, somewhat surprisingly, you have to go back to the now long-gone Ttukseom Racecourse on the north bank of the Han River and to the Spring of 1975 when 21-year-old Lee Ok Rae became the first woman to be granted a jockey license in Korea.

South Korea was, at the time, under the authoritarian rule of President Park Chung Hee – father of the new President Park Geun Hye – who had recently survived the second of three assassination attempts – this one had resulted in the death of his wife. Then, as now, racing held a near monopoly on gambling and Ttukseom was full to bursting on each race-day.

Lee Ok Rae graduated in the same class as Bae Dae Sun and Ji Yong Cheol, who would go on to become two of the top riders of their generation and today are among the country’s most successful trainers. Assigned to trainer Kwon In Deok, on March 17 that year, Lee rode in her first race.

In true storybook fashion it was a winning debut as in race 4 that day, she partnered horse number 1, “Kansas” to victory over five and a half furlongs.

Lee continued to establish herself over the coming months, however, in August that year, disaster struck in the shape of a fall in which she sustained injuries that would end her career. She retired just six months after her first ride with seven wins from forty-eight starts. No Korean woman would ride in a race for the next quarter of a century.

By the time they did, Park Chung Hee had been dead for two decades and his once bitter enemy Kim Dae Jung was now President of South Korea. Seoul had hosted the Olympic games in 1988 and Ttukkseom Racecourse was closed as the huge new track at Gwacheon opened, having been constructed on the site of the Olympic Equestrian events. At the turn of the millennium, the KRA made an effort to get more women into the sport.

In 2001, two jockeys were granted licenses, Lee Keum Joo and Lee Shin Young. They were followed a year later by Lee Ae Li and Park Jin Hee. Lee Keum Joo and Lee Ae Li are these days occasional riders, the former having only ridden sporadically since her marriage while the latter, despite retaining her popularity with punters with her “Ae Li Gongju” (Princess Ae Li) image complete with pink silks and boots, has only ridden 50 times in the past year.

Of Lee Shin Young and Park Jin Hee, we will return to shortly.

Tragedy struck the next intake. Granted a license in 2005, Lee Myoung Hwa took her own life shortly afterward. She was found to have been suffering from depression that is believed to have been exacerbated by worries about constant reducing to make weight. A year later, newly licensed Kim Seo Jin quit before her first ride.

In 2006, female jockeys received mainstream publicity in Korea with the release of the movie “Gaksoltang” (Lump Sugar). Starring actress Im Su Jeong as a jockey and largely shot at Seoul Race Park, the movie is, for its acting and focus on the horse as a star, arguably one of the best racing movies ever produced (Click here to see trailer.). KBS Television produced a one-off documentary about Lee Ae Li to coincide with the film’s release.

Meanwhile, down on Jeju Island Kim Joo Hee and Na Yu Na became the first women to receive jockey licenses for the pony racing there. Kim was formerly a promising athlete while Na was an Aerobics instructor. Both have become prolific winners with Na becoming the first woman to reach first 100 – and now 200 – career winners as well as landing the prestigious KRA Jeju Cup.

Na and Kim have found it easier to compete riding the Jeju ponies than their counterparts have on the thoroughbreds on the mainland and in a short time have risen to first and third in the all-time female winners list. They’ve been joined in recent years by Kim Da Young who is also winning regularly.

Back in Seoul, Yoo Mi Ra qualified in 2008. She along with 2010 graduate Park Jong Hyun have struggled to gain much of a foothold but are still working hard although Yoo did make all to win that historic race on Saturday.

2010, however, saw another desperately sad turn of events, one that shook everybody involved in racing here. Having begun racing at Seoul in the same graduation class as Lee Ae Li, Park Jin Hee moved to the new track at Busan when it opened in 2005.

She started riding winners and became well established but in 2009 her form began to dip. One Friday in March 2010, she failed to appear for her rides. After the alarm was raised, she was found dead in her apartment. She was 28. 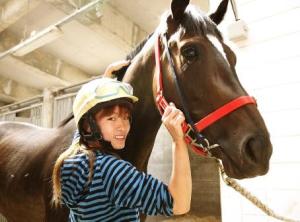 Park Jin Hee left behind a detailed suicide note, outlining what she believed to be unfair treatment and bullying in racing in general and that she in particular had suffered, principally from trainers. The recriminations were bitter with the jockeys and trainers unions engaging in furious rows.

Nearly three years on and for all that Busan is a much more progressive track than Seoul in terms of its raceday operation, its rules and its openness to foreigners, no Korean woman has been licensed at the track since.

Later in 2010, the Korean movie industry once more turned its attention to female jockeys as Kim Tae Hee starred in “Grand Prix” Unlike Gaksoltang, however, this was not a movie to live long in the memory.

At Seoul Lee Shin Young, who qualified as a jockey nine years earlier, sat and passed the exam needed to gain a trainers’ license. She continued riding for nearly a year until, with 90 winners to her name, a barn became vacant. On July 1, 2011 and still only 31 years old, Lee Shin Young surrendered her jockey license and became Korea’s first female trainer. 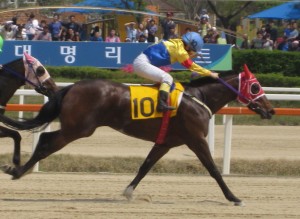 Kim Hae Sun is winning on the track

She has started well, saddling 35 winners including one in a listed race.

Her barn now has 24 horses in it, including Feel So Good, the first Korean bred horse to win a race in the US and she is thought of as one of the most promising talents on the backstretch. As a jockey she had an aggressive style which landed her in the stewards room far too often.

It is an attitude has served her well in an environment where many people were hoping for her failure.

On the track, Lee Shin Young’s protegé is Kim Hae Sun who has 80 winners to her name. A product of the Seoul Jockey Academy, which has started to churn out a series of promising young riders who have been putting their elders to shame, Kim along with 2011 graduate Lee Ah Na and 2012’s Ahn Hyo Ri, have every chance of making it to the very top.

** There have also been three Japanese women riding in Korea and all of them have been successful. Mai Beppu rode at Seoul in 2011 while Hitomi Miyahsita rode plenty of winners at Busan in 2009/2010. Akane Yamamoto also had a successful speel at Busan in 2011/2012. Unfortunately, Akane suffered a serious injury in a paddock accident in Japan last year.

*** This post is an updated version of one published on this blog back in 2009 titled “Korean Racing Girls”. Much of the information for that original post was sourced from the excellent Korean language blog “Enjoy Horse Racing” whcih is still going strong.