The lot of a foreign jockey here is not an easy one. And it’s especially not easy if there are 3 other foreign jockeys ahead of you when you arrive.

However, one French jockey is trying to overcome those odds. Jerome Lermyte made his Korean debut at the beginning of November last year.

While on first inspection his bottom-line figures of 2 wins since then do not seem especially impressive, new light is shed on them when it is considered that those 2 wins have come from just 22 rides and that he’s found the money with 10 of those.

The 24-year-old Lermyte started his apprenticeship in France in 2006, winning the apprentice championship the following year.

In Europe, Lermyte has ridden in Germany, Spain and Switzerland as well as riding 20 winners in a 6-month stint in Macau and 15 during 3 months in Qatar.

In total he has over 300 career winners, 20 of them coming in group or listed races.

Lermyte’s first Korean winner came for Peter Wolsley at the end of December but it is his 2nd, which was last Friday at Busan that may be more significant. That win came on the first Korean runner for South African trainer Bart Rice who Lermyte is set to act as jockey for.

It was a good ride, with the French rider getting the better of Darryll Holland in a tight finish. He’s going to need plenty more of those to help the Rice stable get established. For both jockey and trainer, February is looking like an important month.

Bart Rice, who arrived in Korea at the end of last autumn, finally sent out a runner at Busan Race Park on Friday afternoon and he fond immediate success as that runner, Gyeongnam Sinhwa, won race 3.

The 37-year-old, who is the 3rd foreign trainer to be licensed in Korea, has put together a string of 22 horses since his arrival although – no fault of the trainer – they appear to be in varying states of race-readiness.

US import Gyeongnam Sinhwa (Keyed Entry) was himself making his racecourse debut and after being sent off at odds of 8/1, landed victory by a length under French jockey Jerome Lermyte, who was himself scoring only his 2nd win in Korea.

Rice’s other 2 runners on Friday were unplaced but his 33.3% strike rate will stand for some time. He doesn’t have any entires on Sunday and racing takes a break next weekend for the Lunar New Year holiday.

Ever wanted a pair of Joe Fujii’s goggles? No? Well, you should and now you can. Busan’s foreign jockeys have teamed up with Korean racing magazine “Seoul Gyongma” for their Christmas auction.

Fujii has donated the saddle he used when riding Gamdonguibada to victory in last year’s Grand Prix Stakes as well as Road To Prince’s saddlecloth.

The other foreign jockeys currently riding at the track; Darryll Holland, Masa Tanaka and Jerome Lermyte all supplied several pairs of signed goggles. 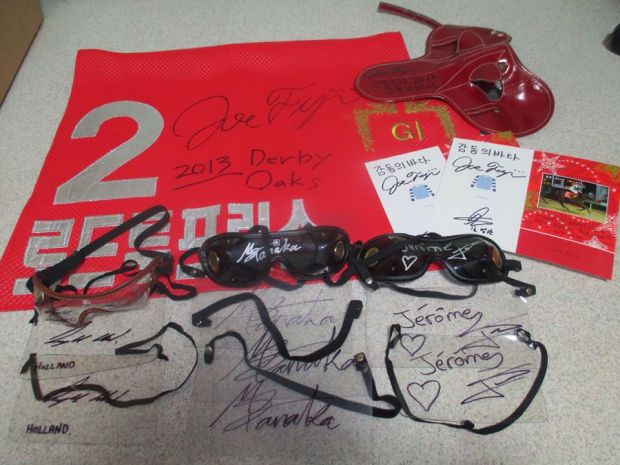 Details of the auction will be in this weekend’s editions of “Seoul Gyongma” with all proceeds to charity.

There’s another addition to the foreign jockey ranks at Busan as French rider Jerome Lermyte makes his Korean debut on Friday.

Jerome Lermyte gets his Korean pose on (Pic: KRA)

The 24-year-old Lermyte may be young but he’s certainly well-travelled.

He started as an apprentice in France in 2005 and in his homeland he’s won several decent races including three “Tierce Cups”, the Derby de Lyon, the Grand Prix De Lyon and the Derby D’Angers.

Lermyte’s career also took him to Germany, Mauritius, the USA, Qatar and Kuwait before spending 2 years in Macau. Earlier this year, he had a stint riding in Western Australia.

Lermyte, who has a racing weight of 51kg, will have his first ride on Lethal Yeowang in Race 6 on Friday.