He’s a Ttukseom Cup winner and is the most successful runner by his late sire The Groom Is Red. And today, Triple Seven was back in the winner’s circle at Seoul Race Park after scoring an upset win in the afternoon’s feature handicap.

Starting as a 14/1 outsider behind favourite High Point, currently ranked behind only Ace Galloper in terms of domestic bred horses in the capital, Triple Seven was always close to the front as the field set a very slow pace in the 1900 metre race.

While Suseong TX, Money Teukgeup and Cheot Insang all took part in a closely fought finish, High Point was nowhere to be seen and eventually finished last but one as Triple Seven took victory by a length and a half.

The victory took Triple Seven past the One Billion Won prize money mark and was his thirteenth win from thirty-five career starts. It was his first start since September last year and the extended break appears to have him back looking something like the horse he was two years ago. He’ll not be in the Ttukseom Cup this year – it’s now for fillies and mares only – but whatever race he starts next, he won’t be 14/1 again.

In other races, it was a big day for apprentice jockey Lee Hyeok. The 25-year-old (these days Korean jockeys have to complete their education and then study full-time at the KRA jockey academy before they can get a license – the majority of new jockeys are in their mid-20’s) landed the first double of his career to get his fourth and fifth winners since debuting last summer.

Later in the day, he suffered his first in-race fall as Kwaegamhaengjin appeared to break down on the second corner in race 9. Lee was sent tumbling and was narrowly missed by horses coming through behind him. Remarkably after being treated on the track for five minutes, he was able to walk away. 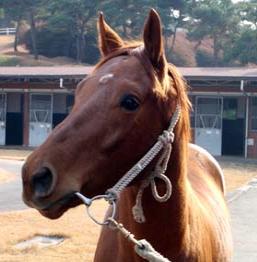 Kwaegamhaengjin [Newsprint-Yeonseung Kwaegam (Real Quiet)] sadly was not so lucky. The four-year-old was starting for the twelfth time and had two wins and three second places to his name. Those two wins had come in his last three outings and he was looking set for a successful season.

A few years ago, a horse would break down and the vet would be nowhere to be seen. In some ways it is a sign of how far racing here has come that today the horse was being attended to as quickly as the fallen jockey; just seconds after it happened.

The most difficult moment in racing has been made as humane and dignified as it has been anywhere. Nevertheless, every time it happens is once too often. The track may have had nothing to do with Kwaegamhaengjin’s fate, but the breakdown rate is still too high. It is surely time to get rid of this sand.

Racing returns to Seoul on Sunday with Dongbanui Gangja and Kkakjaengi fighting it out in the feature race. Down at Busan, it is the first Stakes race of the season and Yeonseung Daero is set to be favourite for the Busan Ilbo Cup.