The Korean racing community was one of several around the world to be saddened to learn of the death of jockey Fausto Durso in Brazil on Saturday.

Durso first came to Korea to ride in the Seoul International Jockey Challenge in August 2013, winning the feature race of the event, the YTN Cup, on Choichoro. He immediately applied for a short-term license, which was approved. He returned to Korea in October that year and rode five more winners during a three-month stay over the winter of 2013-2014.

Having turned professional aged 18 and ridden 700 winners in his native Brazil, Fausto Durso moved to Asia and competed in the 2013 Jockey Challenge as a representative of the Macau Jockey Club.

It was in that jurisdiction where he had his biggest successes, riding 600 winners and winning many of the biggest races as well as twice being crowned champion jockey. Durso also had stints in Dubai, Malaysia and most recently, in Mauritius.

Like many foreign riders who come to Seoul, Durso didn’t get as many opportunities as he would have liked but regularly made the most of what he had to work with, achieving a very high place percentage over his 165 rides.

Fausto Durso is remembered by those who knew him here as being friendly, hard-working and a very talented jockey.

According to local media reports, Durso died following an altercation outside his parents’ house in Senador Firmino. He was 40 years old. Thoughts are with his family and friends.

Fausto Durso enjoyed a good start to his time in Korea, riding a winner, a 2nd and a 3rd at Seoul Race Park this afternoon. 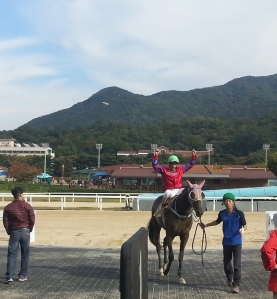 The Brazilian Jockey was in the Winner’s Circle on his only previous visit to Seoul, when he won the YTN Cup while taking part in the International Jockey Challenge in August this year.

It didn’t take him long to get back in there as his first ride today ended in a well-timed victory on 24/1 outsider Argosseon in race 6.

One race later, Durso managed 3rd on the much-better fancied Lion Galloper and was then just beaten into 2nd in race 11 on Sufficient Evidence.

Seoul’s other foreign jockey, Ikuyasu Kurakane, had another typically successful day. The Japanese rider scored 2 wins to take him up to the 50 mark for the year.

Racing returns to Seoul tomorrow when the Gyeonggi Governor’s Cup, the track’s premier race for fillies and mares, will be the highlight. While Kurakane doesn’t have a ride, Durso will be reunited with Choichoro, who he won that YTN Cup on. 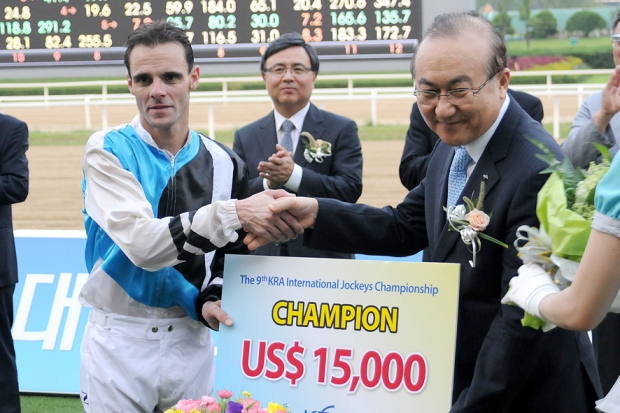 “King” Callow won the Macau Jockey Club Trophy yesterday and added the Selangor Turf Club Trophy to his haul this afternoon to amass 51 points and take home the $15,000 bonus.

He looked set to add a third victory as Dongseo Daeryuk had the lead in the final furlong of the YTN Cup, until Choichoro (Concept Win), under Brazilian jockey Fausto Durso came through on the outside to snatch the win.

Fausto Durso wins the YTN Cup on Choichoro ahead of Noel Callow but the Australian came out on top overall (Pic: Ross Holburt)

With his YTN win, Fausto Durso finished 2nd overall in the challenge on 35 points while Moon Se Young was 3rd with 25.