It’s been a rocky road to the first three-year-old Classic of the season but against the backdrop of an existential threat to Korean racing with seemingly little prospect of either online or offline betting arriving any time soon, the KRA Cup Classic will finally be run at Busan this afternoon. There is a 5 race card at Busan with the big race at 3.30pm while at Seoul there are 14 races from 10.25 to 18.00. 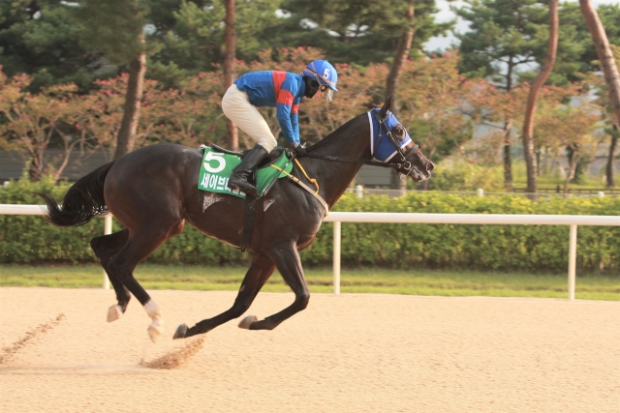 Fourteen horses will enter the gate but champion juvenile and one time Triple Crown favourite Roller Blade won’t be among them, after a 10,000/1 type administrative oversight meant he hadn’t fulfilled the qualification criteria.

It hasn’t been the smoothest of build-ups for another leading candidate Save The World either, with his trainer having sadly passed away in March.

Save The World does run and is set to be among the favourites as is Choegang Team who has only been beaten by Roller Blade in his five starts to date and looks to be the pick of the raiders from Seoul along with so far unbeaten Roan Tough Man. Gyeongnam Do Min Cup winner Doctor Carson is another in a race made all the more fascinating for the lengthy absence of racing at a time when the three-year-olds would have been coming into their own. Here are all the previews – scroll down for the KRA Cup Mile (Busan race 5):

A tough race to kick proceedings off on Sunday with a lack of exposed form for punters to assess. (8) SHINY FIRE is the top elect based on a reasonable trial performance in April combined with what she showed at her first couple of starts. The Midshipman filly has shown early speed in her racing and should work forward early on. Expect it to be a slog up the home straight but we think she will be one of them left in the finish. (2) KKAEUCHIM can run into the money based on some reasonable performances before the hiatus. The four-year-old is yet to place from nine starts but this race has a severe lack of form. (1) SHADOW QUEEN has been included on the basis of a nice trial in recent times. She has had the one start where she showed very little but the trial was good and if she collects a cheque it would not surprise. (3) WOL YEONG I is another that trialed well but needs to bring it to race day.

Not the strongest of maidens here. (1) HAMYANG SANGRIM sports two 3rd place finishes among seven starts so far and is at least capable of consistently running a competitive time. She didn’t catch the eye in an April trial but if Ha Jung-hun can work her to the front from the inside gate then she has a good chance of scoring here. (4) GEUMA MAJESTY is the only one of the field who has recorded a runner-up finish, something she achieved at this distance. She returned in February after nine months out to run a decent 4th, again over this distance and can go well first up once more. Neither (3) GAJA PLAN nor (9) OKAY JJANG offered much in their limited experience so far but both showed a bit more promise, the former especially, in recent trials and can improve today. That’s true too for (10) MAY BLUE, who does at least have a 4th place to her name and will be expected to work forward to the front from the outside gate.

The Korean-bred three-year-old fillies line up in the third over 1200m. (3) RAPIDO ARES looks the one to beat based on a very solid debut performance. The Lion Metal filly finished third behind Lucky Myeongho on that occasion when hitting the line strongly. The step out to the 1200m looks ideal for her and she comes off a reasonable trial. (2) SAENAE CHOICE must be considered as a winning chance. She is a speedy type who has stuck on in her races honestly to date and with fresh legs she is one to keep safe in your selections. (5) HANIL MOA has been settling further back at her past couple of starts. She will be hitting the line strong late and looks a place chance at best. (7) GLOBAL SUN is on the two week back up after feeling the pinch late in her recent run. She should strip fitter for the run and looks capable of collecting a cheque.

Maiden fillies only tackling the 1200M. (1) DREAM GIRLS showed progress over three starts prior to the shutdown culminating in a 2nd place on February 22nd. All of them were at 1000M and all were in decent times. She confirmed her ability when trialing well behind Blessing Road in May and stepping up to 1200M for the first time, she can win and in a race with no early speed, can probably lead gate to wire. The form for the rest is patchy, to put it mildly. (7) ANYANG HORANGI has never finished any better than 4th but has posted some good times, albeit in rain-assisted tracks. She trialed up well – also in the wet – three weeks ago and can be competitive here. (6) WONDER PLACE too has been consistent if unspectacular and she too performed competently in her trial. (9) HARUON got sent out only slightly better than even-money when she raced at this distance in February. Punters must have seen something in her prior run when she clocked a useful time over the 1000M. She ended up finishing 5th but that form is enough to bring her firmly into placing contention today.

A compact field of eight will go over the 1400m in the fifth event. (4) YEOLRIN MUN was a good last start winner over the 1200m back in February. The Any Given Saturday colt has had just the five runs for the win and two minors. The trial in April was average but he lined up against some handy types. (2) STREET GANGJA was a last start winner on debut. The Hongji gelding won by a clear margin but clocked a very slow time for the 1200m. The recent trial was good and with some improvement has to be considered a winning chance. (6) MISSILE CANDY is consistently around the mark and finds an assignment where the entire can collect some prizemoney. He comes off a last start fifth behind Gold Blue Magic when shortening stride in the final stages over 1400m. The drop back to the six furlongs suits and his trial was good. (1) RESKA looks next best after lining up in a tougher assignment last start when finishing fifth. Expect the Big Brown filly to sit behind the speed and motor late.

(2) CHROME MAGIC had started to lose his way somewhat in his last three outings prior to the shutdown so it may be that the enforced time off has done him some good. It certainly looked that way when he trialed up at the beginning of June, running 2nd in a fast heat to the class 1 Baengmunbaekdap. Moon Se-young is an intriguing booking aboard and he can win. (1) WONDERFUL COUNTRY and (8) DAEHO JILJU both returned to action two weeks ago, both END_OF_DOCUMENT_TOKEN_TO_BE_REPLACED