Saturday racing is at Seoul with 12 races from 10.45 to 18.00. Potential racegoers should be aware that an external Union is planning to enter the racecourse to demonstrate at some stage so it may not be the most pleasant of days to attend: 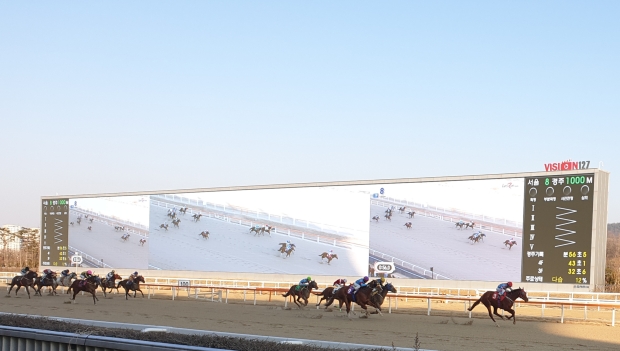 The first on Saturday will see a field of twelve maidens go over the short course. In a race that lacks form, (1) SIBERIA looks ready to strike at her first start after a solid trial. The Chapel Royal filly settled midfield before working through the line nicely when untouched by Kim Jeong-jun who rides her for her debut. (2) BEST PARTY was well beaten at her firs couple of starts as a two-year-old but has trialled reasonably since. The chestnut took up the running in the trial before going down a length. Look for improvement here. (5) SPRING COME lines up for his third start after being well beaten at his first couple of attempts. His times have been good enough to suggest he can run into the money. (9) BAEKDUWA HALLA ran a fair trial when qualifying for her first run. The Old Fashioned filly was slightly green but ran through the line reasonably.

Tricky little maiden this with no standouts but plenty having shown a bit of ability. Others have been faster over the distance than (4) ARARIYO but the colt has a 3rd and a 2nd from three starts so far. He was well back behind a good winner last time but has shown he knows what to do and from a good draw can lead from the start. (11) SHINY FIRE showed improvement when runner-up on what was her second career start. She led until the closing stages that day and will look to do similar here. She comes in after three months off and if she can overcome the wide draw, will be a danger. Moon Se Young climbs aboard (12) NONGBUI SUCHEAHWA. The filly has never been worse than 5th in five outings to date and should at least continue that run here. (6) HANSEN CHOICE and (9) NEVER WALK ALONE are others in the hunt.

The three-year-old Korean-bred gallopers line up in the third all looking for their first win. (6) HEUNG CAPTAIN was good on debut when finishing 2nd behind Dream Po Re over the 1000M. The son of Colors Flying bounced out of the gates well and found the fence early on. Expect him to work forward once again with limited speed engaged. (3) RAON HIGH is another on speed galloper who comes out of a three-year-old event where she finished 3rd. She was beaten 2.5L when clocking a time that should see her be competitive in this event. She placed in a juvenile event prior to her last run. (11) BARBELL looks one that can improve on his first couple of starts. The Old Fashioned gelding is likely to settle midfield or worse but can run into the money based on previous efforts. (2) SOJUNGHAN GOLDEN made up ground in the straight when debuting in a juvenile event in December. The Cielo Gold gelding gave the impression he will appreciate the extra furlong and perhaps longer in future starts.

(2) DREAM PO RE was an impressive winner on debut on January 5th. The Shackleford colt is up in both class and distance today but the manner of his win suggests he should be firmly in the frame again. It took (4) DONGJJOK GLORY a few more goes to figure things out, but he was a very nice winner last month, coming from off the pace to score over 1300M. He too is up in class and is a contender. (11) WONDER K is yet to win but has run 2nd in his latest two. That has resulted in him being bumped up to this level, but Moon Se Young’s presence aboard means he is sure to be backed. Completing the list of those up in class is (9) STRONG RED, who made all to see off a somewhat limited field over 1300M in December. All four of those have claims here but if you prefer one with experience at this class then (5) DIA KEY is the one to go for. Having got his maiden win at 1000M in December, he stepped up to this level and ran 3rd, beating a couple of these, at 1200M a month ago.

A field of maidens will go over the two turns in the fifth where there is a lack of form engaged. That means the form of (2) A ONE KING looks good enough to take this race. The Exploit four-year-old ran on strong over this distance last time out when finishing 4th behind Colors De Lago. His times have been far better than his rivals engaged. (9) WONDERFUL ORANGE has been hitting the line well of late when the race has

been all but over. She stretches out to the 1700M for the first time today which should assist her chances. (1) MILKY SHERRY managed to finish 3rd in similar company last time out over 130M. The filly steps back up to the 1700M again where she finished 5th two starts back. (3) P N S ROYAL has improved with each run and can run into some minor money. Lee Hae-dong will need to use gate three well to ensure she keeps in touch with the leading division.

(6) COLORS DE LAGO didn’t show an awful lot in her first few races but since being stepped up to this trip, she’s recorded a 2nd and her maiden win. Accordingly, she is up in class but, while she is never going to be a superstar, she won’t need to improve too much to win this. There’s not much speed in this race but she will come through late and is the one to beat. (1) WIND SKY is another who has proven adept at this distance. He won at it back in October and then ran 3rd last start a month ago. From the inside gate, he will probably be close to the early lead and has claims. (12) MANSE and (3) CHOEGANG PARTY came home 5th and 6th respectively when they raced each other at class and distance on January 4th and both can credibly aim to get closer today. (5) SOUTHERN MAN struggled in better company than this last start but has own at the distance and can be considered.

A field of twelve will face the starter in the seventh where there appears a lack of early speed engaged. (6) BRAVO GWACHEON is one of the likely pacemakers who can take advantage of the lack of early pace. Expect the three-year-old to work forward early on and run through the line strong as we witnessed last start when he broke maiden status. This is his first attempt over the 1700M with connections confident he can get the middle distance after just three starts. (8) GAZUA has put a couple of reasonable runs together. The Kim Hag-soo trained colt settled closer to the speed last start and finished off well to finish 3rd behind Tap Music. (5) MAPAEBONG has been stuck in this grade for quite some time but appears capable of running into the money. The five-year-old has found it hard to match the speed early on in the sprint races and will be tried over the 1700M for the first time. (7) CHAMP QUEEN is a last start winner over this distance. The filly showed a nice turn of foot to run down her opposition last start. The time was not overly fast, but she should prove competitive in this event.

It’s about time (7) D K PURMIR got a victory. The Orb gelding comes in off three runner-up finishes and a 3rd from his four starts to date, not doing much wrong on each occasion. He has been sent off as favourite in three of those races but we’re going to give him another chance here on his first try at 1400M. (11) IRON SOCKS looks to be the most credible threat. He’s improved over three outings so far culminating in 3rd last time over 1200M. He too steps up in trip and it may well suit. (6) MY ROMEO has hinted at ability and looks set to make the early running. He’s registered some useful times and is another who the additional trip may suit. (2) JANGSAN START and (5) VICTORY KING are best of the rest.

The ninth on the card has a handy bunch of class 4 gallopers engaged and should be an interesting race to watch. (7) CHOIN GANGJA has shown plenty of promise early on in his career and looks one of the main chances. The son of Menifee ran some good races behind our best two-year-olds before disappointing favourite backers last time out. The horse oozes ability and can be forgiven for his performance. Moon Se Young will have his first ride on the galloper in the event. (4) FEDERAL CAT cannot be discounted and represents each-way value. The four-year-old missed the kick last time and ruined his chances of finishing in the money but did run on well and is worth including in your numbers. (2) GLOBAL THUNDER has won two in a row and a win would not surprise albeit against a rise in class. The chestnut had been camping off the leaders before showing a nice turn of foot over the sprint distances. (9) ROYAL PIRNCE is capable of bobbing up for a place every now and then. He is lightly weighted and will be hitting the line strong.

(4) EAST JET is a winner of three from four so far and comes in here up in class off a bullet victory three weeks ago. The step up in class is of little concern although it’s worth noting that his only disappointing run to date came over this distance. Nevertheless, he’s the one to beat. (2) JEONGJOUI KKUM has also done his best work the minimum distance but he too steps up in class with solid claims to go close. The pair of them should be disputing the early speed. (12) DIXIE AGAIN won three of four starts last year before suffering a setback. He returns to action for the first time since July having run 2nd in a very fast trial in December and while he’ll likely need this run, he can place. (9) GEUM ROYAL and (11) TIAGO TOUCH are other contenders for minor money.

A number of these raced each other over 1800M on January 11th. (7) MR. TURNER finished the best of them, coming from off the pace to run 3rd. That was his second consecutive 3rd place finish and he looks nicely in here to secure what would be just his second career win. He’ll come from off the pace once more. (3) DONGBANGUI GIEOK came home 4th in that race, not too far in arrears. Still maiden, he has five runner-up finishes to his name and while he will probably find one or two too quick again, he can hit the board once more. (10) DEOBUREO SOOP comes in off two promising performances, running 2nd last start in a competitive race over a mile. He has experience of this distance and should be a factor here again. (2) KING MESSENGER and (4) JOUNIGA, who has actually won at this distance already, are others in at least the placing hunt

(2) ACTIMON drops back in trip after a decent showing in a tough race over 1800M a month ago. Last time he raced at this distance, he was a winner, albeit at class 3 level, and the Verrazano gelding can win again today. (1) KILIUI JEWANG led almost the entire way around at class and distance on December 15th, only to get overhauled late on. From the inside, he’ll be on the early speed again and can go close. (6) MUNHAK ARIARI and (10) PRIMA QUEEN came home 3rd and 4th when they raced each other over 1200M in December. Both can aim to match or better than here with Munhak Ariari the preferred of the pair again. (4) CRAZY FACTOR another with placing chances.