The season finale Grand Prix Stakes takes place at Seoul Racecourse on Sunday. It’s no longer the richest race in the nation, nor the biggest in terms of betting, but it’s the oldest race on the Korean calendar and one that everybody wants to win. This year the race is sponsored by MBC and will be shown live on their MBC Sports+ channel. There are 11 races at Seoul from 10:45 to 18:00 while at Busan there are 6 from 12:40 to 17:10. 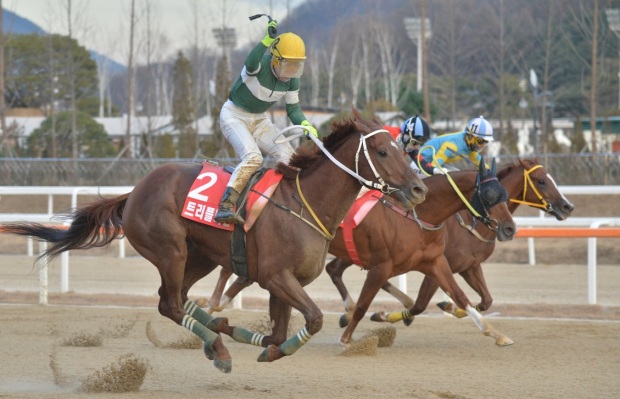 A year ago, Triple Nine beat Cheongdam Dokki and Today to land the Grand Prix at the fourth time of asking (Pic: Ross Holburt/KRA)

Cheongdam Dokki, 4th two years ago and runner-up last year, is set to be favourite. Here’s the long version of the video preview:

And the shorter version:

It's the Grand Prix Stakes at Seoul tomorrow – here's a two minute preview of the big race going over all the top contenders! @Roycee28 pic.twitter.com/NUpDRGmI56

And race by race for Seoul:

The first on the card will see twelve Korean-bred gallopers go over the short course. Hansen filly (3) ONE AND ONLY gets a good opportunity to notch a win at her second start. She was good on debut when finishing fourth running a fast time when compared to her opposition in this assignment. She has drawn well and should take improvement from her first run. (6) LADY KELLY trialed well when qualifying for her first start. She was strong through the line and should be ready for a forward showing at her first start. (5) BAEKSAN THUNDER sat on speed at her first start before feeling the pinch late. She still clocked a good time given the track rating, expect improvement as from the Thunder Moccasin filly. (9) GRAND FLY looks the best of the rest handing in a fair trial performance.

A field of twelve Korean bred maidens will go over the 1300m in the second event. (11) P.K. DOLPUNG was much-improved last time out when finishing second behind Jangsu Nabom. Lee Hyeok put him into the race early last start and it is assumed that he will employ those tactics once again. He has drawn wide but look for him to come across shortly after they jump. (7) SISEONJIPJUNG ran on strong from well last time out over the 1300m. Well performed rider Lim Gi-Won will ride the Volponi colt for the first time. He struggles to muster speed early so expect another strong sectional from him. (3) SUN FIGHTING is a place chance if she continues to improve. She is lightly weighted and has drawn well. (9) ACE SHINE has placed at his past two starts. He drops back significantly in distance to 1300m and will have to lump the top weight from a wide draw. Johan Victoire, who comes off a riding treble last weekend will be looking to settle the Colors Flying colt in the first half of the field.

The third on the card is wide open with several chanced engaged. Two-year-old filly (10) GEOSEN JILJU saluted over this distance last start when breaking maiden status is Class 6 company. She posted an impressive time for this class when leading throughout, expect Park Eul-Woon to work forward from the wide draw and try and take up the running once again. (6) YEONGGWANGUI BEAT cannot be discounted as a winning chance. The Clear Attempt gelding ran on last start from near last to finish second behind Dynamic Punch. Yoo Seung-Wan will be legged aboard him for his assignment, it appears he has options as the horse has previously been settled both on speed or worse than midfield. (4) KINGLY is still looking for his first victory but ran a handy race last time out in this END_OF_DOCUMENT_TOKEN_TO_BE_REPLACED